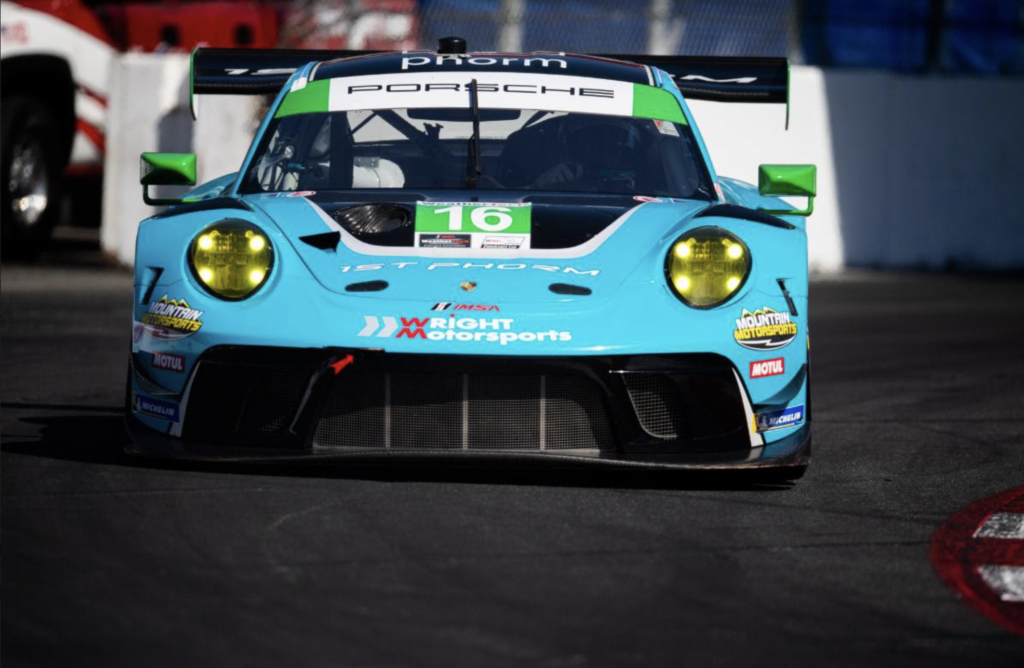 BATAVIA, Ohio. (May 31, 2022) — The Motor City will host the sixth round of the IMSA WeatherTech SportsCar Championship this weekend on the temporary street circuit of the Raceway on Belle Isle, an island situated on the Detroit River between Detroit, Michigan and Windsor, Ontario. The conclusion of the Chevrolet Detroit Grand Prix Presented By Lear will mark the halfway point of the 2022 season, which started with Porsche customer racing team Wright Motorsports winning the Rolex 24 At Daytona. The No. 16 1st Phorm Porsche 911 GT3 R of drivers Ryan Hardwick and Jan Heylen will be one of 16 entries competing in the 100-minute sports car racing event on Saturday, June 4.

“Detroit is a special city with such a strong history in the automotive industry,” said Team Owner John Wright. “We’re proud to be racing in the final event at Belle Isle and hope to reach the halfway point in the season by returning to where we started: at the top step of the podium and with the points lead. We kicked the season off strong and are looking strong in the championship hunt.”

With exciting wins at the Rolex 24 At Daytona and the WeatherTech Raceway Laguna Seca, Wright Motorsports stands second in the GTD class team standings, with Hardwick and Heylen also holding second place in the driver standings.

Saturday’s race will be a 100-minute sprint, the shortest race length on the 2022 IMSA WeatherTech schedule. Qualifying position and flawless pit stop execution will be vital for a desirable finish in the Grand Prix, as the right 2.30 mile, 14-turn track can make passing difficult and the concrete walls on both sides of the circuit unforgiving of errors. The 2022 Detroit Grand Prix will be the final running of the circuit’s two-decade run, for in 2023, the event will return to the streets of downtown Detroit, where it first began in 1982.

With the exclusion of the GTD Pro class in the weekend’s activities, the Wright Motorsports Porsche will again be the sole entry for the German manufacturer, proudly representing the marquee the team has raced for the last two decades.

The Chevrolet Detroit Grand Prix Presented By Lear begins on Saturday, June 4 at 3:00 PM Eastern, airing live on the USA network, and also streaming live on Peacock. Fans outside the United States can stream live on imsa.tv, or visit the IMSA International Coverage page. Race fans can also watch the race live in its entirety from the Wright Motorsports Porsche via two onboard cameras on www.imsa.com/tvlive.

Ryan Hardwick
I’m excited to be racing back in Detroit. I really enjoyed this street circuit back in 2019 when I first competed here. I love the 100-minute format because it puts a lot of emphasis on strategy and the pit lane, which are two areas where our Wright Motorsports team excels. Looking forward to the challenge.

Jan Heylen
It’s been a few years since I’ve been to Detroit. I love the street course, so I’m looking forward to being back to a tight course, which should suit the Porsche well. It’s a race that Ryan is looking forward to since he has prior experience in a GT3 car there. I think we’re setting up for a good weekend and I can’t wait.