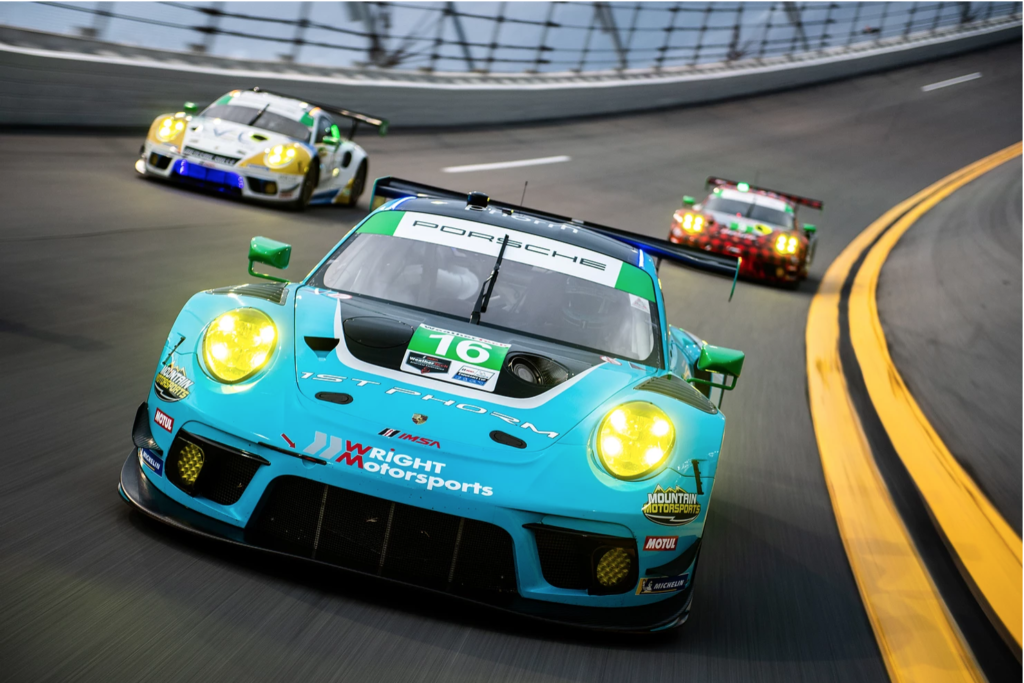 DAYTONA BEACH, Fla., (January 26, 2021) – Race week for the 59th Rolex 24 At Daytona kicks off this Thursday, and Wright Motorsports will run their first official race event of the 2021 season pulling double duty in both the IMSA WeatherTech SportsCar Championship’s Rolex 24 at Daytona and the Michelin Pilot Challenge’s BMW Endurance Challenge. The longtime Porsche customer racing team, sponsored by 1st Phorm, Mountain Motorsports, and Una Vida Tequila will take part in a total of eight practice or qualifying sessions between the two programs, building up to Friday’s Michelin Pilot Challenge race and the Rolex 24 on Saturday and Sunday. The two events total 28 hours of racing over the course of the two days.

IMSA WeatherTech SportsCar Championship
The entire IMSA field just completed the Roar Before the 24, an official four-day series event, allowing teams sufficient time to test and shakedown the race cars before the main event. This year’s Roar introduced a new addition to the format: a 100-minute qualifying race to set the grid for this Saturday’s 24 hour long endurance racing event. An incident in night practice resulted in the team switching to another chassis after qualifying for the Motul Pole Award 100, moving the team’s starting position back from pole position to 19th place. However, determination by the crew to make it to the grid in time with a competitive car proved beneficial and together the team, with drivers Ryan Hardwick and Patrick Long, gained ten positions during the race, also breaking into the top ten to start Saturday’s Rolex 24 at Daytona from ninth on the grid.

Hardwick and Long will be joined by returning drivers Jan Heylen and Klaus Bachler, who both drove with them in the No. 16 Porsche 911 GT3 R for select WeatherTech races in 2020.

The 3:40PM Eastern start of the 59th Rolex 24 at Daytona will air live on NBC for the first hour, then move to NBC Sports, Saturday, January 30. For just $3.00, fans can watch the race live with no interruptions on NBC Sports Gold’s TRACKPASS, which is available on smart TVs, tablets, computers, and cell phones. IMSA Radio is slated to provide comprehensive coverage of all on track WeatherTech sessions worldwide, and international audiences can find their Rolex listings via imsa.com/internationalcoverage.

Michelin Pilot Challenge
The team made their 2021 Michelin Pilot Challenge debut last week as well, immediately showing they will be strong contenders for the new season’s championship. As the Roar Before the 24 progressed, the No. 16 Porsche 718 Cayman GT4 Clubsport’s lap times and finishing positions improved with each session, with the team finishing the final session in first place. This weekend’s event will consist of three practice sessions, beginning Wednesday afternoon, followed by qualifying on Thursday, January 28. The BMW Endurance Challenge will begin on Friday, January 29th, and be one of only two races on the 2021 calendar to have a runtime of four hours.

The broadcast of the BMW Endurance Challenge will air live on NBC Sports Gold’s TRACKPASS, or imsa.tv for international audiences, beginning at 1:30PM Eastern. IMSA Radio will also offer coverage of this session only. For all event information, visit imsa.com

Ryan Hardwick
No. 16 Wright Motorsports Porsche 911 GT3 R
No. 16 Porsche 718 Cayman GT4 Clubsport
Personally, I am really looking forward to the Rolex race weekend. More so than just about any other race weekend that I can remember. I can’t wait to compete in my first Michelin Pilot Challenge series race, and also drive in my 3rd consecutive Rolex 24 hour. I am coming off a weekend at the Roar where I did some of the best driving of my life, and I’m ready to show that same pace when it counts this weekend in the Rolex. I’m confident that our Wright Motorsports team is the most prepared team in the GTD field, and that my co-drivers are all as eager as I am to go for the win this weekend.

Patrick Long
No. 16 Wright Motorsports Porsche 911 GT3 R
This is a deep field of great entries, and a top-five is going to be a real challenge. We had a phenomenal Roar week right up until night practice when it all fell apart. We dug deep and the team did an amazing job to get us onto the grid for the qualifying race. The qualifying race was a pretty messy affair. Cars were all over the place, but we are proud of the team effort that was able to get these laps under our belt and gain some data with this new car. We’ll push on to the Rolex.

Jan Heylen
No. 16 Wright Motorsports Porsche 911 GT3 R
No. 16 Porsche 718 Cayman GT4 Clubsport
It’s nice to be back at Daytona for the 24 hours. I think we had a lot of good things happen for us in the Roar. A few things didn’t come our way, but all in all, we have a team that is very well prepared for this event, and we have a big week ahead of us. We’re with the best team in the paddock, so I know preparation won’t be an issue. The Porsche in general is competitive, and if it were come down to the last hour in the race, we have a car we can fight with. I’m looking forward to the start of the races. It’s nice to be here with Patrick and Ryan again, and having Klaus with us again. We have a good team and a good lineup.

Klaus Bachler
No. 16 Wright Motorsports Porsche 911 GT3 R
I’m looking forward to being back here to race next weekend at the 24 hour race. Great job by the whole team to bring us back so we could do the qualifying race. The car was well prepared for this event. Now we have a few days where they can fully prepare the new car. I’m looking forward to getting back on track again. Hopefully we have a good result and finish well.