EVENT PREVIEW: Wright Motorsports Looks Ahead to Next Round at Laguna Seca

EVENT PREVIEW: Wright Motorsports Looks Ahead to Next Round at Laguna Seca 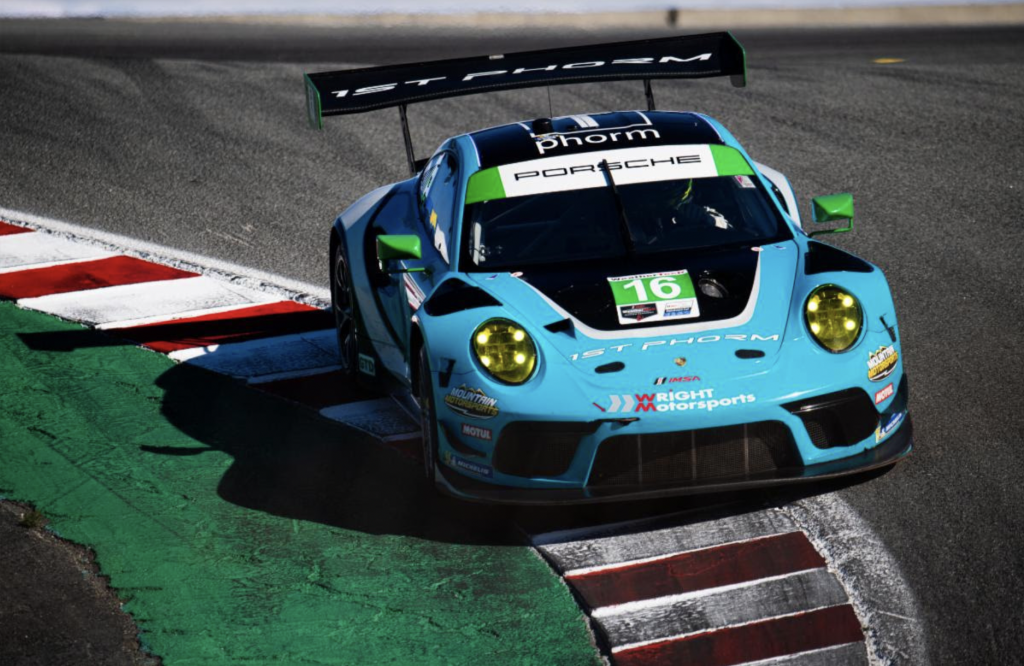 SALINAS, Calif., (April 26, 2022) – The IMSA WeatherTech SportsCar Championship and Porsche Carrera Cup North America Presented by the Cayman Islands return to California this weekend, and Wright Motorsports is ready for a packed event, racing four Porsches at WeatherTech Raceway Laguna Seca. The No. 16 1st Phorm Porsche 911 GT3 R will run in Sunday’s headlining event, and the three Wright Carrera Cup entries will race on Saturday and Sunday in support of the WeatherTech Series.

“It’s always great to race at WeatherTech Raceway Laguna Seca,” said Team Owner John Wright. “This kind of circuit suits our Porsche well, and we have a lot of experience here. Following our successful recent test, we feel ready to head into this weekend’s races.”

The Hyundai Monterey Sports Car Championship Presented by MOTUL is the fourth round of the 12-round WeatherTech SportsCar Championship and will include four of the five classes in the series. Thirty-two entries are set to compete in the event, with the GTD class being the largest with 14 cars entered. The GTD class has proven to be highly competitive this year, and Wright Motorsports is in good standing after winning the first round of the season, the Rolex 24 At Daytona in January. The team currently stands third in the battle for the championship and should be a strong contender for this weekend’s festivities.

Following the Grand Prix of Long Beach, where the No. 16 Porsche 911 GT3 R gained the most positions during the short sprint race, the Wright GTD squad drove to Salinas, California to begin preparations for this weekend’s event. The team capitalized on the quick, two-day test at the 2.238-mile, 11-turn circuit. Drivers Ryan Hardwick and Jan Heylen were able to work with the team’s engineers, testing various setups and adjustments to get the car ready for the first two-hour, 40-minute race of the year.

In 2021, the team started the event from pole position here and celebrated their third podium of the season, showcasing the strength of the Porsche on the flowing circuit. Drivers Ryan Hardwick and Jan Heylen have high hopes heading into the California event, aiming to roll off the truck with a competitive package and return to the podium once again.

The Hyundai Monterey Sports Car Championship Presented by MOTUL will air live in its entirety on NBC, beginning at 12:10 PM PT on Sunday, May 1. IMSA Radio will offer coverage of qualifying and the race, streaming free for all audiences. For additional event information, visit imsa.com.

Ryan Hardwick
Laguna Seca has always been one of my favorite racetracks to visit. The atmosphere and weather are always great, and I’ve personally had a lot of fun racing there over the years. The lack of grip makes it especially challenging for all the drivers, but that’s what also makes it a fun race! Our team had a solid test day there right after the Long Beach race, so we are looking to be very competitive, and aiming to get back on the GTD podium at this race. Looking forward to it!

Jan Heylen
We’re heading back to California. We all like going to Monterey and are looking forward to our next race at Laguna Sea. This is a good track for Porsche so we should have a strong, competitive package. We finished a productive test at Laguna where Ryan and I felt good in the car. We’re ready for the weekend and hoping to come away with as many points as possible for our run in the championship.

Porsche Carrera Cup North America Presented by the Cayman Islands
After racing on a tight, concrete jungle street circuit like Long Beach, the Porsche Carrera Cup North America field will be pleased to run on a circuit like WeatherTech Raceway Laguna Seca. Its 180 feet in elevation change, wide runoffs, and sweeping turns are a stark contrast to the previous circuit and will provide ample room for the battles expected from the 34 entries. John Goetz, Hutton McKenna, and Varun Choksey will represent Wright Motorsports, competing in the two-race event, racing Saturday, April 30 at 1:50 PM PT, Sunday, May 1 at 8:40 AM PT. Both races will stream live on Peacock and free on imsa.com/tv.