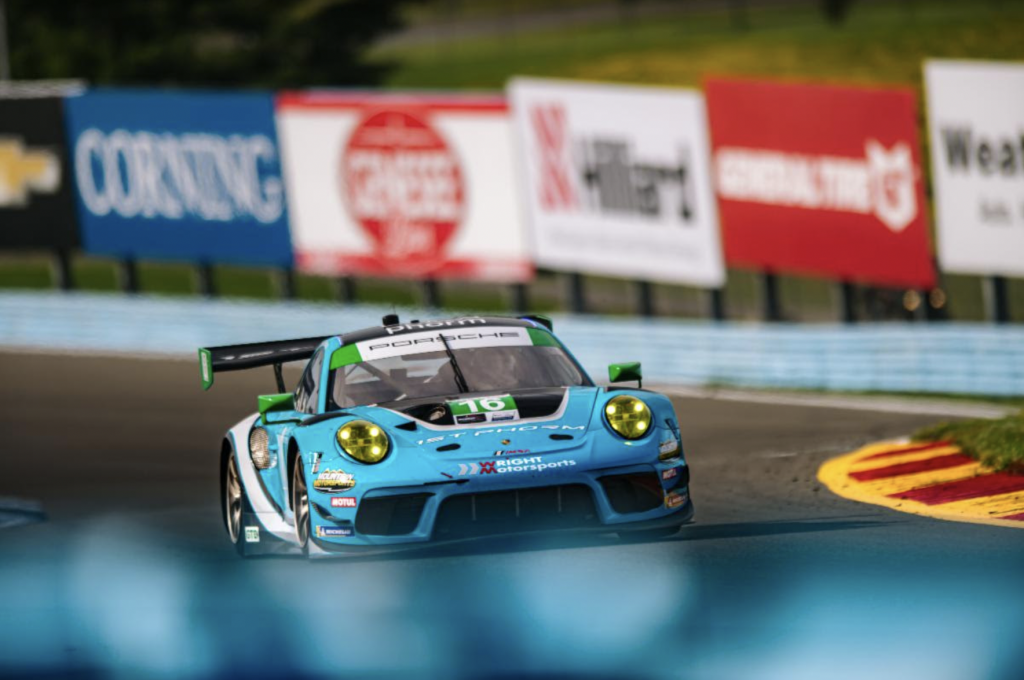 WATKINS GLEN, N.Y., (June 21, 2022) – With six of the twelve rounds of the IMSA WeatherTech SportsCar Championships complete, the famed Watkins Glen International will kick off the second half of the season with the Six Hours of the Glen. Porsche customer racing team Wright Motorsports will take part in the event with the No. 16 Porsche 911 GT3 R, piloted by drivers Ryan Hardwick, Jan Heylen, and Zacharie Robichon. The GTD-class entry will be supported by the team’s three Porsche 911 GT3 Cup cars, competing in the Porsche Carrera Cup North America Presented by the Cayman Islands double-header.

“While our team is strong and on point no matter the event, Wright Motorsports always really shows our strength in the endurance rounds,” said Team Owner John Wright. “From the quality of our drivers to having one of the fastest crews in pit lane, we have a good outlook for this weekend. After a couple of challenging sprint rounds, we know we have a good opportunity to score some championship points this weekend at the Glen.”

IMSA WeatherTech SportsCar Championship
Entering round six of the IMSA WeatherTech SportsCar Championship, Wright Motorsports will have two championships in mind: the full season-points battle and the IMSA Michelin Endurance Cup (IMEC), the four-race endurance championship within the full season schedule. The team, along with the endurance driving lineup of Ryan Hardwick, Jan Heylen, and Zacharie Robichon hold third place in the IMEC championship, in both the team and driver standings. The group, along with fourth driver Richard Lietz, won the 2022 Rolex 24 at Daytona, and salvaged a 10th place finish at the Twelve Hours of Sebring when a mechanical issue set the team several laps down from the leaders. With two endurance rounds remaining, the defending IMEC champions have high hopes of defending their title.

In the full-season championship, the team has a strong grasp on second place in the GTD class, behind the No. 32 effort of Korthoff Motorsports. With two podiums and an additional top-five finish, the Wright Motorsports squad has had its share of attrition in the last six races but is geared up and ready to go for the Sahlen’s Six Hours of the Glen.

The six-hour endurance event will host 49 entries across the five classes, marking the first time all have raced together since the Mobil 1 Twelve Hours of Sebring in March. The GTD class will be comprised of 17 entries, making it the class to watch in this highly competitive season. The class will feature an all-out battle of the manufacturers, highlighting the Wright Motorsports Porsche racing against the makes of BMW, Lexus, Ferrari, Aston Martin, Mercedes, Lamborghini, McLaren, and Acura.

The Porsche team tested at the upstate, New York track several weeks ago, getting a jump ahead on the preparations of a busy race weekend. Since the test, both Heylen and Robichon completed impressive runs at the 24 Hours of Le Mans, with Heylen finishing fifth in the GTE Am class.

Sahlen’s Six Hours of the Glen will take the green flag at 10:40 AM Eastern, airing live in its entirety on Peacock. International audiences can watch via imsa.tv, or visit imsa.com to check local listings.

Ryan Hardwick
Watkins Glen has always been my favorite racetrack in North America. Nothing quite matches the feeling of putting in a quick lap around this place! Our team had a solid test here a few weeks ago, and I’m expecting us to bounce back after a couple of poor performances these past few events. I’m excited to have Zach back with us for this race, both he and Jan are coming back from strong drives at Le Mans, and I know they are both ready to fight hard for our team at the Glen.

Jan Heylen
I’m looking forward to having Zach back in the car and back to real endurance racing. It’s a track well-suited for the Porsche. We’ve always done well there. We’re looking forward to getting some points back after our runs at Mid-Ohio and Detroit. A podium would be nice, but we’re mostly looking at getting back in the points battles for the endurance and overall championships.

Zacharie Robichon
I’m looking forward to having Zach back in the car and back to real endurance racing. It’s a track well-suited for the Porsche. We’ve always done well there. We’re looking forward to getting some points back after our runs at Mid-Ohio and Detroit. A podium would be nice, but we’re mostly looking at getting back in the points battles for the endurance and overall championships.

Porsche Carrera Cup North America Presented by the Cayman Islands
The trio of Wright Motorsports Porsches will resume their Carrera Cup racing season at Watkins Glen, after an almost two-month break. A total of 34 entries will compete in the event, split into three classes: Pro, Pro-Am, and Am. Hutton McKenna (No. 88 Porsche 911 GT3 Cup), and Varun Choksey (No. 13 Porsche 911 GT3 Cup) compete in the Pro class, and John Goetz (No. 57 Porsche 911 GT3 Cup) completes the lineup in the Am class. So far this season, Goetz holds the team’s four podium finishes, and six top-five results. McKenna and Choksey have been improving in the higher-ranked class with each race, building on the success of their growth as young drivers. Race one at Watkins Glen International will take place on Friday, June 24, at 1:25 PM ET, followed by race two on Sunday, June 25 at 11:05 AM ET. Both races will air live on porschecarreracup.us and imsa.com/tv.