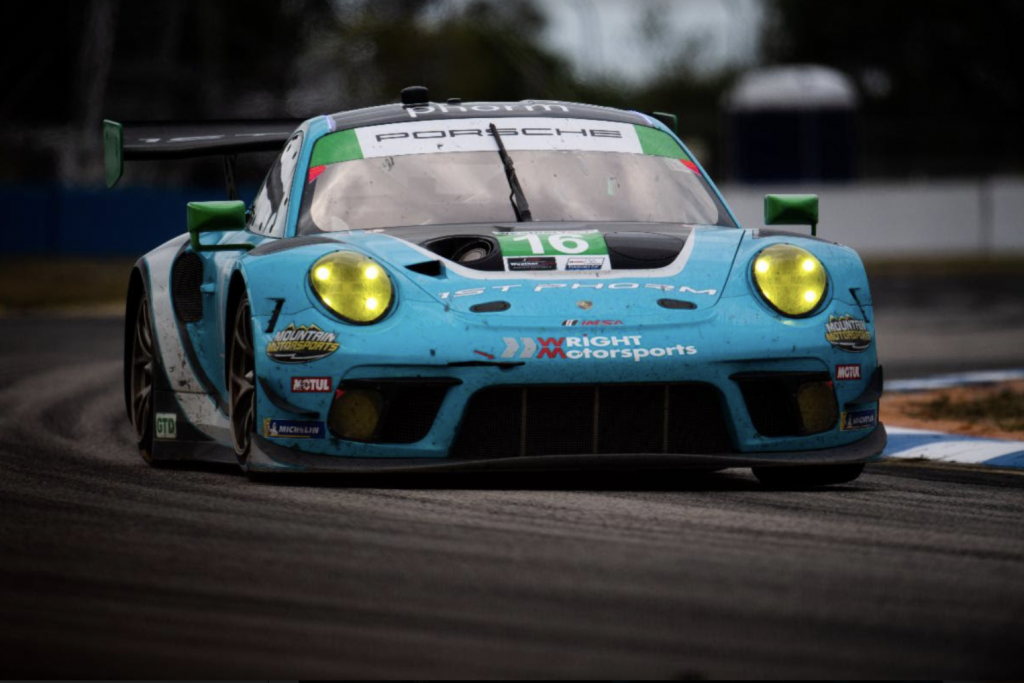 BATAVIA, Ohio, (March 15, 2022) — Following a monumental race win at the prestigious Rolex 24 At Daytona, this weekend Wright Motorsports heads into the next round of the IMSA WeatherTech SportsCar Championship: the Twelve Hours of Sebring. The Porsche customer racing team leads the GTD class points in both the team and driver standings after securing the biggest win in the team’s history to date. The Rolex 24-winning drivers Ryan Hardwick, Jan Heylen, and Zacharie Robichon will pilot the No. 16 1st Phorm Porsche. The John Wright-owned operation is determined to maintain the team’s 2022 success, as well as continue the two-year podium streak the team holds at Sebring International Raceway.

In 2020, the team secured victory at the Twelve Hours of Sebring, surviving early race contact and persisting through a broken shock to take the big win with drivers Ryan Hardwick, Patrick Long, and Jan Heylen. The following year, the No. 16 1st Phorm Porsche started from pole position and led many laps of the race with Patrick Long, Jan Heylen, and Trent Hindman, ultimately finishing second in a Porsche 1-2 result. The team’s strength at Sebring combined with recent success at the Rolex 24 at Daytona will assuredly maintain the team’s standing as a competitor to keep a close watch on.

“We’re still very much riding the high from the Rolex 24 At Daytona,” said Team Owner John Wright. “That was an incredible moment in our team’s history, but as soon as the event was over, it became time to focus forward and get ready for the rest of the season. Our team is ready, our car is prepared, and the drivers are focused. Momentum and consistency are on our side, and we are ready for an event that always demands the most from its competitors.”

The Twelve Hours of Sebring always provides race participants with a unique experience. Constructed on a portion of Hendricks Army Airfield—now Sebring Regional Airport, Sebring International Raceway is known amongst sportscar fans for its bumpy surface. The mix of concrete and asphalt surfaces across its 3.741-mile, 17-turn surface reflects great amounts of character from its early days in the 1950s, lacking the frequent repaving procedures that most modern-day tracks undergo.

On-track activities for the 70th Annual Mobil 1 Twelve Hours of Sebring Presented by Advance Auto Parts begin on Thursday, Mach 17, which will have three practice sessions throughout the day. Participants of the IMSA WeatherTech SportsCar Championship will qualify on Friday afternoon, then partake in the series-wide driver autograph session in the paddock. The 51-car field will take the green flag for twelve exciting hours of racing beginning on Saturday, March 19 at 10:10 am. Fans in the United States can listen to IMSA Radio’s live coverage of all sessions and stream the race live it its entirety on Peacock, NBC Universal’s streaming network. Fans outside the USA can check IMSA’s International coverage page for local listings.

Ryan Hardwick
Sebring is without a doubt the toughest and most grueling race of the year. Our team has a lot of momentum coming off of the monumental win in the Rolex 24 At Daytona, and we are not planning to let our foot off the gas heading into Sebring! Our Wright Motorsports team has been hard at work preparing for this event, and I’m confident we will have a strong car that will handle all the bumps and challenges that Sebring always throws at us.

Jan Heylen
The Twelve Hours of Sebring is one of the biggest races of the year and definitely one of my favorite events of the season. It’s a good atmosphere with fans camping out, and it’s always an event I really look forward to. Coming off Daytona with the win, there’s obliviously a lot of good momentum on our side. We have a good track record at Sebring. Going into the event leading the championship puts a lot of healthy pressure on the team to perform. I know that we’re always well prepared and I hope we can give the team, Porsche, Ryan, and 1st Phorm another win at Sebring. I can’t wait to get the weekend started.

Zacharie Robichon
Coming off our success at Daytona and my class victory in 2021 at Sebring, I’m more motivated than ever to continue our success. I think we have a good chance at a strong race, and I know the team will continue to give us a car capable of fighting for victory. These long races are always so unpredictable. Therefore, we’ll do our best to be smart for the first nine hours and make sure we have a car ready for a battle at the end.