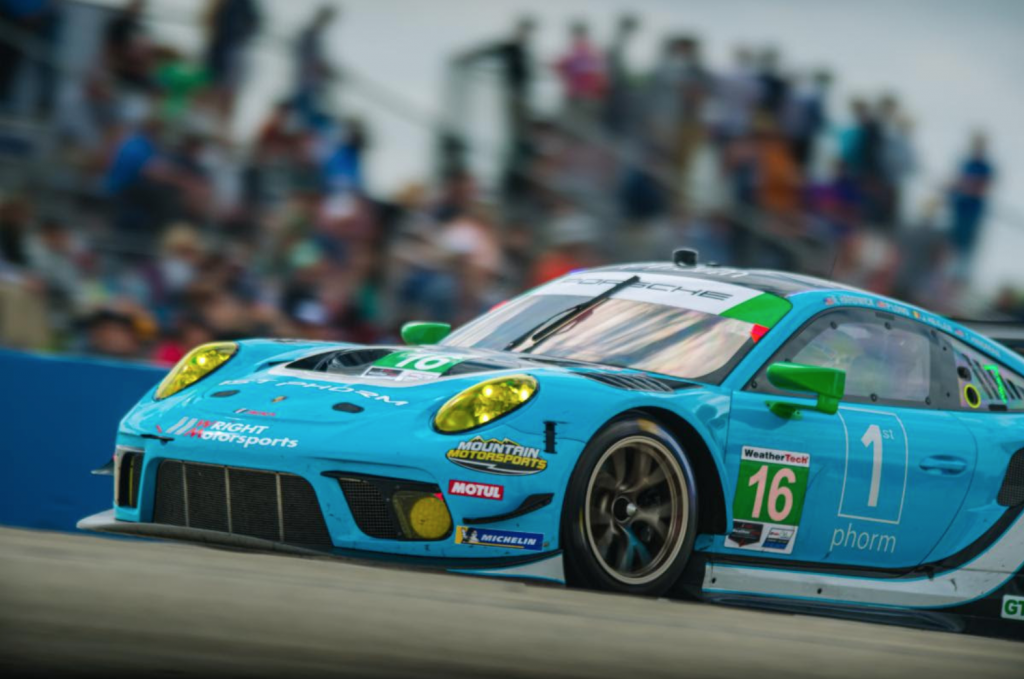 BATAVIA, Ohio, (May 11, 2021) – Wright Motorsports will enjoy the home track advantage this weekend at Mid-Ohio SportsCar Course in Lexington, Ohio for the next rounds of the IMSA WeatherTech SportsCar Championship and Michelin Pilot Challenge. After a three-month hiatus, driver Ryan Hardwick will return to the team, just in time to take part in the team’s home race weekend.

“We’re always glad to be racing at Mid-Ohio,” said Team Owner John Wright. “It’s great to be able to race at our home track, and to have Ryan finally back behind the wheel brings an extra boost to the weekend. We’re thrilled to have him back and look forward to both races this weekend.”

Following an injury resulting from a crash in January, driver Ryan Hardwick has undergone months of intense recovery and training to prepare for his return to the series. Two weeks ago, Hardwick got back behind the wheel of the No. 16 Porsche 911 GT3 R for the first time since January at a private test with the team at Mid-Ohio SportsCar Course. The test was deemed a success, and now the team will focus on continuing their momentum from the season to put in a strong result at their home track.

IMSA WeatherTech SportsCar Championship
The relationship between Wright Motorsports and Hardwick has proven to be a successful one, with the team earning one of their first podiums together with the 1st Phorm athlete in 2020 at Mid-Ohio SportsCar Course. With other full-season driver Patrick Long, Wright Motorsports finished second in the GTD team and driver standings, capping the year off with a victory at the Twelve Hours of Sebring. In January’s Roar Before the 24, Hardwick earned pole position for the qualifying race, which would have set the grid for the Rolex 24 At Daytona.

While Hardwick recovered from his January incident, the team pressed on, earning a second consecutive fourth-place finish at the Rolex 24 with Patrick Long, Jan Heylen, Klaus Bachler, and Trent Hindman. Long, Heylen, and Hindman had a character-building race at the Twelve Hours of Sebring two months later, but the entire team pulled together to earn a second-place finish, and now lead the GTD team and driver points.

This weekend’s event will feature only three of the five WeatherTech classes: DPi, LMP3, and GTD. The first practice will take place on Friday evening, May 14, followed by two more sessions on Saturday. Race day will kick off on Sunday morning with a 20-minute warm-up session, and the Acura Sports Car Challenge Presented by TLX Type S will take the green flag at 2:40PM Eastern. As the first sprint race in the 2021 schedule, the run time will be two hours and 40 minutes, airing live starting at 2:30PM on NBCSN. Fans without a cable subscription can stream live via NBC Sports Gold TRACKPASS, and fans outside the U.S. can watch on imsa.tv.

Ryan Hardwick
No. 16 Wright Motorsports Porsche 911 GT3 R
I am so excited to be back in the driver’s seat for Mid-Ohio! First and foremost, I want to thank my family for their continued love and support over the past three months as I’ve been working through my recovery following the accident in Daytona. I also want to thank the team of doctors and physical therapists who I’ve been working with at the Shepherd Center in Atlanta. They have been phenomenal to work with. It’s been tough being out of the car for so long, but I’ve been putting in the work, and I am ready to pick up right where I left off when I qualified at the top of the GTD field at the ROAR in Daytona. I had a really strong couple of test days at Mid-Ohio a couple of weeks ago, and I’m feeling really good in the car. It’s great that Mid-Ohio is going to be my first race back because I’ve had a lot of success there over the years. I’ve stood on the GTD class podium each of the past two seasons at Mid-Ohio, so I’m focused on helping our team get back up there again this year. I’m also really looking forward to competing in the GT4 as well. The Michelin Pilot Challenge series is as tight as ever, and our Wright Motorsports Cayman showed a lot of great pace in Sebring with Jan and Max Root at the wheel. I can’t wait to get out there and see how I stack up against such a competitive field.

Patrick Long
No. 16 Wright Motorsports Porsche 911 GT3 R
I love the Mid-Ohio culture and old-school traditional road course layout. It’s a home race for the Wright Motorsports crew and having Ryan back in the car brings double anticipation and excitement to this coming week.

Michelin Pilot Challenge
Though the team missed January’s opening round of the Michelin Pilot Challenge, they did not miss a beat, in round two at Sebring International Raceway, rolling off the truck with a competitive car and driver lineup. Wright Motorsports driver Max Root, 2020 GT World Challenge America Am champion, stepped up to fill in for Hardwick, earning a pole position and second-place finish with co-driver Jan Heylen in the No. 16 Porsche 718 Cayman GT4 Clubsport, while also racing in the Porsche Carrera Cup North America. Hardwick will resume his place as a full season this weekend, starting with Saturday’s two-hour race, the Mid-Ohio 120. The race will begin at 3:35PM Eastern and can be streamed via the NBC Sports Gold TRACKPASS.

Ryan Hardwick
No. 16 Porsche 718 Cayman GT4 Clubsport
The Michelin Pilot Challenge series is as tight as ever, and our Wright Motorsports Cayman showed a lot of great pace in Sebring with Jan and Max Root at the wheel. I can’t wait to get out there and see how I stack up against such a competitive field.

Jan Heylen
No. 16 Porsche 718 Cayman GT4 Clubsport
We’ve been waiting since Daytona for Ryan to make his return! We’re all super excited to have him back in the car and kick off the season with him. We had a good run in Sebring and I hope we can come away with more points at Mid-Ohio to put us back in the championship hunt. I love coming to Mid-Ohio. It’s a real driver’s track and it’s the home track for Wright Motorsports. The shorter straight away and the tight corners should be a good fit for the Porsche.