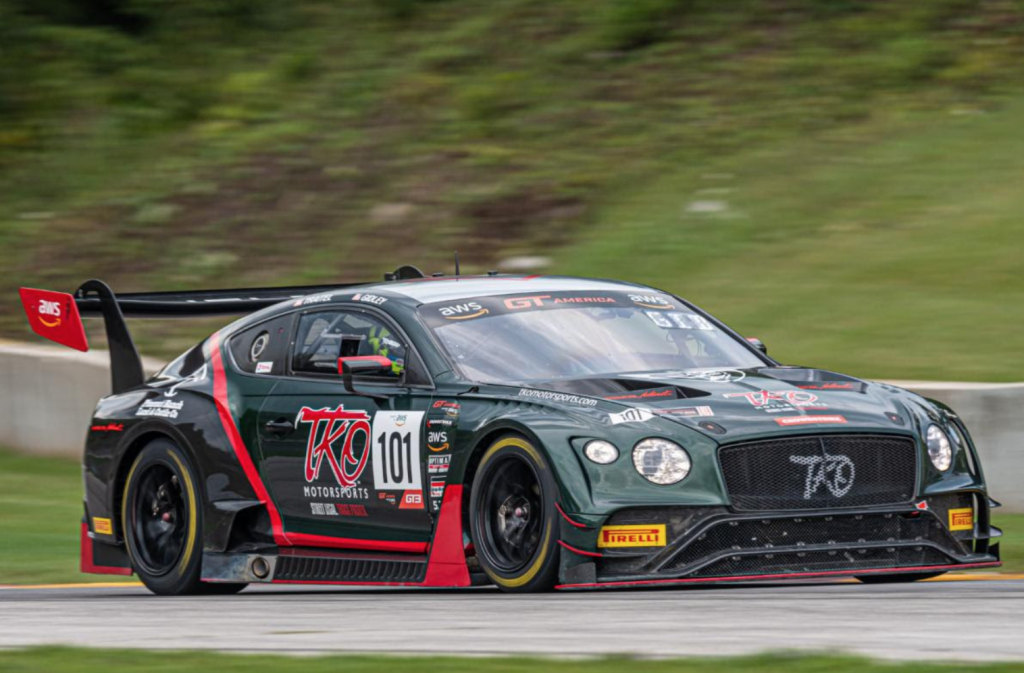 SEBRING, Fla., (September 29, 2021) – Five years have passed since Flying Lizard Motorsports has raced at Sebring International Raceway, and this weekend, the team makes its return to the legendary track for a double-header race event in the GT America powered by aws. The black, grey, and yellow Lizard-liveried Porsche 911 GT3 R of Andy Wilzoch and the green and red TKO Motorsports Bentley Continental GT3 driven by Memo Gidley will contest in the weekend, joining the field of 23 cars.

“We are all looking forward to returning to Sebring,” said Program Manager Darren Law. “It is a special place with so much history. I have so many memories here from my days driving for Flying Lizard Motorsports and always enjoy racing there. Andy has raced at Sebring many times before and he is coming off a great race weekend at Watkins Glen. He has been driving really well this season and the Porsche is always good at Sebring, so I am hopeful we can carry that momentum into this weekend. As far as the TKO Bentley, this will be the first time we have ever run this car at Sebring. I am excited to see how Memo and the car do at this bumpy course. The setup for a car here isn’t like any other track and one strength of the Bentley is how compliant it is over bumps. It should be a great weekend!”

Built on the site of Hendricks Army Airfield, the track itself has its own storied history, acting as a training base for B-17 pilots in the 1940s. The first on-site sports car race took place in 1950, and the circuit eventually became the host of the Twelve Hours of Sebring, one of the most famous endurance events in North America. Known for its lack of elevation but bumpy surface of asphalt and concrete, the 3.74, 17-turn course offers high-speed corners and two long straights, producing exciting action with every event.

The team last raced at Sebring International Raceway in 2016, and the track holds many memories for the team and their sports car racing fans. The most memorable Sebring outing for the team took place in 2007, when the No. 45 Porsche of Jörg Bergmeister engaged in an exciting final lap battle with Jaime Melo in the No. 62 Ferrari. The battle, rated by Lizard fans as number two in the team’s top-10 moments in sports car racing, resulted in a photo finish as Bergmeister took the victory in the closest class finish in Sebring history at the time.

Andy Wilzoch and the No. 460 Flying Lizard Motorsports Porsche 911 GT3 R have had a strong season, earning two wins and an additional four podium finishes in his six-race partial season to date. Wilzoch is no stranger to victory circle and brings a strong determination to again have a Flying Lizard Porsche grace the top step at Sebring International Raceway.

After sitting out the previous two rounds at Watkins Glen International, TKO Motorsports with Flying Lizard is back with the TKO Bentley, eager to return to racing with Memo Gidley. The joint effort made its debut earlier this season at Road America, where Gidley drove the Bentley to a second-place finish in race one and was well on his way to a victory in race two when oil on track ended the team’s race prematurely. Gidley and the TKO Bentley have quickly become a fan favorite at the GT America events, bringing together two high-quality teams with an established manufacturer and well-loved driver.

Both of the 40-minute races will air live on YouTube.com/GTWorld, beginning at 1:15 PM Eastern on both Saturday, October 2, and Sunday, October 3. The event will be open to the public, and fans can purchase tickets for the three-day weekend for just $30.00. For more information, visit www.sebringraceway.com/sroamerica.

DRIVER QUOTES
Andy Wilzoch | No. 460 Porsche 911 GT3 R
Watkins Glen International had some ups and downs for us, but it was nice to be able to get more track time in the No. 460 Flying Lizard Porsche. Sebring should be a great circuit for this car, and I’m looking forward to getting more seat time. This series has a great field of teams and drivers, and I’m enjoying the level of competition it has to offer.

Memo Gidley | No. 101 Bentley Continental GT3
I am very excited to get back at Sebring and race the #101 TKO Motorsports Bentley GT3 with Flying Lizard. Our first race at Road America a few weeks ago, it was so great to get to know the Flying Lizard team crew because they work hard and are a pleasure to be around. And the TKO Bentley, people love this car, myself included! The Bentley is a big car and has such a distinct shape and unique rumble around the racetrack for fans to see and enjoy! A second place was nice at Road America, but I want to get the #101 TKO Motorsports Bentley to the top spot, and why not at a historic track like Sebring?