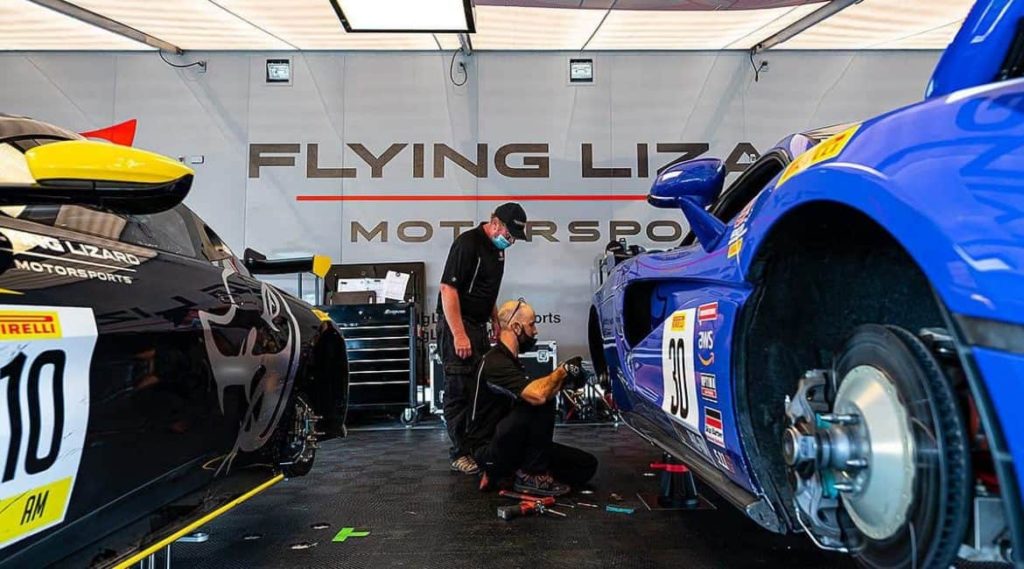 AUSTIN, Tex., (September 16, 2020) – As the 2020 season moves closer to its conclusion, the GT4 Americas championship returns to Circuit of the Americas this weekend for the second to last event of the year. Flying Lizard Motorsports will compete in four of the five rounds with its pair of Aston Martin Martin Vantage GT4s, driven by Michael Dinan and Robby Foley in Sprint and SprintX, and a McLaren 570S GT4 driven by Erin Vogel and Michael Cooper in SprintX.

“It’s great to be coming back to Circuit of the Americas,” said Program Manager Darren Law. “We did well when we raced here early in the year, and now we have almost a full season of development with these cars under our belts. We’re looking forward to getting on track and improving on our previous results.”

Michael Dinan
With eight wins so far this season, Michael Dinan continues to lead the Sprint championship by 67 points. The American race car driver has had a stellar sophomore season, sweeping the Sprint Am class wins at the VIRginia International Raceway and Road America triple headers. In SprintX, Dinan and co-driver Robby Foley have earned four wins and six podiums so far this season, sitting second in the championship points. Due to personal commitments, Dinan will be absent for on track activities on Saturday, missing Sprint race two and SprintX race two.

Robby Foley
Due to Dinan’s absence on Saturday, Robby Foley will only participate in Friday’s SprintX race one. The co-driver pairing did well at the Austin, Texas circuit in March, earning one podium and an additional top five finish. Holding second place in the championship, Dinan and Foley will have two remaining races to fight for the championship at the season finale in October at Indianapolis Motor Speedway.

“I’m looking forward to heading back to COTA,” said Foley. “It’s an unexpected trip, as we were supposed to race at Watkins Glen, but it’s an exciting chance to build on our success there from earlier this year. Unfortunately, we’re missing the race on Saturday, but we’ll push hard for the best results possible to try and make up the points we’ll miss out on.”

Erin Vogel
Despite a rookie season that has been plagued with various issues, Erin Vogel has pressed on and improved with each session, racing the No. 30 McLaren. After finishing fifth and sixth in race one and two at Road America, Vogel was on her way to a strong finish when contact on the restart resulted in a DNF. With the strides made throughout the season, Vogel, with co-driver Michael Cooper will look to better their previous fifth place result at COTA.

“I’m looking forward to returning to COTA for the second time this year,” said Vogel. “It’s great that the series has been able to redirect for the events that weren’t possible this season, and that COTA is able to welcome us back again. We are confident that we have a much better handle on the chassis than we had at the season opener in March, and with the extra hours the team has been putting in on the car we hope to have the pace that has been eluding us for much of the season.”

Michael Cooper
Following a frustrating run at Road America, Michael Cooper joined Vogel at Indianapolis Motor Speedway for a two day test in preparation for the final two events of the race season. The McLaren factory driver has been vital to the team’s progression with the car this season, making strides to better the car’s performance.

“Heading back to Circuit of the America’s for the second time this year provides a unique opportunity to see what kind of progress we have made with the McLaren over the last six months,” said Cooper. “Flying Lizard Motorsports have been working their tails off on this McLaren and that’s really appreciated from my side and I’m sure Erin feels the same way. It would be nice to give everyone the reward they deserve with some good results, I’ll be giving it 100% to make that happen.”

The Format
The Pirelli GT4 America Sprint races held this weekend will consist of one driver completing three 50 minute races per weekend, with no pit stops are required. The driver will have a 15 minute qualifying session for race one, and their starting position for race two is determined by each competitor’s fastest lap in race one, and the fastest lap in race two will determine the starting position for race three. Michael Dinan will race the No. 210 Aston Martin Vantage GT4 in the Sprint championship.

The Pirelli GT4 America SprintX series will return to the normal race weekend format, with only two 60-minute races to complete at Circuit of the Americas. Two drivers will share a car in one race. Each of the two drivers will participate in a 15 minute qualifying session to determine their starting position for one of the two races. The first driver of the pairing will start race one, and the second driver will take over during a mid-race pit stop to complete the event. The order will swap for race two, with the second driver taking the opening stint, and the first driver finishing the race. In this series, Michael Dinan and Robby Foley will share the No. 21 Aston Martin Vantage GT4, and Erin Vogel and Michael Cooper will together race the No. 30 McLaren 570S GT4.

The Track
Built in 2012 as a grade 1 FIA specification permanent road course, Circuit of the Americas sits less than 13 miles from the heart of Austin. The 3.427 mile track hosts 20 turns and sweeping turns and 133 feet in elevation changes. With large, sweeping runoff areas, this track’s events are notorious for “track limit violations,” a penalty assessed for drivers who go off significantly off course and are able to continue. In the season opening event in March, the team started the year off with one win, three podiums, and five top five finishes in four races.

Tune-In
Live streams of all races will be held on GT4-America.com and the GT World YouTube Channel. Live Timing will be available here. All races will air on the dedicated SRO America SiriusXM radio show at Channel 383 or 984 (App). Tape delay broadcasts of the events will air on CBS Sports Network September 24 at 8:30PM ET (Sprint) and September 27 5:30PM ET (SprintX).