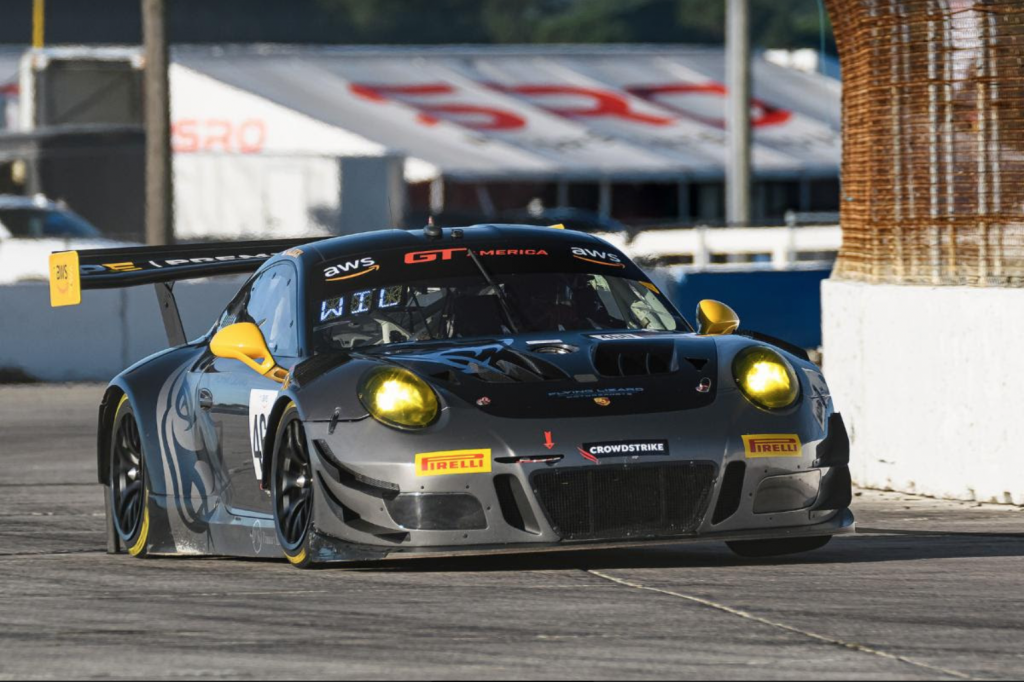 INDIANAPOLIS, Ind., (October 13, 2021) — Many race seasons have passed since sports car racing team Flying Lizard Motorsports has raced on the hallowed grounds of Indianapolis Motor Speedway (IMS). This weekend, the 10-time sports car racing champions will return to the Racing Capital of the World for the first time since 2014, racing the No. 460 Porsche 911 GT3 R with Andy Wilzoch, and the No. 101 TKO Motorsports Bentley Continental GT3 with Memo Gidley. IMS will host the season finale weekend, where competitors of the 2021 GT America powered by aws championship will compete in two final 40-minute races October 15-16.

“It’s great to be heading back to Indianapolis,” said Program Manager Darren Law. “The facility comes with such a unique presence and leaves you with a sense of awe. It’s been some time since we’ve raced here as a Flying Lizard effort, and I’m proud to be returning to the circuit as one of the team owners. We’ve built a strong customer racing program, as evidenced by the success Andy Wilzoch has had in his Porsche GT3R and Memo Gidley in the TKO Motorsports Bentley GT3. It’s going to be a great weekend and we’re looking forward to closing out the year with more trophies to add to our case.”

Though the team has only run a partial season with both efforts, Wilzoch and Gidley have already acquired an impressive 11 podiums and six wins. Wilzoch will once again be eager for the maximum amount of track time, after a mechanical issue and shipping delays on a part forced the Porsche 911 GT3 R to miss most of the pre-race sessions at Sebring International Raceway two weeks ago. Undeterred, Wilzoch was able to rebound from a last-place starting position on the grid to drive to back-to-back Masters class victories and two overall top-five finishes.

Memo Gidley is on a roll in the TKO Motorsports Bentley after his weekend sweep two weeks ago at Sebring International Raceway. Capturing both victories from pole position, he celebrated his third overall win in four races, quickly establishing the effort as a front runner in the GT America series. The IMS road course layout will be new to the veteran racer, who will be eager to get started with on track activities beginning Thursday.

After qualifying on Friday morning for race one, the field will begin race two that evening, beginning at 4:55 PM Eastern. The fastest lap of each competitor will set their starting position for race two, beginning on Saturday, October 16 at 12:05 PM. Both races will air live on YouTube.com/GTWorld.

DRIVER QUOTES
Andy Wilzoch | No. 460 Porsche 911 GT3 R
It’s hard to believe the end of the season is already here, but there’s no better place to close it out than at Indianapolis Motor Speedway. It’s probably every driver’s dream to one day race at this circuit, and I’m looking forward to getting the Porsche on track to get a feel for the circuit. I’m looking forward to closing out the year with a strong finish.

Memo Gidley | No. 101 TKO Motorsports Bentley Continental GT3
I am really looking forward to driving the #101 TKO Motorsports Bentley Continental GT3 in the GT World Challenge America race at IMS for a bunch of reasons! First, I have never driven the Indianapolis Motor Speedway road course. The track layout looks fun, and I can’t wait to get a feel for it. Second, after a great Sebring race win, it would be awesome to do it all again! And lastly, in my never-ending search for IndyCar rides when I was first trying to climb the open-wheel ladder, I lived in Indy in a friend’s house for a few years so that I could more easily drive to all the IndyCar races, waiting for an opportunity. Local Indiana people were very supportive of me going after racing Indy cars because it seemed to most that drivers without big family backing, not very possible. I meet and still have so many friends in Indy and I am excited for them to come out and see me back on the track in Indy driving the #101 TKO Motorsports Bentley Continental GT3 during the SRO weekend.