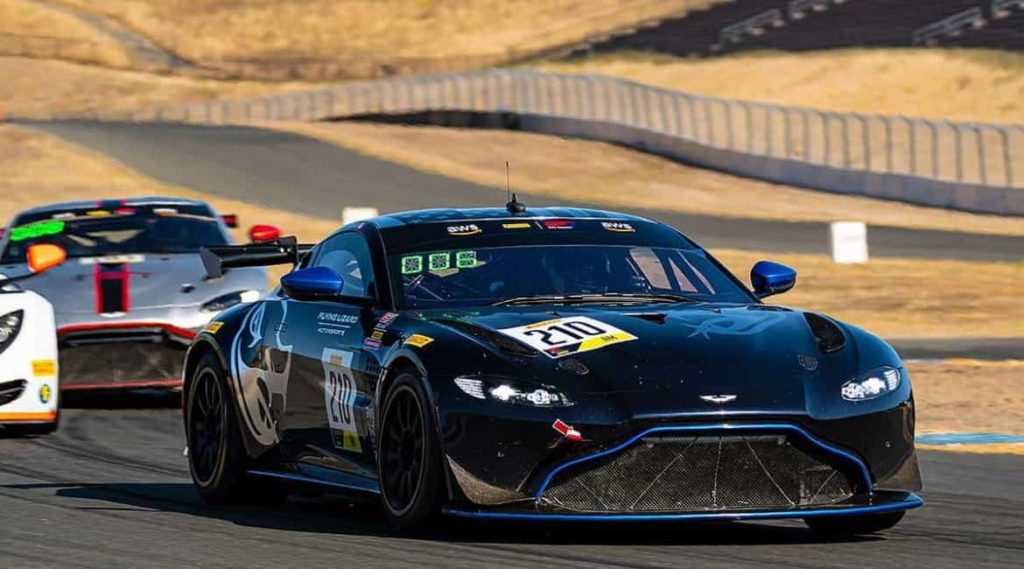 ELKHART LAKE, Wis., (August 26, 2020) – While the 2020 calendar year seems to stretch on for an eternity, the current GT4 America season has flown by for Flying Lizard Motorsports. The GT4 series has reached its halfway point in the season, beginning the second half of the championship this weekend at Road America in Elkhart Lake, Wisconsin. Holding the first event with fans since March. Flying Lizard Motorsports will race its three full season entries: the No. 210 Aston Martin in Sprint, and the No. 21 Aston Martin and No. 30 McLaren in SprintX.

“Road America is one of the premier tracks in North America and we always enjoy racing there,” said Program Manager Darren Law. “However, it is very different than our previous track, Sonoma Raceway. Both tracks are technical but Road America is so much longer, faster and has corners that take a lot of commitment if you want to be fast. Because of the speed and commitment, the setup is critical. It is a track that should suit both of our brands of cars. Our drivers are racing for wins and the team is working well. We are in the fight for the championship and we hope to carry our good momentum from the last event into this weekend. I am looking forward to finally seeing some fans again at the races!”

Earning five podiums in six races, Michael Dinan enters Road America with strong momentum from the previous rounds at Sonoma Raceway. Dinan currently leads the Sprint championship, with a forty-point lead over Paul Terry. Driving in both the Sprint and SprintX championships, Dinan has celebrated seven wins so far in 2020, his sophomore season in the GT4 America championship. Dinan will race the No. 210 Aston Martin GT4 Vantage in the Sprint races, and the No. 21 with Robby Foley in SprintX.

“I can’t wait to be back at Road America,” said Dinan. “It’s one of my favorite tracks and I’ve spent more time here than any other track we race at. We had our best weekend yet at Sonoma and hope to keep the momentum going. The whole team has been doing a fantastic job all season, and we hope to score good points for the championship this weekend.”

Dinan’s co-driver Robby Foley is riding his own momentum this weekend, fresh off his GTD win in the IMSA WeatherTech SportsCar Championship at VIRginia International Raceway. The weekend before at Sonoma Raceway, Foley and Dinan earned their first overall SprintX win as a pair, as well as two more podiums to sweep the weekend. Together, Dinan and Foley sit third in the SprintX point standings, 20 points away from the championship leaders. Foley will race alongside Michael Dinan in the SprintX Championship in the No. 21 Aston Martin Vantage GT4.

“I’m excited to head to one of my favorite tracks with everyone at Flying Lizard,” said Foley. “We had a successful weekend out in Sonoma, so hopefully we can carry that momentum.”

While her season has been a character building one, Erin Vogel has made the most of her rookie season in GT4 America. Bad luck has plagued the No. 30 McLaren 570S GT4 most of the season, but Vogel has pressed on, becoming more competitive with each event. The McLaren driver has previous experience at Road America, finishing in the top five at the circuit in 2019 with the Porsche Trophy West USA series.

“I’m excited to be back at Road America this season,” said Vogel. “It’s a great track with a lot of interesting corners and a lot of beautiful scenery. It’s a fun track to drive, but it’s even more fun to race here. I’m glad that fans will be able to come out and watch us from the stands and lounge under the trees.

Vogel’s co-driver Michael Cooper fared well at Road America in 2019, racing a McLaren 570S GT4 and winning both Sprint races by over 1.5 seconds each times. While the pair have had a challenging season so far, they’ve so far earned two top five finishes, and have showed consistently competitive speeds in each race.

“Road America is great event that I look forward to every year,” said Cooper. “The track has a great flow to it, the town of Elkhart Lake is awesome to visit and we’ll get some fans at this event. It’s also a track that suits the McLaren fairly well, each car has a few of those on the calendar and this one is in our favor. Well do our best to put it all together and execute a solid weekend.”

The Format
In an effort to make up for the cancellation of races and rearranging of the schedule due to COVID-19, the GT4 America Sprint and SprintX series will each run three races this weekend. The Pirelli GT4 America Sprint championship consists of one driver completing three 50 minute races per weekend, with no pit stops are required. The driver will have a 15 minute qualifying session for race one, and their starting position for race three is determined by each competitor’s fastest lap in race two. Michael Dinan will race the No. 210 Aston Martin Vantage GT4 in the Sprint championship.

The Pirelli GT4 America SprintX championship expands to consist of two drivers together completing three sixty minute races, with one pit stop required. Each driver will participate in a 15 minute qualifying session to determine their starting position for one of the two races. The first driver of the pairing will start race one, and the second driver will take over during a mid-race pit stop to complete the event. The order will swap for race two, with the second driver taking the opening stint, and the first driver finishing the race. The starting position for race three will be determined by the second fastest qualifying lap by driver one.

The Track
A longtime fan-favorite track in North America, Road America is the perfect track to welcome fans back to the GT4 America paddock. The Wisconsin circuit hosts all kinds of racing from karts to stock car racing. With 640 acres of rolling hills and dense woods, the circuit is the perfect spectating track for fans, with countless vantage points to watch from.

In fourteen visits to the Wisconsin circuit since 2004, Flying Lizard has earned one win, ten podiums, and 19 top-five finishes. For the first time since March, the SRO event will be open to fans this weekend, however access to the pits and paddock will be restricted.

Tune-In
Live streams of all races will be held on GT4-America.com and the GT World YouTube Channel. Fans can listen to the race live on SiriusXM Radio on channel 383, or on the app at 984. Live Timing will be available here. Tape delay broadcasts of the events will air on CBS Sports Network September 10th at 9:00PM Eastern (Sprint) and 10:00PM (SprintX).