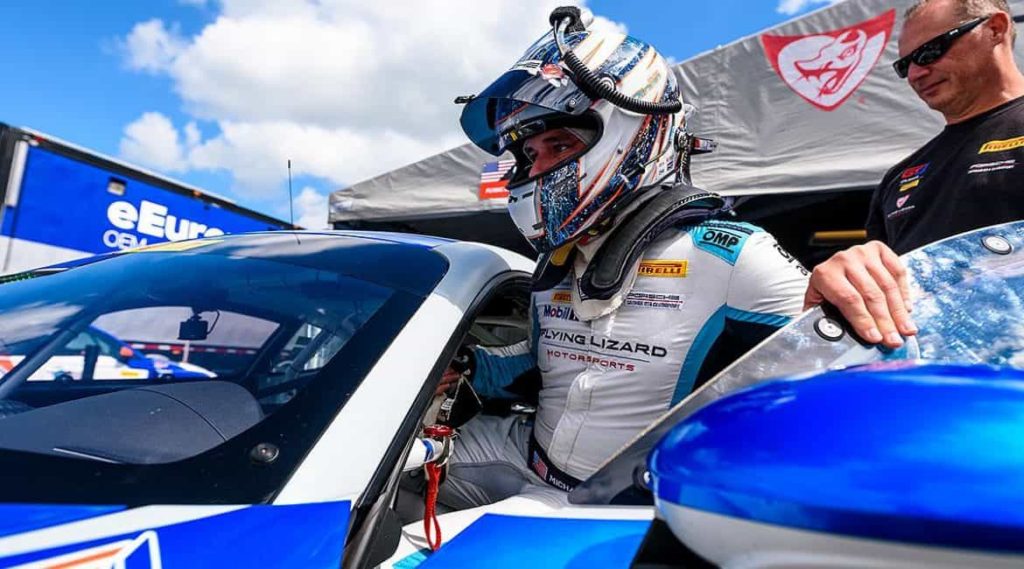 ELKHART LAKE, Wis., (September 19, 2019) – The penultimate race weekend of the 2019 GT4 America season has arrived and Flying Lizard Motorsports will join 38 other GT4 competitors for an action packed race weekend at Road America in Elkhart Lake, Wisconsin. Entering the pair of Flying Lizard Motorsports No. 21 and No. 210 Porsche 917 Cayman GT4 Clubsport in the Sprint and SprintX races, the team will compete in four races between Saturday and Sunday.

“It’s going to be another busy weekend for us, but at one of the greatest tracks on the calendar,” said Program Manager Darren Law. “Road America is such a fun course for drivers, and the town of Elkhart Lake is one of our favorite racing towns to visit. Our drivers Michael Dinan and Robby Foley have the momentum of a podium finish at Watkins Glen, and we’re hoping to carry that into Road America this weekend.”

With three podiums earned so far this season, Dinan and Foley have proven to be a strong duo, sitting fourth in the SprintX GT4 America championship standings with four races left.

The Format
The GT4 America Sprint championship consists of two 50 minute races in one weekend, with Michael Dinan in command of the car for the entire race. No pit stops are required, but may be taken for emergency situations. There will be one 15 minute qualifying session for race one Saturday morning. Race two’s starting position on Sunday morning will be determined by the fastest lap from race one.

For the two SprintX races, Dinan and Foley will each drive the No. 21 Porsche 718 Cayman GT4 Clubsport. The pair will share the two practice sessions before each will get a chance to qualify on Saturday morning for one of the weekend’s two races. The driver will start the race he qualified for, then pit during the mandatory 10 minute window during the race to let the second driver finish the event. The races will run for 60 minutes, with one pit stop required. Teams will not be allowed to change tires or add fuel to the car.

Driver Quotes
Michael Dinan: “This will be my first time racing at Road America and I’m excited for another weekend of four races with Robby and Flying Lizard. I’ve done some testing here in the past so I know the layout, but still have plenty to learn and am looking forward to the challenge.”

Robby Foley: “I’m excited to be heading back to Road America with Michael and Flying Lizard Motorsports. It’s a Sprint and SprintX weekend so it’ll definitely be hectic, but I’m looking forward to sharing the car again with Michael and helping him in the sprint races.”

The Track
Always a fan favorite event on the race calendar, Road America first opened for business in 1955, and currently hosts a variety of racing, including karts, IndyCar, NASCAR, and various historic, sports cars, and open wheel series. The facility sits on 640 acres of rolling hills and woods in Elkhart Lake, Wisconsin, roughly 60 miles north of Milwaukee. Flying Lizard Motorsports earned its one and only Road America victory in 2013 with Spencer Pumpelly and Nelson Canache, but has celebrated eleven podiums and 17 top five finishes at the Elkhart Lake track.

The Engineering: From Team Engineer Jim Bell
Road America is a very difficult track from an endurance standpoint, because if something happens, you’re a long way from the pits and have to limp the car back or park it. Dependability of car is serious because it’s a very fast place, and very long place. It’s technical for the driver, and very technical for the engineer.

You’re going to go as fast as the car will go into turn one. We probably won’t go faster anywhere else, any track we go to. There’s a heavy emphasis on braking into turn one because of the long, fast straightaway. It’s a technical run through the brake zone on the lefthander, and into turn five, which is one of the few places at this track you can pass, and one of the more desirable places to get by.

We’ll make technical adjustments necessary to get through carousel, which is an off camber, constant decreasing radius, long right hander. After that, you have the kink, which is another gutsy technical scenario, because you’re going so fast. Then you have Canada corner, which is followed by a long straight, and hard breaking, and getting up the hill.

For this course, you have to set up for the high speed and mid speed parts of the track. The kink has to have mid speed and agility, and enough grip to be able to get through there. This is very important to the lap time.
Last but not least, it rains at Road America, and it rains a lot, and will especially this weekend. It dries immediately here, which is amazing. It’s one of the fastest drying tracks we have now. Even in the rain, there’s grip on the track, but it’s a different rain line through the twists and technical parts. You have to always have a rain set up in your back pocket because the weather can come up quickly.

Tune-In
Race one of the Sprint series will take place Saturday, September 21 at 1:10PM U.S. Central, followed by race two on Sunday at 10:00AM. Races one and two of the SprintX championship will begin Saturday, September 21 at 5:00PM, and Sunday 12:10PM respectively. Throughout the weekend, the team will post live updates of all practice, qualifying, and race sessions via twitter. All races will air live on the GT World YouTube Channel as well as www.gt4-america.com. For full event information, visit www.gt4-america.com.