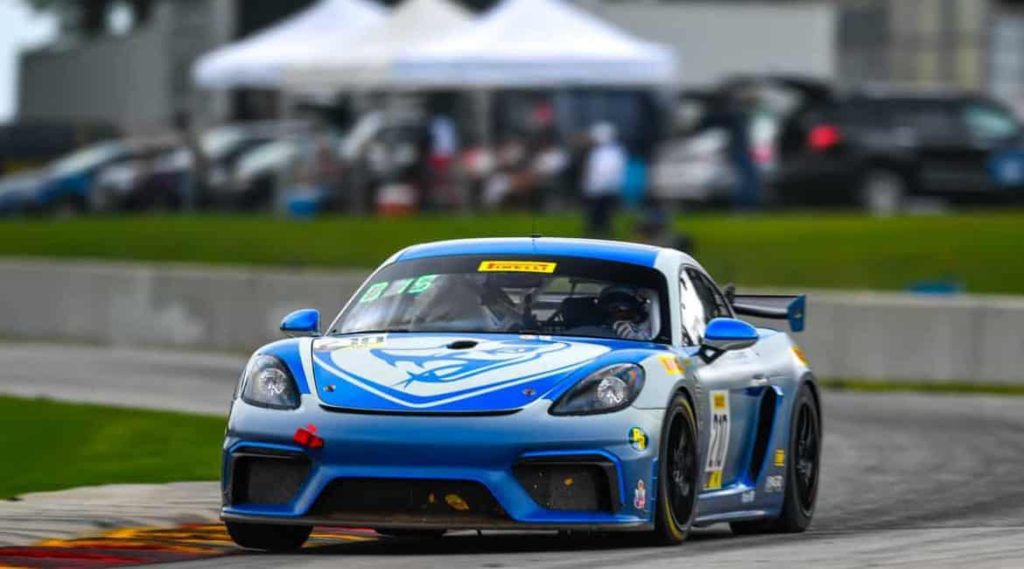 LAS VEGAS, N.V., (October 16, 2019) – The 2019 GT4 America season will come to a close this weekend at Las Vegas Motor Speedway, hosting another double header weekend of both the Sprint and SprintX championships, sanctioned by SRO America. This will mark the first time Flying Lizard Motorsports has competed at the circuit in their 16 years of professional competition, this weekend entering the No. 210 and No. 21 Porsche 718 Cayman GT4 Clubsport with Michael Dinan and Roby Foley.

“Our guys have done a great job all year and we’re looking forward to ending this season on a high note,” said Program Manager Darren Law. “This was our first season running in both the Sprint and SprintX Championships. Twenty-nine races in ten weekends is a lot to handle, and our whole team excelled, especially Michael, in what was his rookie season.”

Following the completion of the race weekend, the series participants will celebrate the 30th anniversary of SRO America, formally known as the Pirelli World Challenge. Hosted at the legendary Bellaigo Hotel and Casino, the end of the year banquet will be a black tie event, celebrating the momentous occasion in style following an action packed race weekend.

The Format
The GT4 America Sprint championship consists of two 50 minute races in one weekend, with Michael Dinan in command of the No. 210 Porsche for the entire race, which will take the green flag on Saturday, October 19 at 2:40PM ET. Dinan’s starting position for race two, will be determined by his fastest lap from race one, based on where that lap ranks amongst those of his competitors. Sprint race two will begin Sunday, October 20 at 9:00AM.

For the two SprintX races, Dinan and Foley will each drive the No. 21 Porsche 718 Cayman GT4 Clubsport. To date, the duo have celebrated three podium finishes, and the pair will share the two practice sessions before both will get a chance to qualify for one of the weekend’s two races. The driver will start the race he qualified for, then pit during the mandatory 10 minute window during the race to let the second driver finish the event. The races will run for 60 minutes, with one pit stop required. Teams will not be allowed to change tires or add fuel to the car. SprintX race one will begin on Saturday, October 19 at 5:00PM, and the weekend’s festivities will conclude with race two on Sunday, October 20 at 11:10AM.

Driver Quotes
Michael Dinan: “I’m looking forward to heading out to Las Vegas for the first time. It’s a new track for everyone, so that levels the playing field. We were competitive last time out at Road America, so let’s try to keep our strong form going and close out the season on a high.”

Robby Foley: “There are mixed emotions as we head into the final race of the season. On one hand, I’m excited to get back racing with the team, but also disappointed that the season is already over. I myself am coming off a win at Petit Le Mans, so hopefully we can keep it going and get our Flying Lizard Porsche back on the podium.”

The Track
This weekend will mark the team’s first time on the circuit, the layout for which will be officially approved by the FIA sanctioning body in the days before the first practice begins. This weekend’s race weekend is the first sports car race held at the speedway since 2000. The proposed track layout will avoid the speedway’s banking, running on the low apron of the oval and also utilize the current infield road course to create a 12 turn circuit.

Tune-In
The first round of races for the Sprint and SprintX begin Saturday October 19 at 2:40PM and 5:00PM, respectively. The second round of races will take place Sunday, October 20 at 9:00AM and 11:10AM. Throughout the weekend, the team will post live updates of all practice, qualifying, and race sessions via twitter. Races one and two of the Sprint championship will stream live on the GT World YouTube Channel as well as www.gt4-america.com. For full event information, visit www.gt4-america.com