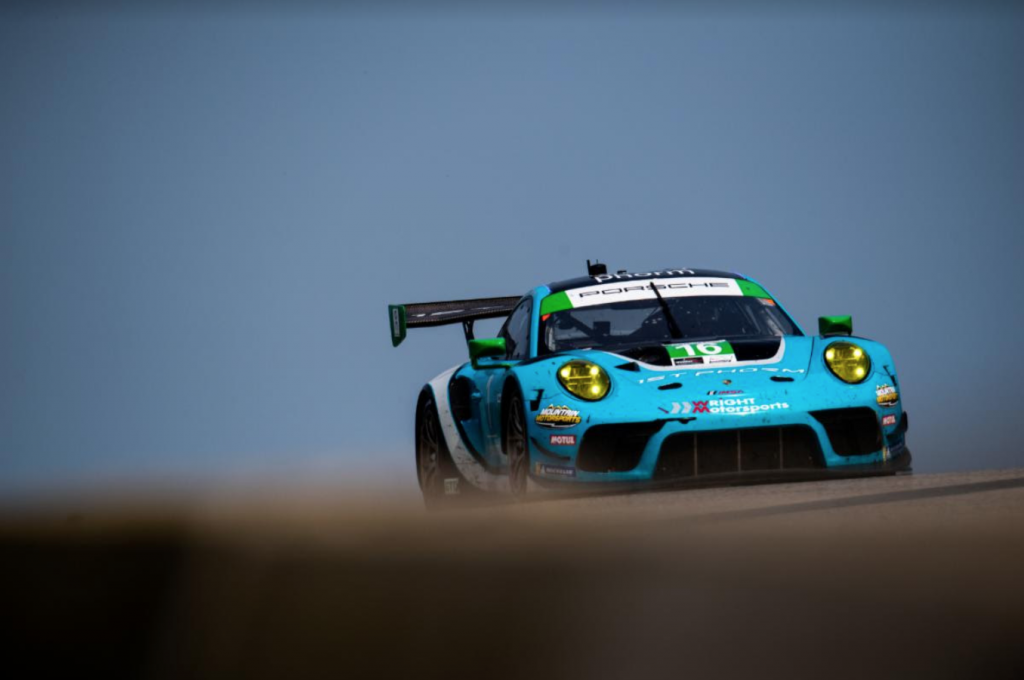 “The pressure is on for this final stretch of the season,” said Team Owner John Wright. “This is our second event this year where we will be racing in two different locations. I know we’ve got the best people to make all three efforts have successful runs. Our biggest strength has always been consistency on and off track, and we’re looking to score maximum points this weekend.”

IMSA WeatherTech SportsCar Championship | WeatherTech Raceway Laguna Seca
With four races remaining in the 2021 season, Wright Motorsports holds tight to fifth-place in the GTD team championship standings, with Patrick Long standing fifth in the driver championship battle. After a third-place finish at Road America last month, the pairing of Long and Trent Hindman have momentum on their side in the No. 16 Porsche 911 GT3 R. With three sprint races together as co-drivers, the pair have found their stride, eager to add to the three, top-five finishes the GTD team has accumulated so far this season.

Located near Monterey, California, the 2.238-mile road course is a home track to Long, a California native. The track will host 26 entries in four of the five IMSA WeatherTech classes this weekend, with four on-track sessions before Sunday’s race. The Hyundai Monterey SportsCar Championship will begin at 1:10 PM Pacific on Sunday, September 12, running for two hours and 40 minutes. The race will air live on NBCSN and NBC Sports Gold’s TRACKPASS streaming service beginning at 1:00 PM Pacific.

Patrick Long
No. 16 Wright Motorsports Porsche 911 GT3 R
It’s great to be back to the west coast. Minimal track time leading up to the event remains a theme in the series, so we will be looking to use our practice time wisely and start strong. The Corkscrew is one of those iconic corners in motorsport where you never perfect it, nor do you grow tired of it. It’s an awesome track altogether! Let’s get this Wright Porsche 911 on the top of the box for 1st Phorm and all of our great partners.

Trent Hindman
No. 16 Wright Motorsports Porsche 911 GT3 R
A good result at Road America finally provided some validation for our efforts over the last few rounds, though all focus turned towards Laguna Seca the second we crossed the line three weeks ago. A tight, technical racetrack with high tire degradation seems suitable for a Wright Motorsports-prepared 911 GT3 R. I’m looking forward to improving upon our last race result with Pat and the 1st Phorm team after a long break in the action.

Michelin Pilot Challenge | WeatherTech Raceway Laguna Seca
Only three races are left for the GT4 effort in Michelin Pilot Challenge, where the team is currently holding third place in the GS team point standings. With four podiums in seven races, the team has made a strong effort to join the championship battle after missing the first race of the 2021 season. Three weeks ago at Road America, rough weather conditions made for a slick track and caused a series of events leading the No. 16 Porsche 718 Cayman GT4 Clubsport to go off course, unable to finish the race. Undeterred, Ryan Hardwick and Jan Heylen will keep their eyes focused on the championship title this weekend, enjoying the flowing turns and steep elevation changes that WeatherTech Raceway Laguna Seca has to offer.

Ryan Hardwick
No. 16 Porsche 718 Cayman GT4 Clubsport
I love racing at Laguna Seca! It’s one of the most fun and challenging tracks to drive on with the lack of traction from the surface. I’m expecting us to rebound well here after a bad race for our GT4 program at Road America. I also think our GTD car will be very competitive around this circuit as well. I’m expecting good things from this race weekend.

Jan Heylen
No. 16 Porsche 718 Cayman GT4 Clubsport
I’m looking forward to traveling out west to Laguna Seca. It’s a super fun race track with high tire degradation which always makes the race a real battle, with typically a lot of action towards the end of the stint. We’ve got a little catching up to do in the points, but we have the best team and a fast Porsche to get that done.

Porsche Carrera Cup North America Presented by the Cayman Islands | Indianapolis Motor Speedway
The trio of Wright Motorsports Porsches had a frustrating start to the inaugural season of the one-make championship in March, but have since gained significant ground. The Ohio-based program has been improving on-track performance and getting the most out of the new Porsche 911 GT3 Cup car, as well as the three drivers; Maxwell Root, Hutton McKenna, and John Goetz since the season-opener. With nine podiums in four events, the trio hit their stride at the previous round at Road America, with each driver producing some of their best performances of the season.

Twenty-eight entries are slated to compete this weekend at Indianapolis Motor Speedway in the Porsche SportsCar Together Fest: three, 45-minute races held on Saturday, September 11 at 4:15 PM Eastern and Sunday, September 12 at 8:45 AM and 3:30 PM Eastern. All three races can be viewed live at PorscheCarrereaCup.us and on imsa.tv.