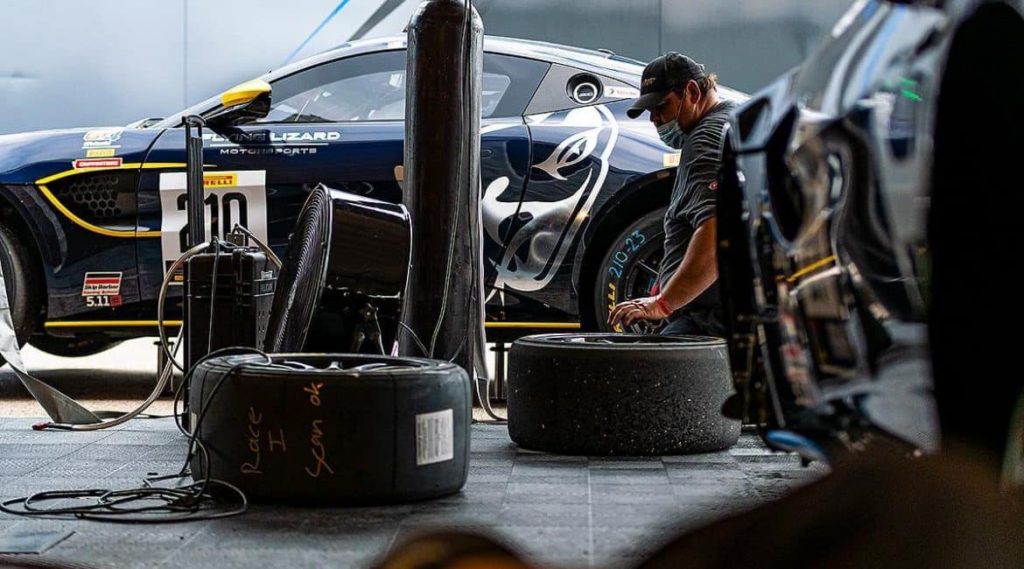 INDIANAPOLIS, Ind., (September 29, 2020) – The 2020 GT4 America championship will come to a close this weekend at Indianapolis Motor Speedway where Flying Lizard Motorsports will put up a final fight for three championship titles. Michael Dinan, driver of the No. 210 Aston Martin Vantage GT4, secured the Sprint Am driver championship earlier this month at the Circuit of the Americas, leaving the Sprint Am team championship and SprintX Pro/Am driver and team championships still up for grabs. All three Flying Lizard machines will take place in the Sprint and SprintX double headers, with the No. 21 Aston Martin of Michael Dinan and Robby Foley and the No. 30 McLaren 570S GT4 of Erin Vogel and Michael Cooper racing in SprintX, joined by Dinan’s No. 210 Aston in Sprint.

“It was a proud moment when we clinched our seventh championship as a team, but we’re not done yet,” said Program Manager Darren Law. “It’s been great to see each of our drivers grow and develop as the season has progressed, and we’re looking forward to an exciting final run for those championship titles.”

Despite an absence for one of the three races at Circuit of the Americas, Michael Dinan was able to secure the Sprint Am 2020 driver championship after winning the first and third rounds of the triple header weekend, netting 10 wins to date. The Sprint Am team championship remains up for grabs with Flying Lizard Motorsports leading over Reardon Racing by 39 points. With a maximum of 50 points available, the battle for top honors remains heated.

With ten top five finishes and five class wins, Michael Dinan and Robby Foley currently sit second in the SprintX championship, just three points away from NOLASPORT’s Jason Hart and Matt Travis. If the pair can take the win in round one, they’ll assume the points lead, but with the battle this close, the championship will be determined in the final round.

“I’m looking forward to my first laps around historic IMS,” said Foley. “Michael wrapped up his Sprint championship at COTA, now we’re going be pushing for the SprintX title!”

Following a two-day test at Indianapolis Motor Speedway in early September with the No. 30 McLaren 570S GT4, Erin Vogel and co-driver Michael Cooper stand as one of just a couple pairings to have experience on the famed road course. While technical gremlins prevented the duo from utilizing the entire two-day test, they were still able to get familiar with the course and get valuable information for the team’s engineers heading into this weekend.

“I’m so grateful to Flying Lizard that we are going into this final weekend of the series at Indianapolis with confidence,” said Vogel. “We were fortunate to be able to test there earlier in September, and it was a great opportunity to get a first look at the track and the facility, which is truly world-class. The ambiance is incredible, and I’m very excited that we’ll have loyal fans there to welcome us into this home stretch of 2020.”

While the pair of Dinan and Foley have been frontrunners in their respective championships in their sophomore season, Erin Vogel, co-driver Michael Cooper, and the No. 30 McLaren in their rookie season together have also contributed to Flying Lizard’s SprintX team championship battle for the title. With three top-five finishes amid a challenging first season, the pair have added valuable points to the 17 point lead Flying Lizard holds over NOLASPORT in the SprintX team standings.

“SRO has done a great job the last few years picking new exciting venues for the season finales,” said Cooper. “I’m looking forward at racing at Indianapolis. We were able to get some laps around the course a few weeks ago which should give us a head start on a lot of the other GT4 cars in SprintX.”

The Pirelli GT4 America SprintX championship expands to consist of two drivers together completing two sixty minute races, with one pit stop required during a mandatory 10-minute window. Each driver will participate in a 15 minute qualifying session to determine their starting position for one of the two races. The first driver of the pairing will start race one, and the second driver will take over during a mid-race pit stop to complete the event. The order will swap for race two, with the second driver taking the opening stint, and the first driver finishing the race.

The Track
Located in Speedway, Indiana, Indianapolis Motor Speedway is a world-class facility dubbed the “Racing Capital of the World.” Home to the Indianapolis 500, the iconic circuit has just undergone vast renovations under the new ownership of Roger Penske and will use this weekend’s events to host race 10,000 fans for the first time this season. All series competing on the track this weekend will run the 13-turn, 2.439-mile road course which is built by combining parts of the famed oval and infield sections of track. Flying Lizard last competed at Indianapolis Motor Speedway in 2014 with the then IMSA TUDOR United SportsCar Championship.

Tune-In
Live streams of qualifying and both races will be held on GT4-America.com and the GT World Challenge YouTube Channel. Fans can listen to the race live on SiriusXM Radio on channel 383, or on the app at 984. Live Timing will be available here. Tape delay broadcasts of the Sprint events will air on CBS Sports Network October 15th at 9:00PM ET.