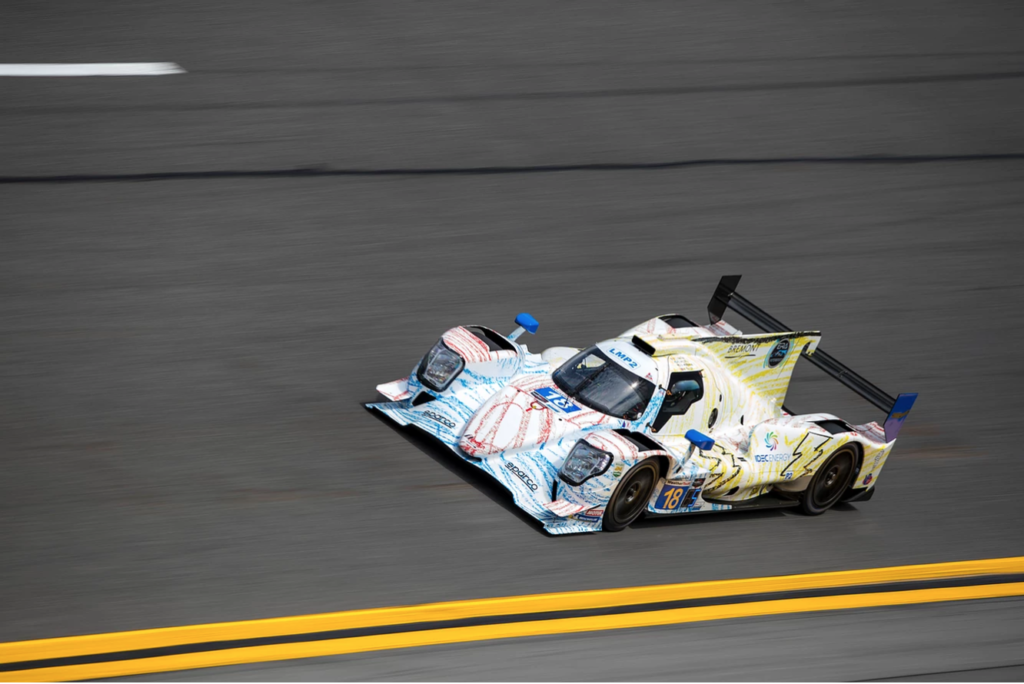 DAYTONA, Fla., (January 27, 2021) – The No. 18 Era Motorsports Oreca LMP2 car debuted its special livery for the Rolex 24 At Daytona last week, designed by a six-year-old (and three quarters) race fan from Ontario, Canada. Following week of testing, the IMSA WeatherTech SportsCar Championship season officially begins this week with the Rolex 24 at Daytona, the first and longest event on the 2021 calendar. Together with drivers Kyle Tilley, Dwight Merriman, Ryan Dalziel, and Paul-Loup Chatin, the team ran a successful test, ready for their sophomore run in the endurance event.

The Roar Before the 24, the first official test session of the season, concluded on Sunday with a 100-minute race to set the grid for this week’s Rolex 24. Dwight Merriman and Paul-Loup Chatin competed in the event, racing in varying conditions to earn a seventh place starting position for Saturday, January 30. The team is on pace to have a positive run, with Dwight Merriman already bettering last year’s laps by two seconds, and the other three drivers running within two tenths of a second.

Five classes will compete in this year’s race: DPi, LMP2, LMP3, GTLM, and GTD. Era’s LMP2 class has a total of ten entries with forty different drivers slated to compete. The multi-class racing combined with varying light, temperatures, weather, and cars adds to the challenge of the event, making a win or podium finish even more gratifying.

Fans in the United States scan watch the race live in its entirety on NBC Sports Gold’s TRACKPASS for $2.99, or watch the first hour on NBC. Fans outside the United States can visit imsa.com/internationalcoverage to find their correct broadcast information. IMSA Radio will continue to offer their comprehensive coverage of every session, and any additional information can be found on imsa.com.

Kyle Tilley
I couldn’t be happier with the team and the car heading into this week’s Rolex 24 At Daytona! Dwight is two seconds a lap faster than last year, and Paul-Loup, Ryan, and myself are all within two tenths of each other, so it bodes well for the race.

LMP2 is stacked this year, which is great for the class. IMSA really got it right by allowing the P2 cars to have a bit more freedom with the aero settings. It has made the car come alive! Bring it on!

Dwight Merriman
I feel like we all did a great job utilizing every session of the Roar Before the 24. We’re all running consistent lap times in what will be a very competitive field. The qualifying race gave us a brief glimpse of how intense the LMP2 class will be for the race, and we’re ready to fight for it. The entire team did a great job making all the preparations, and we’re ready to go.

Ryan Dalziel
We had a great Roar weekend, so I really believe we are in good shape for the 24 hour race. Our speed seems really good, but more importantly, the team is working very well together. I am confident we will have a great race and I look forward to getting to the end, preferably standing on the podium with my teammates.

Paul-Loup Chatin
I am really very happy with the week we spent for the roar. The whole team did a very good job to put us in the best position. Dwight, Kyle, and Ryan are exemplary teammates, we have all worked in the same direction to make the car the most efficient and comfortable to find the best possible set up for the 24 Hours At Daytona.

We are now in the last straight line before the race and it will be important for us to focus on the last small adjustments to make sure that we are in the best conditions for the start on Saturday. It will be a long and difficult race, but together we have the potential to achieve a very good result. Obviously, we will have to run a race without errors and have some success, but we will do our best to allow Era Motorsport to achieve the best possible result.