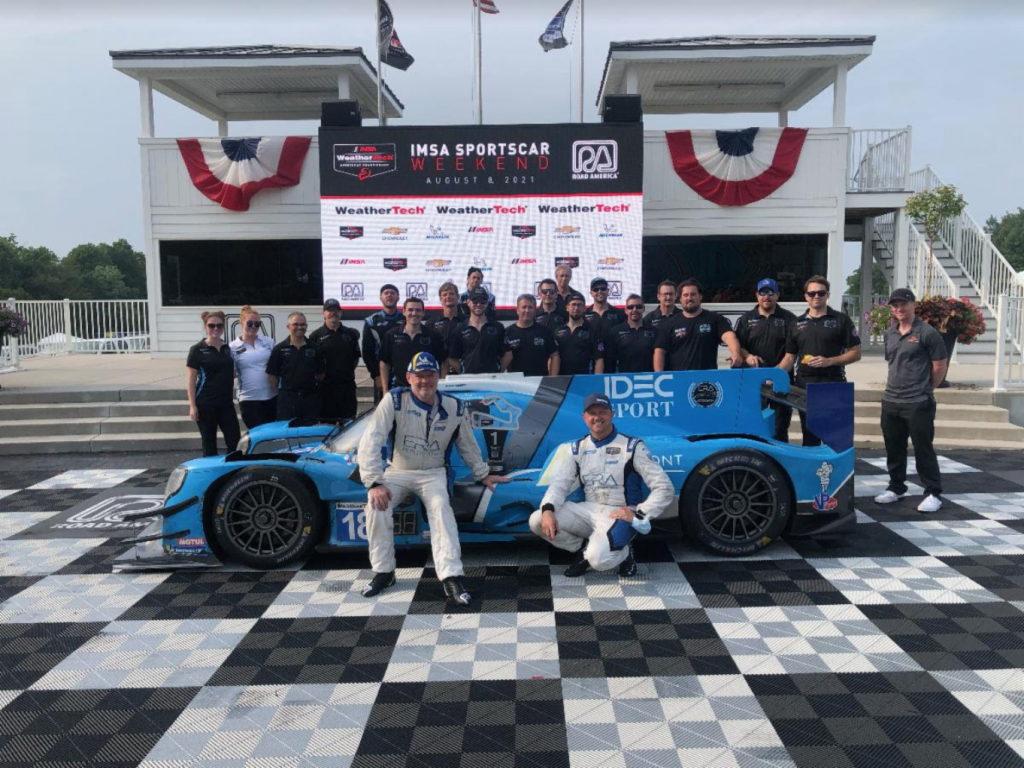 ELKHART LAKE, Wis., (August 9, 2021) – Six months since their victory at the Rolex 24 victory at Daytona, Era Motorsport has returned to victory circle with top honors this weekend at Road America, winning the IMSA SportsCar Weekend in the LMP2 class. The team, originally slated to only run the 2021 North American Endurance Cup decided last minute to join the Road America race weekend to prepare for this month’s 24 Hours of Le Mans, and after an impressive start, took the lead with a large margin over the LMP2 field.

While co-owner and co-driver Kyle Tilley raced in the NASCAR Xfinity Series and NASCAR Cup Series at Watkins Glen International, Dwight Merriman was joined by teammate Ryan Dalziel to step in for Tilley to race the two hour-forty minute race in Wisconsin. Dwight Merriman had one of his best race starts to date, expertly avoiding the early race calamity of other competitors to jump from fourth place to second in the opening lap. He maintained his position in the competitive field, holding off the No. 11 of Steven Thomas. He held the spot for the remainder of his stint, pitting for tires and a short fill of fuel just before the race went full-course caution.

Shortly after the restart, the field went back to yellow, and Merriman pitted the No. 18 Oreca again, but this time, for a full-service stop. Ryan Dalziel took over with fresh tires and a full tank of fuel and charged forward. The rest of the field pitted after, and unbeknownst to him, Dalziel took the lead. Thinking the class leaders were out of sight ahead of him, Dalziel pushed on, hoping to catch a glimpse of the position he needed to set his sights on. Once he asked the pit box how far behind the leader the No. 18 was, he was informed that he was indeed leading the No. 8 car of Gabriel Aubry by eight seconds. From there, Dalziel never looked back. He pitted for two more stops for fuel and tires, taking the win with a five-second gap over the rest of the class.

The win marks Era’s second of the 2021 IMSA WeatherTech SportsCar Championship season and third visit to an IMSA podium. With four races complete stateside, the team will now prepare to go back overseas to prepare for the 24 Hours of Le Mans. The team will run with IDEC Sport, the same team they already partner with in the European Le Mans Series. Following the traditional week of preparation and testing, the 24 Hours of Le Mans will take place Saturday, August 21 and Sunday, August 22. As it currently stands, the team has one final stateside race this season, Petit Le Mans November 13, with Kyle Tilley, Dwight Merriman, and Ryan Dalziel.

Dwight Merriman
I’m really happy with today. At Watkins Glen, we had a couple of mechanical issues that were out of our control, so it’s really nice to come back and win here. There are some really strong drivers in really great cars here, which makes this win even more special. The crew did a great job, the car set up was fantastic, and the engineering was on point. It’s really been a team effort. Everyone working together is why we won.

Ryan Dalziel
Mega day. The goal was obviously to come here and win, but ultimately it was to come here and work on the issues we’ve had for the last couple of races. Now we’re going into Le Mans with a lot of confidence. It’s hard to beat a win. This was the best car we’ve had all year. In a way, it’s a shame because it shows what we had at Watkins Glen before our electrical gremlins, and it backs up what we’ve done at Daytona and Sebring. I’m looking forward to the next couple of weeks ahead in France.