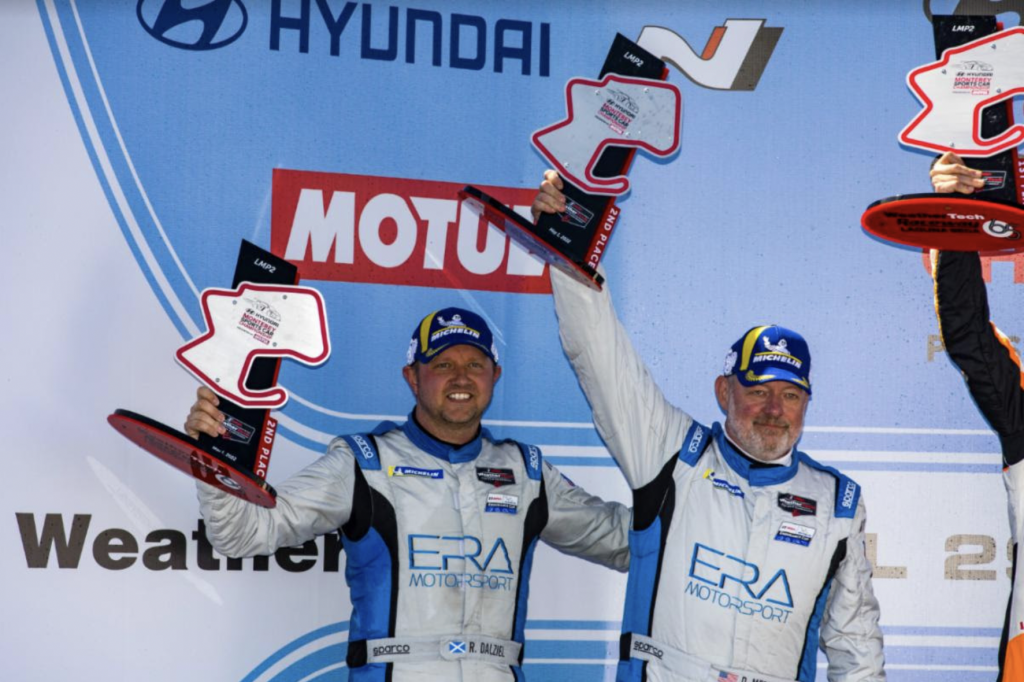 MONTEREY, Calif., (May 2, 2022) – Era Motorsport completed the first sprint race of the IMSA WeatherTech SportsCar Championship’s LMP2 class this weekend at WeatherTech Raceway Laguna Seca. The Indianapolis-based squad drove a masterful race to finish in second place in the No. 18 Oreca, taking the championship points lead with drivers Dwight Merriman and Ryan Dalziel.

The team arrived at WeatherTech Raceway Laguna Seca with a strong package, placing third and fourth in the two practice sessions. The No. 18 Oreca LMP2 prototype qualified in sixth place, ready to fight to the front in the short two-hour, 40-minute race on Sunday.

Dwight Merriman started from sixth and played his opening stint smart and smooth. While other cars careered off course or into their competitors, Merriman kept the Oreca prototype intact, narrowly avoiding multiple bouts of contact. He took the car’s first pit stop in fifth place, and the team quickly got the No. 18 Oreca serviced and back on track before a full-course caution temporarily paused the race. He rejoined, racing in sixth under clear, sunny skies, and as the race continued on, Merriman’s on-track performance came alive.

His clean and consistent laps allowed him to gain ground on the competition, methodically working his way through slower, lapped traffic while creeping closer to the other LMP2 cars. He made his climb to third place look easy, running behind the No. 52 of Patrick Kelly, who ran 22.3 seconds ahead. As the race clock ticked on, the pair found themselves running in first and second.

Co-driver Ryan Dalziel took over during the mandatory driver change pit stop, with a fresh set of tires, and the Oreca full of fuel. With one hour, 40-minutes remaining, his performance echoed that of Merriman’s, driving a clean stint to stay out of trouble and be there to fight in the end. In the final thirty minutes, he had worked his way up to second place, racing behind the No. 8 of Louis Deletraz, who had created a sizable lead.

After impressive drives by Merriman and Dalziel, and the support of a speedy crew in pit lane, the No. 18 Oreca LMP2 prototype finished second in class, earning Era Motorsport a second podium in three races. The pair and the team now lead the LMP2 driver and team points with four races remaining.

The LMP2 class will next race at Mid-Ohio SportsCar Course, racing alongside the DPi, LMP3, and GTD classes in another two-hour, 40-minute sprint race in the IMSA WeatherTech SportsCar Championship. The Lexus Grand Prix of Mid-Ohio will take place on Sunday, May 15 at 2:10 PM ET, live on the USA Network and streaming on Peacock.

DRIVER QUOTES
Dwight Merriman
It was a good day. Everybody did their job. The crew did a great job which made the result possible. I was happy to pick my pace up from yesterday. I haven’t been here a ton in this car so I’m still learning and it’s coming together a little bit. Good result.

Ryan Dalziel
Today was a really good result. Coming into the event, we had an opportunity to leave here with driver point leads, and we accomplished that. It was a tough race, with only one yellow flag. The car was really good, the crew nailed their pit stops, and Dwight had a brilliant stint, so it was a good points day, and I’m glad it’s a quick turnaround to Mid-Ohio.