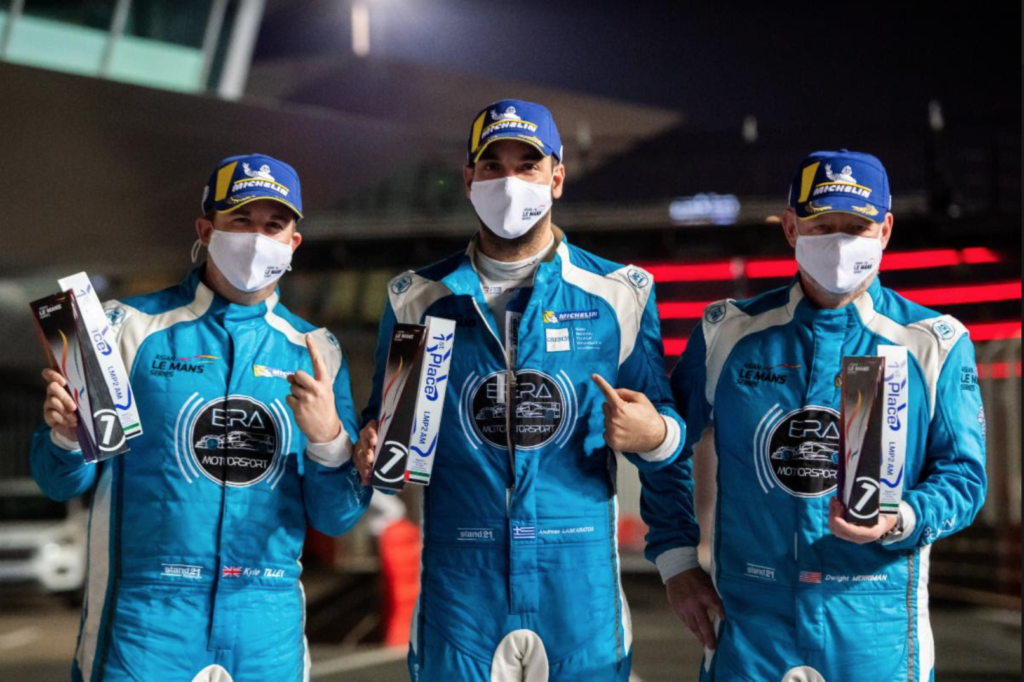 DUBAI, UAE. (February 15, 2021) – Riding the momentum of their January victory at the Rolex 24 at Daytona last month, Era Motorsport keeps the winning streak alive following a successful debut weekend in the Asian Le Mans Series with JOTA Sport. The LMP2 team claimed top honors in the Am class, winning both races from pole position with drivers Kyle Tilley, Dwight Merriman, and Andreas Laskaratos.

The four-race season championship began with a double header at the Dubai Autrodrome, with Saturday and Sunday hosting the back-to-back races. Over 100 drivers from around the globe descended on Dubai to race 36 cars in the opening event. The No. 18 Oreca LMP2 car qualified on LMP2 Am pole position for race one, starting sixth overall.

Laskaratos took the green flag in warm, overcast conditions, moving up to fifth place on the start, avoiding early race drama to maintain position. The No. 18 Oreca got one of their required timed pit stops out of the way early, exiting pit lane just before the race leader, but the cold tires and full tank of fuel allowed the Era Oreca to slip a lap down. Undeterred, the team stayed focus on the next stint, encouraging Dwight Merriman to have a clean and consistent run, knowing they could move back up to the Am lead during the remaining three hours. Kyle Tilley took command of the car with roughly two and a half hours to go. A full course caution at the halfway point brought the field back together and cleaned up the track. Tilley ran a double stint, setting a good pace to keep up with the field and conserving tires and fuel for a final charge. The patience paid off, and the team was able to save roughly five laps through fuel saving. With just over an hour, fifteen minutes remaining, the No. 18 Era Oreca passed the #11 Eurointernational Ligier JS P217 Gibson, taking the class lead. Laskaratos resumed his driving duties for the final hour, conserving his tires but maintaining position to finish the race first in the LMP2 Am class, sixth overall.

The following morning, Dwight Merriman lead the LMP2 Am cars to green, but a brief lock up in the opening turns moved the No. 18 Oreca to second in class as the No. 11 took the lead. The team pitted just as a first course yellow came out in the first fifteen minutes of the race and were able to complete their first of three required 110-second pit stops. He had a competitive run, putting in a good pace on triple stinted tires to bring the car back into a position to fight with the pack. Kyle Tilley took over with two and a half hours remaining, starting his stint in tenth overall, leading the LMP2 Am class. Tilley ran a double stint, moving up to the top five overall positions. Andreas Laskaratos again took over for the final stint, keeping the No. 18 Oreca at the front of the field to the waving of the checkered flag, earning the team their second LMP2 Am class win of the weekend.

Rounds three and four, the final two rounds of the Asian Le Mans Series, will take place roughly 60 miles southwest at the Yas Marina Circuit in Abu Dhabi. Testing begins on Wednesday, with Friday hosting qualifying and race three, followed by race four on Saturday. Both races will air live on the Asian Le Mans Series website, Facebook, and YouTube.

Driver Quotes
Kyle Tilley
Two wins from two races. You can’t ask for more than that! To have won the first ever LMP2 Am class race is pretty special also. Everyone at JOTA has been a pleasure to work alongside and I’m excited to go to Yas Marina next week for rounds three and four. Both Dwight and Andreas drove very well, and I think we’re in great shape going into next week!

Dwight Merriman
I’m proud of our strong opening weekend in the Asian Le Mans Series. Jumping into a new series always comes with a learning curve, especially in a field as competitive as this LMP2 class. Everyone at JOTA Sport and Era Motorsport did an incredible job putting together a great car to fight over the four hours, and Kyle and Andreas are great co-drivers. I’m excited to move on to Yas Marina to see what the next two rounds have in store.

Andreas Laskaratos
Our first ever Asian Le Mans race weekend, with two races back-to-back could not have gone better, securing two first places in the LMP2 Am class, as both my teammates, Kyle and Dwight have done a superb job.

Of course, we had our fair share of setup challenges starting the week, but we managed to push through those issues and learned a lot. I’m ready now to continue pushing next week in Abu Dhabi!