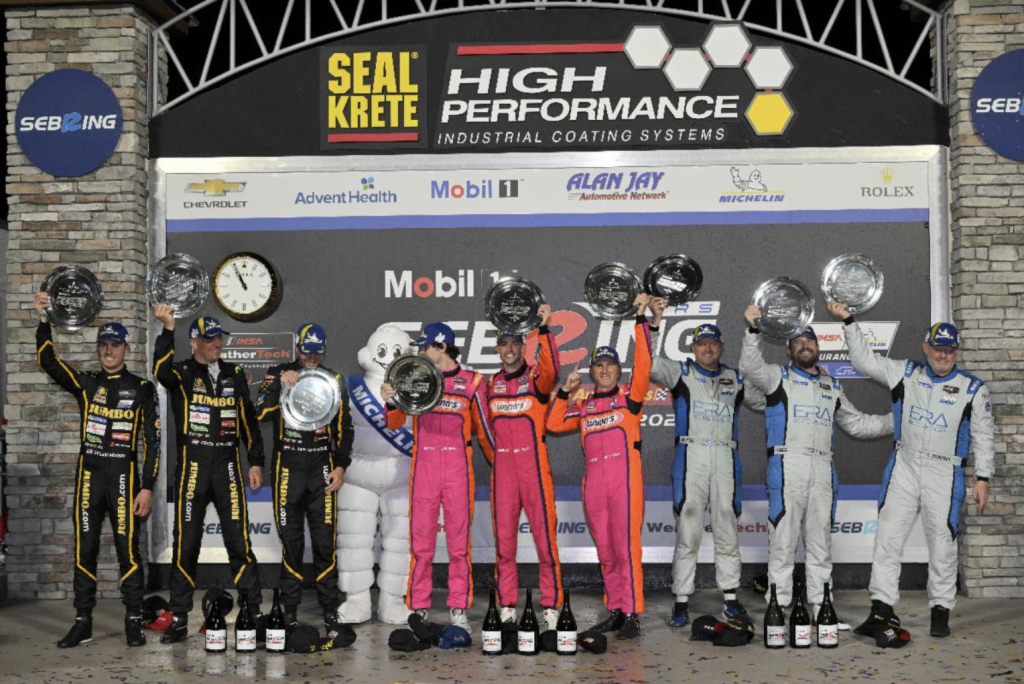 SEBRING, Fla., (March 20, 2022) – Era Motorsport returned to the podium at Sebring International Raceway for the second consecutive year on Saturday evening, braving hot temperatures to finish third place at the always challenging Twelve Hours of Sebring. Drivers Dwight Merriman, Ryan Dalziel, and Kyle Tilley raced all twelve hours of the second round of the IMSA WeatherTech SportsCar Championship without air conditioning in the No. 18 Oreca, surviving a calamity-filled race to earn their first podium of the 2022 season.

Dwight Merriman qualified the No. 18 Oreca on Friday morning, putting in a quality performance to set the team up to start in third position for race day. The field took the green flag under muggy, overcast conditions, which quickly burned away by late morning to allow the sun to bake the Sebring, Florida circuit. Temperatures climbed to a high of 92 degrees, the highest of the weekend.

The team’s first instance of attrition started almost immediately when the No. 18 Oreca’s air conditioning failed to work. Merriman, Dalziel, and Tilley drove the entire Twelve Hour race with no cooling system at one of the most difficult circuits on the IMSA WeatherTech SportsCar Championship Calendar. Despite the hardship, the team put in a good performance, beginning with a double stint from Merriman. He had a strong chance with the No. 81 Oreca, challenging his LMP2 competitor for second place. He pitted in fourth with 80 laps complete, passing the driving duties to Dalziel.

From there, the trio rotated through, with the engineers and strategists in pit lane expertly keeping the car in the top five positions in the LMP2 class, working cautions to the team’s best advantage. The No. 18 Era Motorsport Oreca proved to be tough competition in the tight field, consistently closing in on the cars ahead, gaining time with each lap.

Dusk provided a welcome respite for the team, allowing temperatures and humidity to cool down over the circuit. The No. 18 Oreca climbed to second place in the final hours, but a punctured tire forced Ryan Dalziel to make an unscheduled stop, dropping the team back to fifth place. Never giving up, the Indianapolis-based group persisted, with Dalziel and Tilley trading turns, each doing their best to gain back lost ground. In the final 30 minutes, Dalziel captured third position, and held it to the checkered flag, bringing home a much-needed podium after a difficult day.

Era’s IMSA WeatherTech program resumes April 29 to May 1 at WeatherTech Raceway Laguna Seca in Monterey, California. The race will be the team’s first sprint event of the 2022 season, racing for two hours, forty minutes through the rolling hills of Monterey. Merriman and Dalziel will race together, with Tilley, the team’s endurance driver not returning to the car until June’s Sahlen’s Six Hours of the Glen at Watkins Glen International in New York. For schedule information, visit imsa.com.

DRIVER QUOTES
Dwight Merriman
Four hours into the race, we were fighting well for second or first place. But as happens in endurance racing to everyone sooner or later, we then had several random issues, one, for example, being a puncture, and little luck on the timing of cautions to mitigate. This all added up. I really admire the team’s tenacity as we fought back to a podium spot with focus, execution, and good strategy.

Ryan Dalziel
This was physically one of the toughest races I’ve done in a long time. After my first double stint, and I knew I had three more doubles to do, I was fairly concerned that we weren’t going to be able to last the whole race. Thankfully once the humidity dropped, it got better as the race went on. We would have been closer to the leaders if it weren’t for our puncture when we were running in second on the lead lap. That set us back and left us hoping for a yellow we didn’t get. It was a good rebound from a bad Daytona. Flawless job from everyone on the team and my teammates. It was a good points day, and on to the next one.

Kyle Tilley
Because of the heat alone, this was one of the hardest races I’ve ever done. I think the temperatures were floating around 90 degrees Celsius inside the car. It was relatively miserable in the car. We had a puncture for Ryan, which was unfortunate and took us out of contention to win the thing. We think we cracked an exhaust header as well, so we were possibly down on power a bit from where we should have been. After all of that, this one feels like a win.