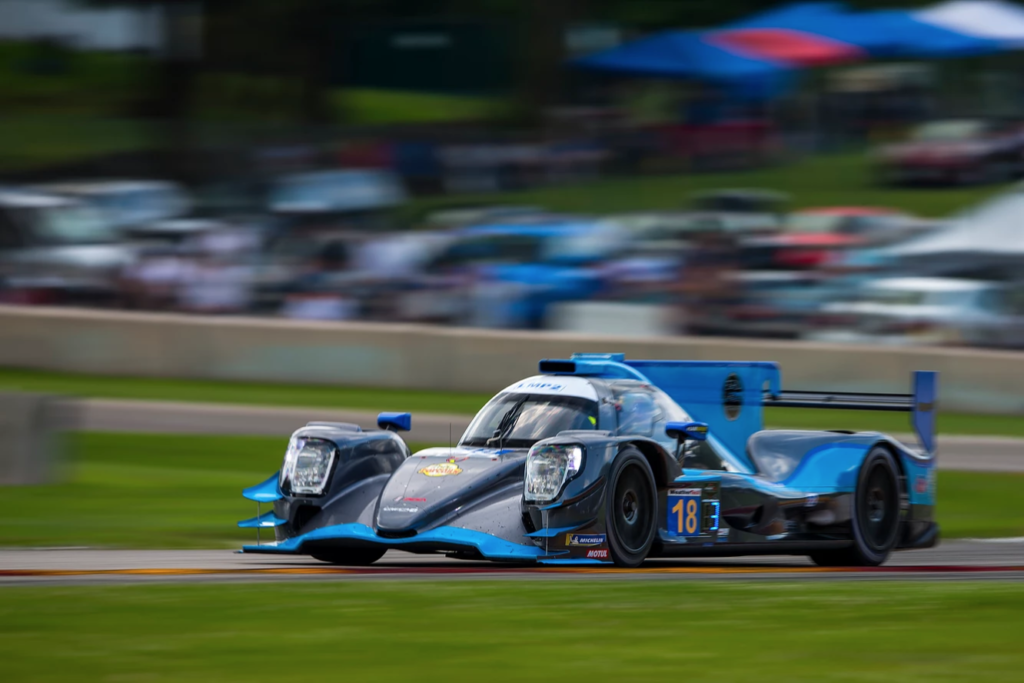 Dwight Merriman qualified the car, setting a fourth-place starting position for the two hour and forty-minute race. He took the green flag under clear blue, sunny skies at the four-mile Wisconsin circuit. In lap three, Merriman made the pass for third position, and stayed close to the No. 81 of Henrik Hedman in second place. An early spin sent Merriman off track momentarily, but he rejoined, expertly avoiding any contact. The excursion cost him third place, with 18 seconds of ground to make up. About 30 minutes running, the team diverged from the expected strategy, pitting Merriman for fuel only. Just about 40 minutes running, Merriman reported he had contact from behind multiple times in the span of a few short minutes. Although he went off course, he quickly rejoined again without any additional contact. Fifty-seven minutes running, Dwight completed his stint, and brought the No. 18 Oreca in for a full-service stop.

Kyle Tilley took over, rejoining in fourth position. The gravitational pull of the No. 18 seemed to still be strong for Kyle’s stint, as the car again suffered contact from another prototype competitor. Kyle continued to push throughout this stint, working hard to make up the lost time. With an hour to go, skies over the track darkened, threatening rain with each passing lap. Tilley made a stop for fuel and tires with an hour to go, again pitting before the majority of the class.

With roughly 30 minutes remaining, the skies opened and a heavy storm unleashed massive amounts of rain on the circuit. The entire field was caught out in the storm, and the No. 18 Oreca was one of several cars to go off course. Tilley kept the car clear of damage and made it to pit lane with the rest of the field, following the entire race being red-flagged for severe weather.

Tilley restarted in third, as the rain continued to pour over portions of the circuit. The final 15 minutes produced just a handful of laps of pure chaos, as competitors hydroplaned all over the four-mile course. In the end, the No. 18 Oreca finished in third for the third consecutive time, closing out a valuable points weekend.

“What a wild race,” said Kyle Tilley. “That one had it all, and I’m happy to make it through relatively unscathed! Dwight had a cracking open stint, and showed some real pace compared to his peers. Our crew put together such a great package for this event, and the car couldn’t have been better to drive!”

“What a fun race,” said Merriman. “The Era Motorsport crew prepared a fantastic car which was a delight to drive. I’m constantly learning and getting ever close to the pace. I can’t wait to get back to battle for the upcoming Road Atlanta race.”

The LMP2 class will next race at Michelin Raceway Road Atlanta September 4-6 for the newly rescheduled six-hour race to replace the Six Hours of the Glen. For full schedule and event information, visit imsa.com.