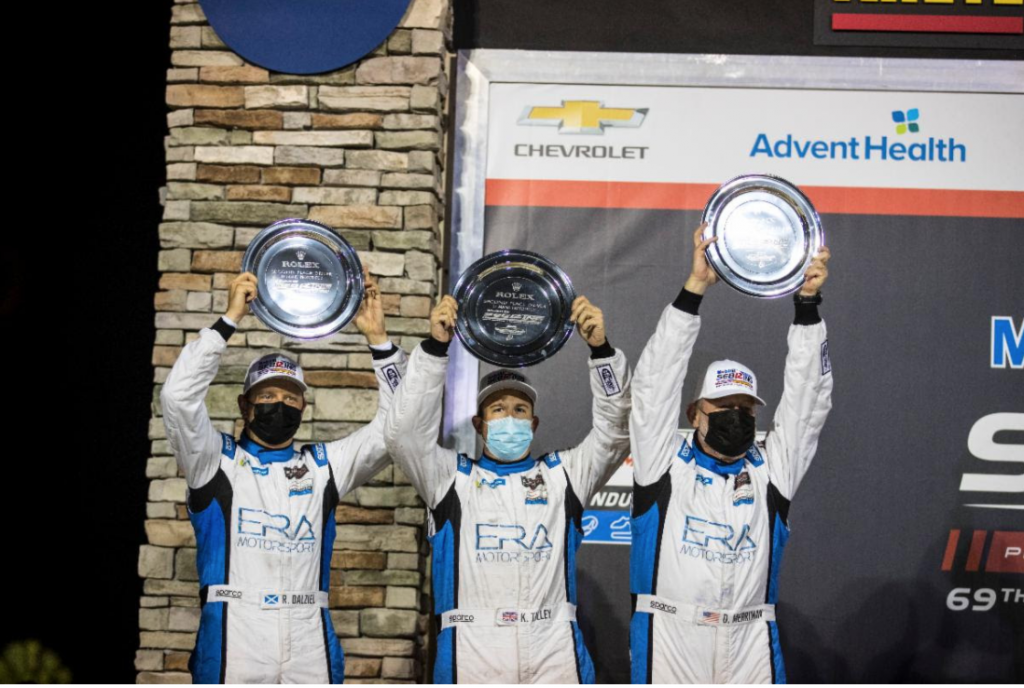 INDIANAPOLIS, Ind., (March 21, 2021) – In their first attempt at the Twelve Hours of Sebring, Era Motorsport earned a second-place finish on Saturday in the IMSA WeatherTech SportsCar Championship event. The No. 18 Oreca of Kyle Tilley, Dwight Merriman, and Ryan Dalziel started third and endured a long twelve hours of racing to earn the coveted podium position, two months after celebrating victory at the Rolex 24 at Daytona.

After one of his better runs to date, Dwight Merriman put in an impressive qualifying session on Friday afternoon, setting the team up to start third on the grid for Saturday’s big race. True to her usual form, Sebring International Raceway provided a race full of excitement, calamity, and incredible racing over the course of the twelve hours. A series of bad timing on full course cautions interrupted the team’s strategy, eventually putting the blue Oreca down a lap, though still in second place. The team never gave up, working consistently to maintain position in hopes that another caution period would grant the passaround needed to get back on the lead lap, sure enough, with less than 30 minutes to go, another incident brought the No. 18 back on the lead lap for a brief 20-minute sprint to the checker flag. Despite the effort, the team finished second, securing a strong podium result in a grueling race, and valuable points to go towards the championship.

The second-place finish marks the end of the team’s winning streak in 2021, having scored class victories in five races before last weekend’s festivities. However, with the podium result, the team now stands second in the IMSA WeatherTech Sports Car Championship LMP2 full-season standings, as well as the Michelin Endurance Cup. Up next, the team heads to Barcelona in April 12-13 for a European Le Mans Series test before competing in the opening round of the season, the 4 Hours of Barcelona, on April 17-18.

Kyle Tilley
“If you had told us at the start of the race that we’d be finishing second, we’d probably be pretty happy with the result, but now with seeing what a strong performance we put in and how close we were to first position at the end, its hard to be completely satisfied. We were really aiming to have our sixth straight win this weekend, and it would have been nice to win the double of Daytona and Sebring. It came down to it at the end. We’ll go home, have a think and see what we can do better next time. Onto Barcelona.”

Dwight Merriman
“While everyone is a little disappointed that we didn’t earn our sixth win in six races today, I’m still very proud of our second-place finish in our first Twelve Hours of Sebring. This track is legendary, and this race is incredibly demanding.”

Ryan Dalziel
“That was definitely an exciting race. Obviously, everybody wants to win, but considering where we were with a couple of hours to go, second place is still a little disappointing. We just got caught with a couple of bad yellows that put us a lap down. We got thrown a good luck charm there at the end and it put us back on the lead lap. It was an exciting last 30 minutes. The 52 car had the legs on us throughout the race, so to be as close as we were is a personal victory for us.”