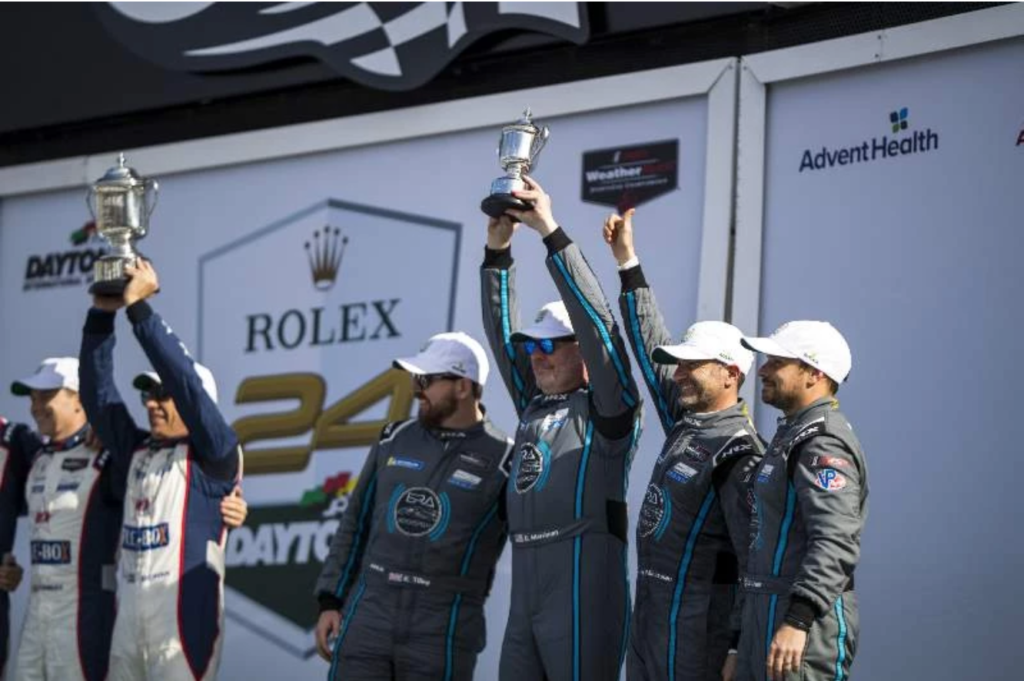 DAYTONA BEACH, Fla., (January 27, 2020) – Era Motorsport, the little sports car team that could, raised eyebrows this weekend at the IMSA WeatherTech SportsCar Championship season opener, the Rolex 24 at Daytona. The premier sports car racing series in North America began its 2020 season with the 24 hour long endurance race, and newly formed team Era Motorsport not only persevered, but put on an impressive performance to secure a third place finish in the No. 18 Oreca 07 in the LMP2 prototype class.

Team Owner Kyle Tilley oversaw the expansion of his vintage and historic racing team to include a full season program in the 2020 IMSA WeatherTech Sports Car Championship. Kyle, the first driver of the team, was joined by drivers Dwight Merriman, Nic Minassian, and Ryan Lewis, and the team’s Rolex 24 At Daytona program began less than two months before the big race. Racing against programs with vastly more experience in sports car racing, Era’s sports car efforts came together in record time, to not only run error-free during the race, but also clock in competitive lap times to come close to the more seasoned teams.

The team qualified fifth in the LMP2 class for Saturday’s green flag at Daytona International Raceway, but a last minute change in the starting tire set moved the team to the back of the DPi and LMP2 prototype fields to start in 13th. Despite the early setback, the team focused forward, determined to execute a strong first event.

With each stint, pit stop, and strategy call, the team worked faultlessly, focusing on finishing the race with a clean car, and an effort that reflected the character of the men and women that formed the new team. The weather stayed clear for the race, despite chilly temperatures late Saturday night and early Sunday morning. Unlike many of their competitors, the team finished the 24 hour long endurance race without a scratch on the car, proud in the strong effort everyone put forth.

The Indianapolis, Indiana based team has several weeks of down time before competing in the second round of the 2020 championship, the Mobil 1 Twelve Hours of Sebring at Sebring International Raceway, March 18-21. Also an endurance event requiring multiple drivers sharing a sports car over the course of many hours, the event is known to sports car fans all over the world as a challenging, iconic event. For full event information, visit imsa.com.

I’m speechless. Everybody did such a great job, Dwight Merriman especially. We knew it was achievable to come away with a podium, but to actually do it is so special; I can’t even put it into words! I’m thrilled for everybody involved. To come away from nothing to a podium in the Rolex 24 at Daytona speaks volumes about the level of our staff and their commitment to the program. It wasn’t a Rolex, but we’ll be back!

I was so impressed with everything the team did and how quickly they put it all together. The whole run was mistake free, and all in the very short timeline we were on. It was awesome.

Two months ago, Era Motorsport didn’t even have a car, let alone a team. I think that’s what we see as a victory today, because everything really had to speed up a lot with the first shakedown of the car in December. To ship everything here, put the team together, and perform so well is a massive credit to Kyle and his crew. My hat’s off to them. Without the team or a car you are worth nothing. I am very proud to have been part of this new era of Era Motorsport and I really enjoyed myself. Big congratulations to Dwight, because it is a big thing and to come here and do what he did with the amount of experience he previously had over his belt. It’s very physical and he did fantastic, and didn’t make any mistakes. Without him we wouldn’t be here. The mechanics prepared the car and it was faultless all race. There were no missed pit stops or procedures. All we did was put in fuel, tires, and drivers. We finished a few laps behind the leaders, but it’s like a win. I’m very proud and very happy.

Wow, what an incredible experience. Where we finished today is because of the level of preparation that everyone at Era Motorsport put in in the months preceding this. The fact that everything came together so quickly, all us drivers had to do was drive. We didn’t have to worry about anything else. It was always going to be a good result.