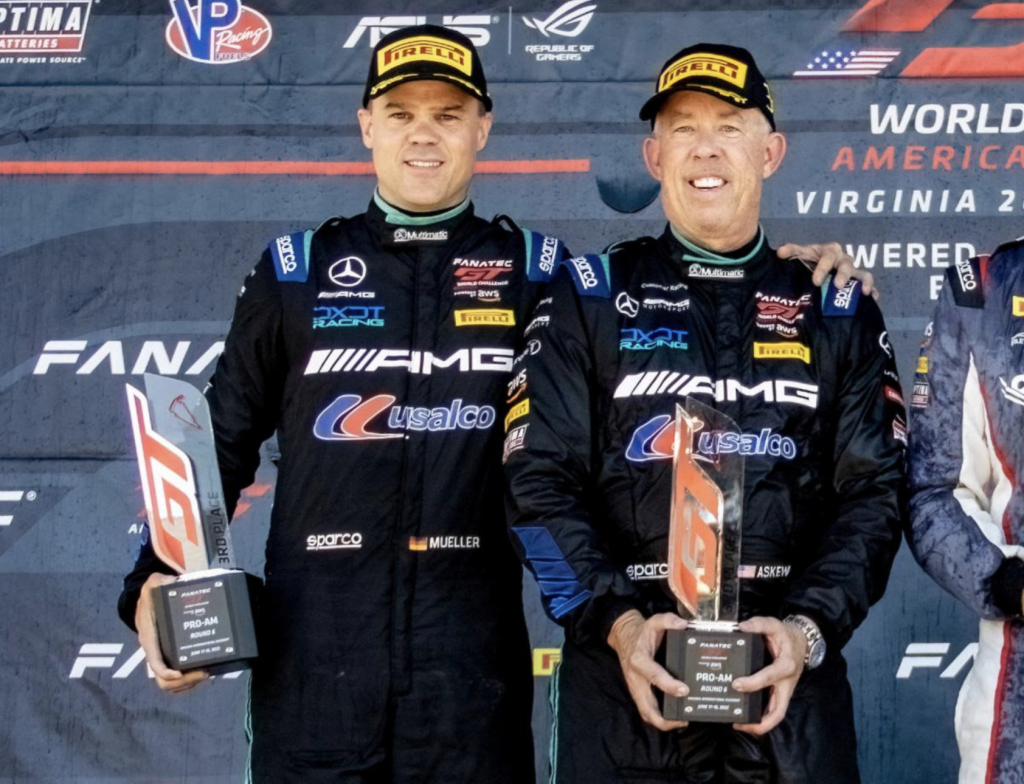 ALTON, Vir., (June 20, 2022) – Riding on the momentum of their continued progression with every race weekend, DXDT celebrated a double podium weekend in the Fanatec GT World Challenge powered by AWS at VIRginia International Raceway. Team owner and driver David Askew, along with co-driver Dirk Müller and team, earned a pair of third place finishes at the team’s home track in the No. 63 Mercedes AMG GT3. Teammates Scott Smithson and Bryan Sellers also had a rewarding run, concluding the weekend with another top-five finish in the No. 08 Mercedes AMG GT3.

Scott Smithson produced a strong qualifying session for race one, starting the opening event from fourth in class, with teammate David Askew starting from eighth. The field took the green flag on Saturday afternoon for the 90-minute sprint race, and Smithson held off early pressure from the No. 45 of Charlie Luck before the first full-course caution. Bad luck struck early for the No. 08, forcing Smithson to put the car unexpectedly with a broken toe link. The car was able to continue racing, but a lap down from the rest of the field. Askew had a clean stint, after dropping two positions on the start, he climbed up to fifth place in class before handing the wheel over to his pro driver, Dirk Müller. Sellers had to pit later in his stint, due to another issue with the car, but ultimately was able to continue the race, looking to score any amount of points to go towards the championship. Jeff Burton was the first driver to have an incident, bringing out the first full course caution. Ziad Ghandour was the next car to careen off course, followed by several more as the race continued. Müller’s consistent driving kept the No. 63 Mercedes in position to climb through the field, ultimately earning a third place finish, the pair’s first of the season.

Since the AM drivers started race one, the Pros took their turn to start race two. Dirk Müller, racing the No. 63, took the green flag from sixth place in the Pro/Am class, while the No. 63 started from 10th with Bryan Sellers driving. An incident in the opening lap temporarily paused the racing action, but both blue and green Mercedes AMG GT3 cars had already made progress, with Müller moving up one position to fifth and Sellers up three positions to seventh. The field endured the first full course caution by lap two, brought out by a brake failure for the No. 91 Lamborghini of Corey Lewis. After resuming racing, a second full-course caution suspended the racing for about 20 minutes after an incident between the No. 43 Acura of Michael Cooper and the No. 88 of Madison Snow. The race went back to green, and Müller and Sellers held fifth and seventh to the end of their stints, pitting for their mandatory driver changes to Askew and Smithson. Sellers pitted the No. 08 first, followed the next lap by the No. 63 of Müller. As pit stops cycled through, Askew had climbed to fourth, and Smithson held seventh place. In the final ten minutes, both the class leader and the third-place cars spun off course, moving Askew and Müller up to third place, and Smithson and Sellers up to fifth, where they ultimately finished.

The team will carry their momentum into rounds seven and eight of the 14-round championship at Watkins Glen International in upstate New York, July 22-24. DXDT Racing has previously enjoyed satisfying runs at the iconic road course before, earning a podium and a second top-five finish in 2021, and three top-five finishes in 2019.

David Askew | No. 63 USALCO Mercedes AMG GT3
VIR a beautiful track and it’s just a real thrill to drive a race car here. It’s been a while since we’ve been on a podium and to do it twice this weekend is really an awesome thing. Like Dirk said, we’ve been working super hard and the results haven’t really shown, but we’ve had pace and we’ve had the ability to get the car on the podium so now it’s just up to executing and stop doing dumb AM driver things, and the results come. That’s what I’ve always believed, you just put the work in, you leave no stone unturned, and the results come. For here at VIR, it’s absolutely my best drive ever with back-to-back two days in a row. I’m kind of high-fiving myself in that area, it’s good for me. I expect the Pros to do their thing, and my Pro is one of the best in the business and he certainly did his thing.

Dirk Müller | No. 63 USALCO Mercedes AMG GT3
Wow! What a nice weekend. I kind of knew we would always be good. I knew early on that I’m going to like this year. VIR is my second favorite track here in America. The team did awesome. David made absolutely no mistakes all weekend. He was on his toes and did a fantastic job. After yesterday’s podium, I think we just took the momentum for today and had a very good race finishing third again. I’m really happy.

Scott Smithson | No. 08 Qelo Mercedes AMG GT3
It was another learning experience for me. I think we did everything that we could. We’re just learning more and more about the car. I think we’ve got to qualify better than we have been, clean some of the mistakes up, and clean up some of the mistakes on the car mechanically. We have to make sure that we learn from all these things and get better next time.

Bryan Sellers | No. 08 Qelo Mercedes AMG GT3
It was a really good weekend for the No. 63 car with two podium positions, so I’m super happy for that. You’ve got to have a good strong team environment and be happy when they’re able to convert everybody’s hard work into results. Congratulations to them. On our side I feel like we just under delivered all weekend, which is honestly disappointing. Different times in the weekend Scott and I both showed enough speed to be better than what we did and certainly the guys worked harder than the results would identify. We need to go back, reevaluate, and make sure we come to the next round ready to go. Hopefully we are able to get our guys and Scott and I a result.