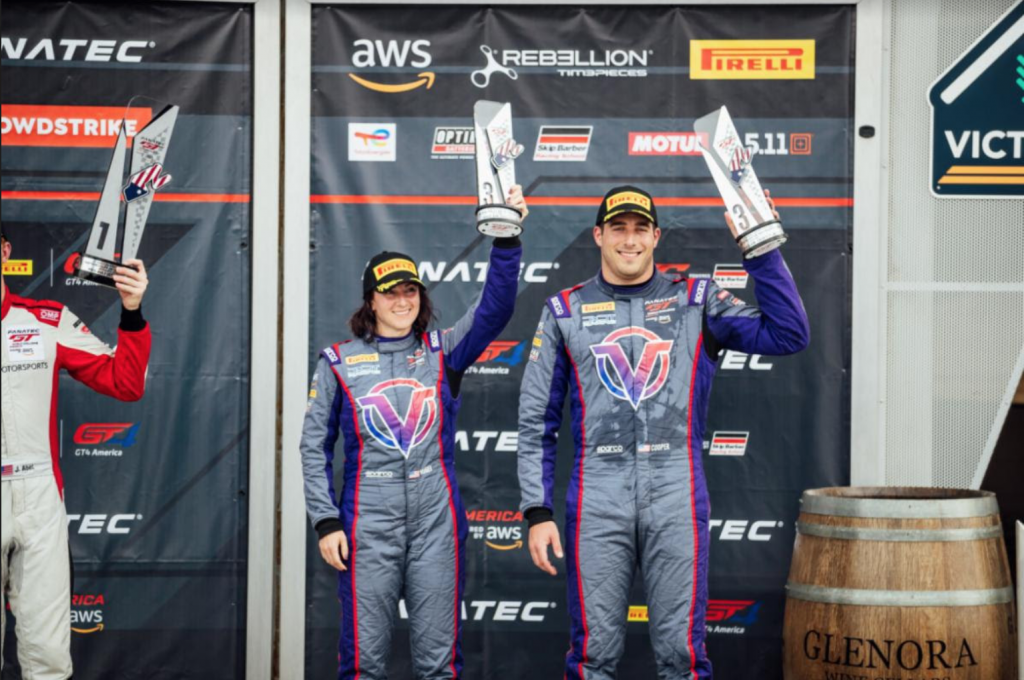 GT World Challenge America powered by AWS
Following a successful test session earlier this month at Watkins Glen International, the pair of DXDT Racing Mercedes AMG GT3 cars showed positive performances heading into qualifying. It was Erin Vogel and the No. 19 Mercedes that led the charge, taking her first SRO America pole position on Saturday morning, with the No. 63 Mercedes of David Askew and Ryan Dalziel set to start from sixth in class. Vogel ran a flawless performance at the head of the Pro/Am class, but ultimately the Mercedes AMG did not have the power to match the pair of Acuras. She raced hard and clean until the end of her stint, with Michael Cooper getting in to join the race from third. He maintained position to the checker flag, earning the pair their second podium of the season.

Askew rebounded from an early race spin, rejoining in ninth, but struggling with a vibration in the car throughout the entirety of his stint. He finished his stint in eighth, and Ryan Dalziel took over after the mandatory stop, having a strong battle with Madison Snow in the Zelus Lamborghini for seventh in class. While Dalziel was able to get in front of the Lamborghini, Drew Stavley and his Aston Martin got by in the final laps, resulting in a seventh-place finish for the No. 63 Mercedes.

In race two on Sunday afternoon, the pair of Mercedes started fifth and eighth overall, with the No. 19 Mercedes of Michael Cooper leading the team charge. Both climbed up in their opening stint, with Cooper advancing to second and Ryan Dalziel and the No. 63 up to fourth. Both drivers battled with their fellow Pro drivers while running the Pro/Am class, producing great side-by-side battles. After an entertaining race with the No. 3 K-PAX Racing Lamborghini, Dalziel reported a strong vibration coming from his car’s splitter, and the car ultimately ended up back at the garage for repairs. The car made it back out and David Askew took over for the second half of the race to earn championship points, having one of his most impressively consistent drives of the season. The car finished seventh in class. Erin Vogel took over the No. 19 Mercedes at the halfway point, and the car struggled to keep pace with the cars in the field with more power. Vogel and Cooper finished fifth.

Sebring International Raceway will host the final double-header of the year, October 1-3 before the series heads to Indianapolis Motor Speedway for the Indianapolis 8 Hour for the season finale.

David Askew | Fanatec GT World Challenge America powered by AWS
No. 63 CrowdStrike/ DXDT Racing Mercedes-AMG GT3
Overall it was a good weekend for the team. The No. 63 had its problems with most, not all, caused by the Bronze driver. Today we had an unfortunate problem with the front end of the car, but we got it fixed and got it back on track. I got my stint in, which was awesome for the team to be able to do that. Kevin Boehm was back on the podium with two second-place podiums, so he’s pretty happy with that. He hadn’t been on the podium for a while, so it was great to see him return. Erin Vogel earned her first pole in the series on Saturday, which was awesome, then she and Michael Cooper went on to get a podium. She should be happy with her results this weekend after battling up front.

Ryan Dalziel | Fanatec GT World Challenge America powered by AWS
No. 63 CrowdStrike/DXDT Racing Mercedes-AMG GT3
It was a tough weekend for the 63. We missed it a little bit in qualifying. I didn’t do the best of jobs during my qualifying run. So we had a little bit of an uphill battle that didn’t go away we had planned. We had a splitter malfunction in race two, and we’ll look at the video to see if I hit something. It’s a little bit of a head-scratcher right now. We had to pit to fix that and put David Askew back out to get some laps, which was a good call from our engineer, Stefan. David probably had his most consistent race of the season so far. So I’m taking the good from the bad. David did a great job and we ended on a high note. We’ll head to my home race in Sebring.

Erin Vogel | Fanatec GT World Challenge America powered by AWS
No. 19 CrowdStrike/DXDT Racing Mercedes-AMG GT3
I’m super happy with our with my debut weekend here at Watkins Glen. I really love this track, and I took to it really quickly. It has this fast, flowy feeling that I think really suits my driving style, and Michael Cooper’s as well. We had a great day on Saturday, with my first pole position in the series and GT3 racing in mixed conditions, which was just even better. I used to struggle with that, but this DXDXT Racing Mercedes is such a confidence-inspiring machine in those mixed conditions. I just knew I could go out with confidence yesterday morning. So that really set the tone for our race, and we had a great race. We knew there were some cars that were stronger than us in the field. Our position in the field depended on what happened further back in the field. We ended up third on the podium yesterday, which was really still a great result. Sunday, we started a little further down the field and had some great racing, but once again, you know, found some faster traffic found us right away and it didn’t quite turn into the race that we wanted it to be. But we feel like we had really good momentum here this weekend, and we’re really looking forward to seeing what we can do this evening in a couple of weeks.

Michael Cooper |Fanatec GT World Challenge America powered by AWS
No. 19 CrowdStrike/ DXDT Racing Mercedes-AMG GT3
Overall it was a pretty good weekend, with Erin Vogel getting the pole and us finishing on the podium for race one. The car was pretty good yesterday and we still managed to improve it today. The car was really good—the best it’s been all year. Still, we couldn’t match the power of some of the other cars. Everyone did a great job. All the boys and girls really came together and put out a strong effort his weekend.

Boehm will next race at Sebring International Raceway, October 1-3, his second to last double-header of the 2021 season.

Kevin Boehm | TC America
No. 9 CrowdStrike/DXDT Honda Performance Development Civic Type R TC
Watkins Glen was a really good event for us we’ve struggled for the last couple of events, and we’ve finally got to the bottom of a couple of the things that were holding us back. Our two second-place finishes really show the progress that we’ve made and we still have a little bit of work to go to move up to the next step of the podium. It’s really fortunate we’re going to Florida in two weeks so we don’t have much time to think about what we could have done differently, but we can put our heads down and just focus on the next race. We just need to improve the car, improve myself, and we’ll find that extra little bit we need to start winning races again this season.