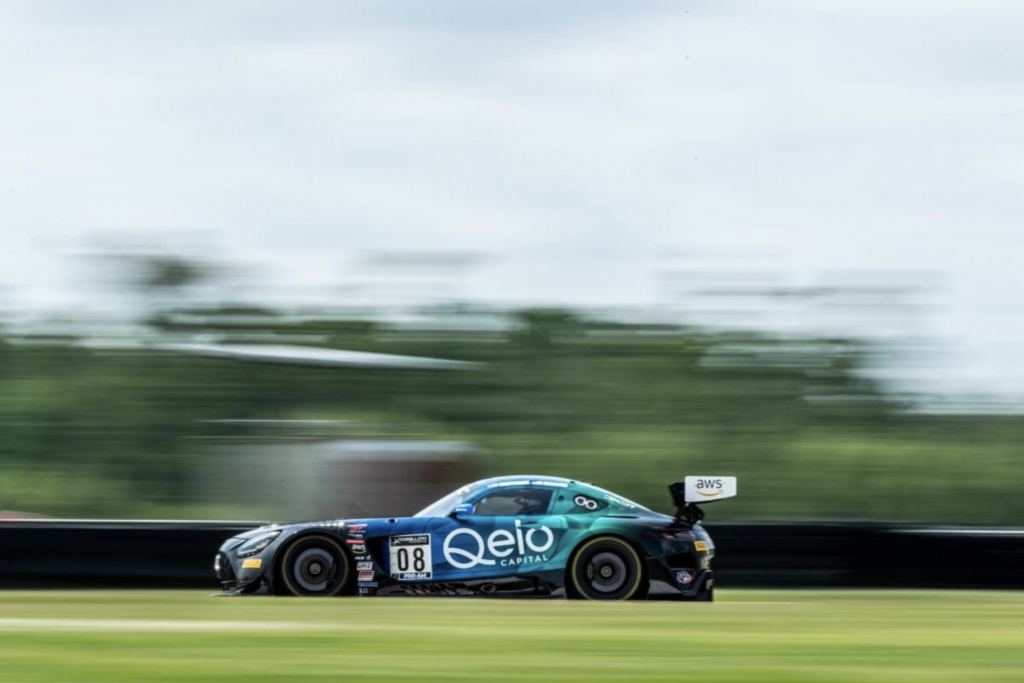 Both the No. 8 of Smithson and Sellers and No. 63 of David Askew and Dirk Muller had a challenging race one, with both machines suffering contact from other cars. Both cars and sets of drivers raced as long as they could to accumulate points for the championship, but ultimately, the No. 63 was forced to retire early, and the No. 8 salvaged points for a top-ten finish.

The team regrouped and focused on the second race day, determined to make the most of the 90-minute window to race to the front. Sellers started race two from second in class, and Muller from seventh. Bad luck greeted Muller and the No. 63 early on, when a piece of metal debris lodged in his right rear tire, causing a slow bleed for the duration of his stint. He stayed on track until the problem presented a safety issue, and finally pitted for a new tire before completing his stint. Meanwhile, Sellers engaged in a heated battle in the lead back, racing in hot and muggy conditions to hold off Bill Auberlen’s BMW. Sellers and Muller closed out their stints with no further issues, handing each of their machines over to the amateur drivers to close out the race. Though the No. 63 lost precious track time due to the tire debris, his stint produced fast lap times and consistent runs. Smithson rejoined the race in third, and Askew 12th with 31 minutes remaining. Smithson found himself in a six-way battle for position, slipping to fifth, but he quickly fought to reclaim fourth place with ten minutes to go. He held position to the checkered flag, earning the team its first top-five result of the season.

With nine rounds remaining in the 2022 championship, the battle for the Pro/Am titles remains wide open, and with a newfound momentum, DXDT Racing will look to continue their good luck heading into rounds five and six at VIRginia International Raceway, June 17-19. DXDT Racing had a successful weekend at the Alton, Virginia track in 2021, earning one win, one-third place, and one additional top-five finish at the fan-favorite track. For ticket information, visit virnow.com

David Askew | No. 63 USALCO Mercedes AMG GT3
Nola was tough! Between the heat, 130 F+, in the cars, and the busiest race track I’ve encountered in a long time, the whole team got an eye-opening workout. Overall it was a good weekend. The crew performed flawlessly and the cars were really great. We were always at the top end of the timesheets. Unfortunately, Saturday’s race was a throw-away, with both cars damaged in incidents, not of their own making. Sunday was better with Bryan and Scott in the 08 finishing P4 after a long hard battle. The 63 suffered a puncture during Dirk’s stint, so it was out of contention. If we ever come back to Nola, we’ve got our work cut out for us in the AC department. This place is HOT!

Dirk Müller | No. 63 USALCO Mercedes AMG GT3
Both cars finished the race, so that’s already a big improvement. The No. 8 car was very close to the podium. It had a very strong run. Unfortunately for us with the No. 63, I collected debris on about lap two and was just nursing the car until the tire pressure finally went down so much that for safety reasons, I had to come in before the window opened, which was disappointing. But you could see afterward that we put a used tire right rear only and we were showing great pace. Later they had a great stint to the end. I think we have done enough mileage to look forward and come back even stronger.

Scott Smithson | No. 08 Qelo Mercedes AMG GT3
I feel like I made big improvements this weekend. I learned a lot from the race yesterday and the mistakes that I made and just gathering myself up. We made big strides this weekend with the car. I think we had the pace, it’s just me putting it all together. Bryan brought the car in at a great position. I just need to execute and do my part.

Bryan Sellers | No. 08 Qelo Mercedes AMG GT3
I think this weekend was a really great weekend. I think it was a huge improvement over the previous three races. I think we hit a little bit of a stride. I think the car was really strong and really happy with how Scott raced at the end there. I think we just got a little unlucky in traffic and had things been a little bit different, we could have been on the podium. I’m just happy we were able to race and to race for that podium spot. I’m looking forward to getting to the next round where everyone’s a little bit more comfortable with the track and the surroundings and seeing where we stack up.