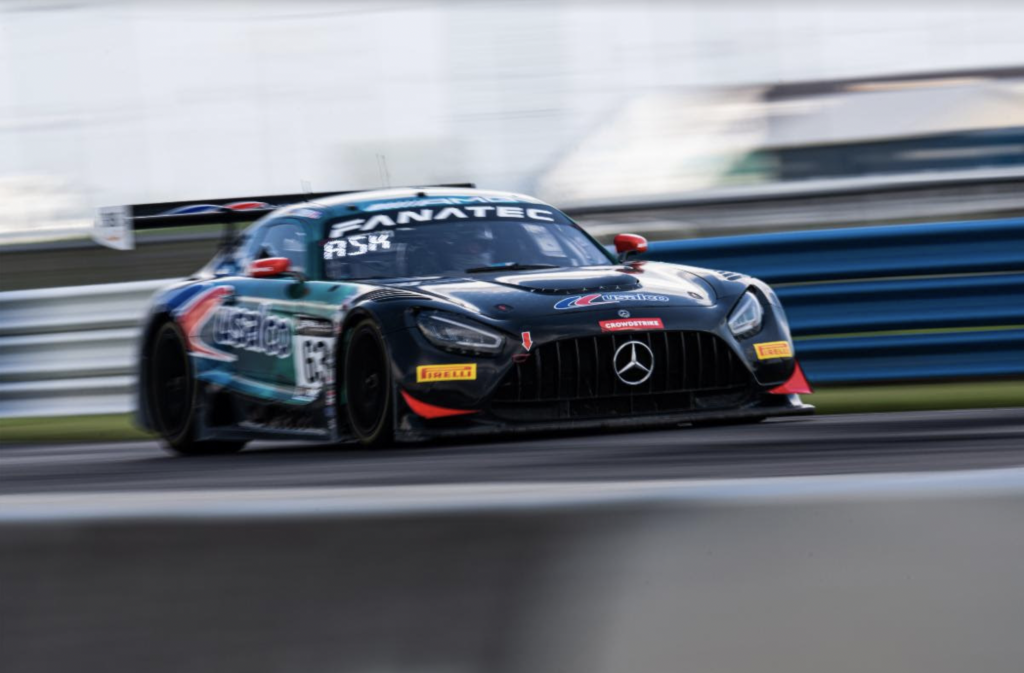 INDIANAPOLIS, Ind., (October 5, 2022) – The final fight for top honors in the Fanatec GT World Challenge America powered by AWS takes place this weekend at Indianapolis Motor Speedway, and though not in the championship fight, DXDT Racing will contest for the overall and am-class wins with a pair of revised lineups. The No. 08 and No. 63 Mercedes AMG GT3 will participate in the eight-hour endurance event, racing against 24 other entries in four classes.

As previously announced, DXDT Racing has chosen to change up the driver lineups, moving from two Pro/Am entries to a full Pro car with Dirk Muller, Bryan Sellers, and Patrick Assenheimer in the No. 63 Mercedes AMG GT3, and an all-Am entry with David Askew, Scott Smithson, and Valentin Pierburg in the No. 08. Each car will be competing in a separate class for a win, with the No. 63 Pro car seeking to claim the overall win in the season finale.

With three podiums and 10 top-five finishes, DXDT Racing remains hungry for the first win of the 2022 race season. In 2021, David Askew, Ryan Dalziel, and Scott Smithson led the team charge at the checker flag, finishing fourth in the GT3 Pro-Am class.

This season, the competitors will again run on the road course layout of the iconic circuit, boasting 14 turns in its 2.44-mile Grand Prix Road Course. The only endurance event on the 2022 calendar, the eight-hour race time is a big switch from the pair of 90-minute races the competitors face each weekend. This year’s Indianapolis 8 Hour will also have a new factor, with the race starting at noon Eastern, and ending roughly an hour after sunset. The 60 minutes of night racing will be new endeavor for many of the competitors, as this will be the first night racing event for the GT World Challenge America series.

The qualifying format will differ from the usual 15-minute session, as well. On the afternoon of Friday, October 8, each of the three drivers will have 15 minutes to set a fast lap time. the average of the three laps will be the entry’s official lap time, measured up against the rest of the field. The top-ten fastest cars will then be competing in the Pole Shootout: another 15-minute qualifying session that will set the grid for the top-ten starting positions in Saturday’s race.

The 2022 Indianapolis 8 Hour will begin on Saturday, October 9 at 12:00 PM ET, airing live on YouTube.com/GTWorld.

David Askew | No. 08 Qelo Mercedes AMG GT3
It’s great to be back at Indianapolis. We’re doing something different this year with the cars running an all-Pro team and an all-Am team. I’m super excited to see how the Pro team runs. This is the first time in DXDT’s team history that we’ve fielded an all-Pro effort. I’m looking forward to having a top-five. That’s our goal, and we’ll be happy if we can achieve that in this super competitive field. On the am side, we’re running Valentin Pierburg, who is a real bronze ace from Europe. He’s always wanted to run at Indy, and he’s happy to be here. We’re happy to provide a platform for him, Scott Smithson, and me to go out and compete in the Am class. Honestly, our real goal, since we’ve been running as Pro/Am team all year is to beat as many Pro/Am teams as we possibly can.

Scott Smithson | No. 08 Qelo Mercedes AMG GT3
This season has been a big learning year for me, and unfortunately, we aren’t in the championship hunt. I’m excited to run the Indianapolis 8 Hour with Dave and Valentin this weekend. Indy is such a cool place with so much history. We hope to have a good weekend.

Valentin Pierburg | No. 08 Qelo Mercedes AMG GT3
I am very much looking forward to racing in the US and with DXDT. This will be my first time but deafly not the last. Can’t wait to get my foot on to the throttle and experience this amazing Indy circuit.