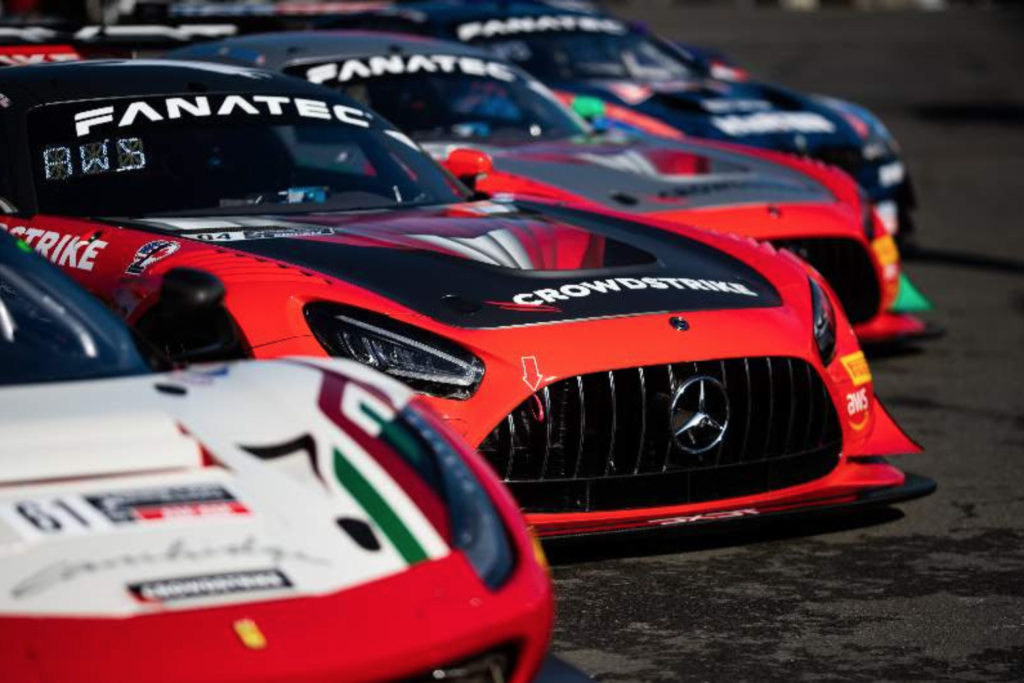 SONOMA, Calif., (March 9, 2021) – The new season of SRO America began this weekend at Sonoma Raceway, and sports car racing team DXDT closed out the opening event with six podiums and four wins between the GT World Challenge America, GT America, and TC America series. The Sonoma double header for each series was the first for DXDT’s newly expanded team, running four Mercedes AMG GT3 cars and a Honda Performance Development Civic Type R. The new squad kicked off the new year on a high-note, quickly establishing themselves as championship contenders in all three series.

GT World Challenge America
The DXDT Racing trio of Mercedes celebrated highs and lows in the first two races of the 2021 race season. The No. 04 Mercedes AMG GT3 of George Kurtz and Colin Braun suffered some early race contact in race one, forcing the car to pit for a new rear tire and fight from twelfth overall. The pair were able to rebound, earning a fourth-place finish in class, sixth overall. The crew of the No. 04 worked on the Mercedes to get her game-ready for Sunday afternoon’s race, starting from the Pro/Am class pole. Colin Braun had a strong start when the Pro/Pro pole-sitting car had an issue taking the green flag, and the No. 04 surged to the front of the field. The pair of Braun and Kurtz executed a flawless race, taking their first win of the season in class, finishing third overall.

The No. 63 Mercedes AMG GT3 of David Askew and Ryan Dalziel also had a character-building race one after being involved in an early-race incident, resulting in a drive through penalty. Askew was able to rebound from the setback, quickly catching back up to the Pro/Am class to race eighth in class before the first stop. Dalziel took over and engaged in a tight battle with the No. 93 Acura of Dakota Dickerson. In the end, Dalziel brought the car across the finish line in fourth place overall, earning a second-place finish with Askew. Race two did not go so well for the pair after an issue with the belts extended the mandatory pit stop, and then problems resulting from contact required an additional stop shortly after. They finished race two seventh in the Pro/Am class.

In the No. 19 Mercedes AMG GT3, Erin Vogel made a satisfying GT3 racing debut with co-driver Michael Cooper. Vogel started race one in 14th overall but climbed up to the top ten within the opening laps. She made it up to eighth place before an issue with her belts forced her to make an early stop. She and co-driver Michael Cooper were able to drive a clean race to rebound, earning a top five finish in class in her first GT3 race. They started race two from seventh in class, and had another clean and consistent run, battling with the No. 93 of Taylor Hagler and Dakota Dickerson, bettering the previous day’s result to finish fourth in class.

GT America
George Kurtz had a stellar weekend in the newly established GT America series, specifically built for bronze-rated drivers in GT2, GT3, and GT4 competition. In the No. 04 Mercedes AMG GT3, he dominated in both races, capturing each of the two wins from pole position. Despite getting a penalty for his starting procedure, Kurtz was able to effortlessly rebound, resuming the lead with just moments left on the clock in race one. He set the fastest lap of the race, setting him up to lead flag to flag in race two, effectively securing the points lead.

TC America
Returning 2020 TCA champion Kevin Boehm came to Sonoma Raceway ready for the challenge of stepping up to the TC class in the TA America Series. After two days of testing and practice, he qualified the No. 9 Honda in second place for race one, setting him up to start eighth overall. While the No. 9 Honda may have not been best suited for Sonoma Raceway, he had a strong performance in race one, earning a third-place finish in class and fourth place finish overall. The following morning, he started in third, based on his fastest race lap the previous day. Despite starting a further position back, he improved on his performance from the day before, clinching the win in the TC class and securing a third-place finish overall.

Up Next
From Sonoma, California, the team will return to their new 20,000 square-foot shop in Statesville, North Carolina to prepare for the next rounds of each of the series. Rounds three and four of the GT World Challenge America, GT America, and TC America will take place at Circuit of the Americas April 30-May 2 in Austin, Texas.

David Askew | Fanatec GT World Challenge America powered by AWS
No. 63 CrowdStrike/ DXDT Racing Mercedes-AMG GT3
We’ve been working hard with the pit crews. Kudos to them. They’ve worked hard and are getting the results. I’m really proud of them. It’s all the attention to detail and little things that make the difference. That’s what we’re all about here. I’m really happy about the day to day with our newly expanded team. Everyone did a great job and each of the cars had great results. We all brought the cars home safe and sound, and that’s all that matters. Overall, it was a great weekend for the team. It was great to get those first podiums in the first weekend.

Ryan Dalziel | Fanatec GT World Challenge America powered by AWS
No. 63 CrowdStrike/DXDT Racing Mercedes-AMG GT3
Obviously it was an unfortunate first lap in race one, but when David got back out there, he was lapping anywhere from a second to two seconds a lap faster than all the other Pro-Am cars. That was probably the best drive he’s had in a couple of years. It gave me a good starting point for my stint. I had a nice battle with the Acura, which was pretty fun. It’s a hard place to pass, so it was nice. I kind of laughed at myself on the move because it’s nothing I ever would have thought of doing. We battled hard with Jan (Heylen) and the Porsche there. It definitely seemed like he’d make a mistake and I’d make a mistake. There really wasn’t much between us. It’s a fantastic points start for the 63 car. It’s a good track for the Mercedes-AMG. It’s my third year with the team and for sure the best weekend so far to start. Race two was an incident-filled race for us. The pole-sitter didn’t get going and the whole left row just kind of got screwed at the start. I had a pretty decent race and passed a couple of cars to get back up before we pitted. All in all, it was a pretty good weekend. I’m happy for the 04 car. I wish one of these weekends we could get all the DXDT cars on the podium.

George Kurtz | Fanatec GT World Challenge America powered by AWS
No. 04 CrowdStrike/DXDT Racing Mercedes-AMG GT3
I have to thank CrowdStrike, DXDT Racing and Colin. It’s been a tremendous weekend. We had some adversity yesterday but knew we had the pace. We put the time and effort in, and we got it done. It feels great. The car was great today. The DXDT team did a good job of getting the CrowdStrike car ready for today. We just put the effort in. We had the pace. We prepared in the off season and we did a great job. Colin just took it from the stop and put me in a great spot to succeed.

Colin Braun | Fanatec GT World Challenge America powered by AWS
No. 04 CrowdStrike/DXDT Racing Mercedes-AMG GT3
On a whole, I’m really proud of the Crowd Strike/DXDT guys. They had a lot of ups and downs this weekend and certainly they just kept working and working. We had a fast car all along. The GTA side of things went super smooth. George crushed the whole weekend over there. I was really proud yesterday of the effort. It was a big battle all race, and I was really happy everyone stuck through it and the result we got in the end was pretty impressive. It’s a lot of fun to drive this CrowdStrike Mercedes-AMG, and it’s cool to get a win in a home race for us. I’m really proud.

Erin Vogel | Fanatec GT World Challenge America powered by AWS
No. 19 CrowdStrike/DXDT Racing Mercedes-AMG GT3
We had some challenges in race one, which wasn’t ideal, but we were able to move on and still take some positions to earn a solid fifth place finish. That yellow allowed us to catch up to the pack and get back into the race. Michael did a great job in his stint, and we got a decent result all things considered. In race two, I was fortunately able to use the sticker tires that we chose to run today to catch up to cars that were immediately in front. I was able to get back in the race and that felt pretty good. I chased Taylor Hagler for a couple of laps until I made a little bit of a mistake and did a half-spin. She got away and it was great driving by her. I spent the last couple laps of the race fighting off Russell Ward in another Mercedes-AMG. It was a really great fight. I had fun racing with him and held him off in a photo-finish to come in P4, which we are happy with for our second race of the year.

Michael Cooper |Fanatec GT World Challenge America powered by AWS
No. 19 CrowdStrike/ DXDT Racing Mercedes-AMG GT3
Unfortunately, we had a seatbelt issue in the first stint in race one, but a yellow bunched us back up and allowed us to see where we stood with the other competitors and fight a little bit. After a pretty wild start in race two where I think we made up a couple of positions, the DXDT Mercedes-AMG GT3 was pretty good. We didn’t quite have the pace of the leaders, but I think both of our stints went pretty good. To come home P4 on first weekend gives us plenty to build on.

Kevin Boehm | TC America
No. 9 CrowdStrike/DXDT Honda Performance Development Civic Type R TC
It’s all down to teamwork. When we got here, the car wasn’t really suited to this track. Every time we went out there, we put our heads together and we came up with a plan. The final race here is a perfect example of not giving up and working together as a team. That’s how you eventually get the results. I’m definitely surprised it came that quick. I didn’t expect that race at all, but the car just felt amazing the whole time.