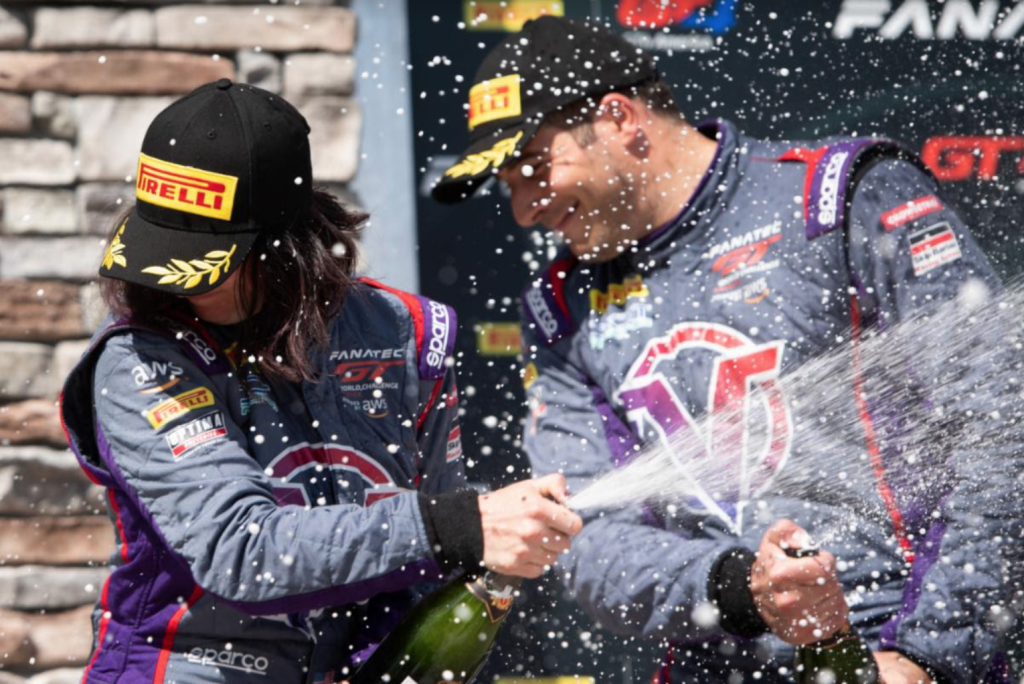 The team will close out the year at the season finale at Indianapolis Motor Speedway, with five cars running in the GT World Challenge America, GT America, and TC America series. The event will take place October 15-17, and will be open to spectators.

GT World Challenge America powered by aws
Race one-handed the duo of DXDT cars 90 minutes filled with attrition. From the green flag, both teams struggled to keep pace on the challenging circuit. While both teams executed flawlessly and ran a smooth race, the pair of Mercedes AMG GT3s struggled to gain position. The No. 19 Mercedes AMG GT3 of Erin Vogel and Michael Cooper had climbed to fifth place, but a mechanical issue forced Cooper to pit early, ending the team’s day. The No. 63 Mercedes AMG GT3 of David Askew and Ryan Dalziel finished the race, coming in seventh place.

Putting a difficult race one behind them, the No. 63 of Ryan Dalziel and No. 19 of Michael Cooper regrouped, ready to start from eighth and tenth overall on Sunday afternoon. In the opening lap, as the field charged through the first handful of turns, the car in front of Dalziel unexpectedly braked hard, leaving the Mercedes nowhere to go but into the back of the machine ahead. Dalziel was able to continue with only bodywork damage but received a drive=through penalty after he gained three spots to race second in class. Michael Cooper stayed close to Dalziel on the start, going side by side with the No. 88 Lamborghini of Madison Snow, and taking the position to race from third in class and sixth overall. Following the No. 63’s penalty, Cooper advanced up to second but lost the position to the No. 93 Acura of Dakota Dickerson. Both cars pitted during the mandatory window at the halfway point, each executing flawless pitstops and driver changes. A full-course caution brought the field back together as the pit stops were finishing, allowing each car to fight for position. Erin restarted in the No. 19 from third place, and Askew and the No. 63 from sixth with 30 minutes remaining. The Porsche ahead of Vogel struggled with pickup on the tires and she took advantage, claiming second place. She immediately closed the gap to Taylor Hagler in first place, and finished race two in second place, earning her third podium of the year with co-driver Michael Cooper.

With one double-points event left, the team remains in the Team Championship hunt, with three entries against the one Wright Motorsports Porsche. Final championship points will be awarded at the three-hour mark of the Indianapolis 8 Hour, in which the team will enter all three Mercedes AMG GT3 cars. The driver lineups for the trio of DXDT Mercedes will be announced in the coming days.

David Askew | Fanatec GT World Challenge America powered by AWS
No. 63 CrowdStrike/ DXDT Racing Mercedes-AMG GT3
It was a challenging weekend for the team, but we stuck with it and tried to make the cars better. Erin Vogel had a good weekend, which culminated in a second-place finish on Sunday. She was battling with Taylor Hagler, the other female Am driver, and that in itself is awesome: to see two women battling for the lead. Ryan and I had a difficult weekend. We had a hard time getting the car up to speed, but we finally made some progress and felt we had a good car by race time on Sunday. Then an unfortunate incident in the opening lap damaged the car. But we soldiered on and got the car through the first stint. We got me in the car, I finished the race and was able to beat a few cars.

Ryan Dalziel | Fanatec GT World Challenge America powered by AWS
No. 63 CrowdStrike/DXDT Racing Mercedes-AMG GT3
It was a tough weekend for the No. 63 car again. We just struggled to find a good balance most of the weekend. We started on the back foot with manufacturing a fault on a brake disk, that put us out most of day one. When we actually got on track, we were behind our competitors. Fortunately, we started making progress and today we would have a good car. The DXDT Racing guys worked hard last night and today to make big changes for us. Unfortunately, I got mixed up in an incident in lap one and ultimately got a drive-through penalty, though I feel the punishment didn’t fit the crime. But that’s racing and the mistake is on me. I don’t like to make them, so we have to regroup and come back stronger for Indy. I’m looking forward to that one. I think we’ll be really strong there. We were in a position to win last year until we had a mechanical issue. I’m looking forward to good things. We have a short turnaround, and the guys have a little bit of damage to fix, but I know that my crew appreciate that I left nothing on the table today. We’ll fix it and come back to Indy in a couple of weeks.

Erin Vogel | Fanatec GT World Challenge America powered by AWS
No. 19 CrowdStrike/DXDT Racing Mercedes-AMG GT3
I learned so much in race one on Saturday and I was able to bring that into race two, and just got out there. We actually practiced some discipline and saved our sticker tires for today, so I felt like even though the restart was pretty sketchy with a lot of dust and dirt on the track, I had great tires and was able to hang up there with those guys in the first few laps; which is always the most important thing. I just tried to be really consistent and steady today. Yesterday I was overthinking some things and so I just wasn’t on the pace. Today I was up there on the pace I wanted to have and I’m just really happy with this result. To be on the podium again, the third time this season, is pretty special.

Michael Cooper |Fanatec GT World Challenge America powered by AWS
No. 19 CrowdStrike/ DXDT Racing Mercedes-AMG GT3
That was a really good job by Erin and DXDT. She brought the car in clean and got us out on good tires just before the yellow in a good position. We even picked up one spot during Erin’s stint and chasing the leader there. A little more power and maybe we’d be walking away with the win. We’ll keep trying, we got one this year but we’d like to have another one.

TC America
Kevin Boehm’s performance of steady progression throughout the year continued at Sebring International Raceway, starting with him earning pole position in race one for TC America. He ran up front for the majority of race one until a competitor with a more advantageous setup managed to charge through the field from the rear to the front and take the win. In race two, Boehm started from fourth place, and climbed through the pack to race in first, but his race ended early after a damper broke, resulting in his first incomplete race of the season.

Kevin Boehm | TC America
No. 9 CrowdStrike/DXDT Honda Performance Development Civic Type R TC
Sebring was an up and down event for me. It started off strong in qualifying with pole position. I led a bunch of laps in race one and eventually fell to the second position, where we finished. I’m really happy with that result, especially since we have struggled in hot races in the past. Race two started off strong as well from fourth. We were leading by the end of the first lap and stayed there for a while, but got passed by a couple of cars. We were racey and had a good chance of moving forward at the end of the race. But we had a mechanical problem on the car and were unable to finish. We’re working on fixing that now and we’ll be ready for Indianapolis.