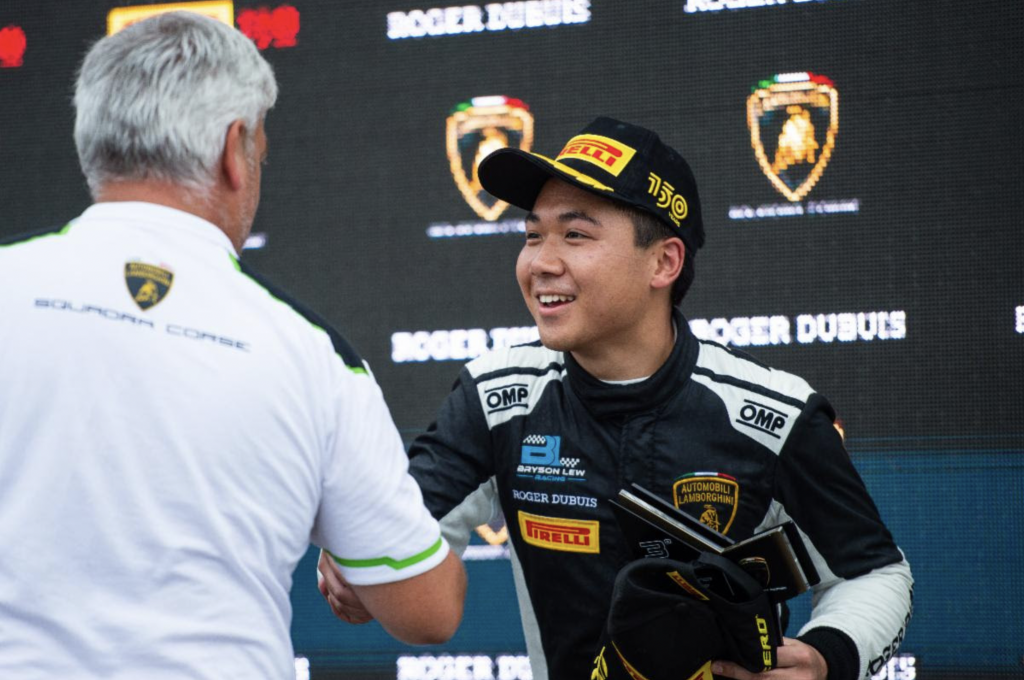 MORAGA, Calif., (September 19, 2022) – At just 19 years old, race car driver Bryson Lew is finding big opportunities for himself in the world of professional sports car racing. The California native and points leader in the Lamborghini Super Trofeo North America championship has been selected as one of fifteen drivers to participate in the Lamborghini Young Driver program. Created as a development opportunity for Lamborghini Super Trofeo drivers between the ages of 17 and 26, the program culminates with a final selection shootout held at Portimão Autódromo Internacional do Algarve, following the 2022 Super Trofeo Finals (November 5-6).

“Thank you so much to Lamborghini Squadra Corse for this amazing opportunity,” said Lew. “I’m absolutely honored to be selected for the Lamborghini Young Driver Program. It’s been a dream to be racing in the Lamborghini Super Trofeo series. As one of three drivers from the United States, I’m working hard to represent this outstanding manufacturer.”

Lew will depart for Italy in early October to undergo intensive assessments at Automobili Lamborghini headquarters in Sant’Agata Bolognese. Located about 81 miles north of Florence, the Italian manufacturer’s base will be the site of the next round of evaluations and challenges for the 15 participants of the Young Drivers Program. Following the assessments, the field of 15 candidates will be reduced to just six, who will then compete in the November shootout.

“I’m extremely excited to check out the breathtaking Lamborghini Factory,” said Lew. “It’s an honor to be invited out to train at one of the best facilities. I’ve been preparing countless hours to show them everything I have. My training includes the racing simulator, weight training, running, and mountain biking.”

Currently balancing his progressing racing career and his full-time studies at the University of Utah, Lew is no stranger to hard work. The young racer started racing at eight years old, building a long and impressive resume in karts before moving up to formula cars in his early teen years. Seeking to advance up the motorsport ranks, he received his SCCA full competition license at age 14. In 2020, Lew began to lay the groundwork for his sports car career in North America, racing in the SRO America-sanctioned TC America series, and earned three podiums in seven races. The following season, he advanced to GT4 racing, taking part in SRO’s highly competitive GT4 America championship.

For the 2022 season, Lew climbed the ladder once again, joining the Lamborghini Super Trofeo North America series, driving a Huracan Super Trofeo EVO2 with Precision Performance Motorsports (PPM). Racing in the Pro/Am class with John Dubets, the pair have had a remarkable season, winning six of the 10 North American rounds. Lew and Dubets have momentum on their side heading into the final two rounds at Portimão Autódromo Internacional do Algarve in November. With four consecutive wins and an 11-point lead over second place, the PPM drivers have the advantage for the finale event.

“It’s definitely been a tough year so far, competing against some high caliber drivers,” said Lew. “Luckily, at Road America and Virginia International Raceway we were able to win all four races.
This moved us into the lead for the championship going into our final races at Portugal in November. With racing, anything can happen so we’ll prepare as best as we can, and I look forward to racing in Europe again.”

Schedule and tune in information for the World Finals will be announced at a later date.

Following the World Finals, the final six drivers in the Lamborghini Young Driver Program will take part in the two-day shootout, which will include physical training, driving skills, and mental preparation. The winners of the shootout will receive official support from Lamborghini Squadra Corse for the 2023 season, leading to increased professional sports car racing opportunities for the talented young drivers.