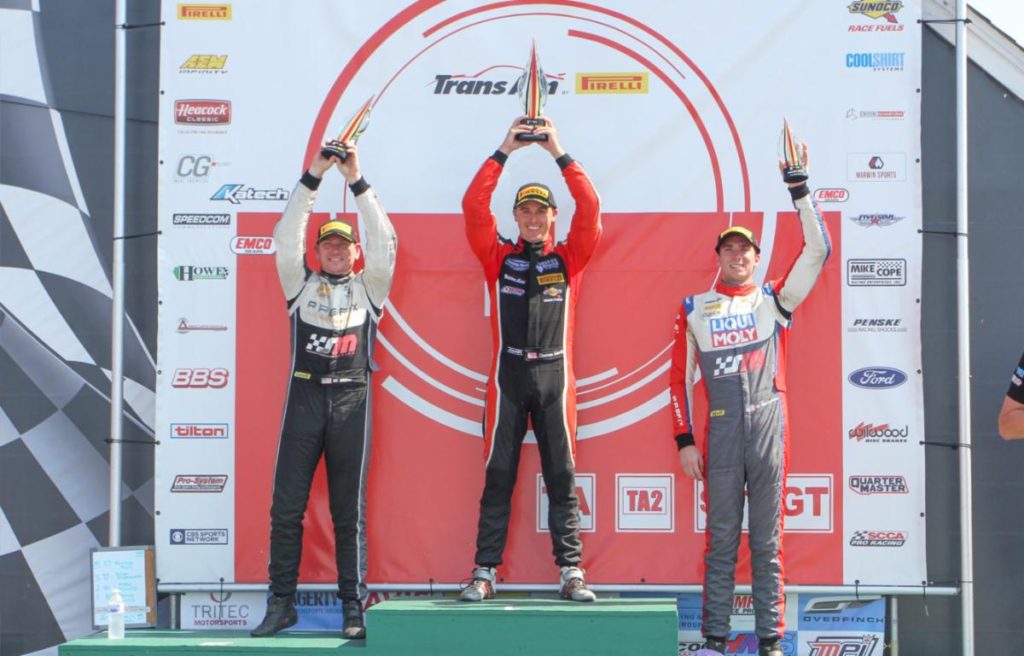 ALTON, Vir., (September 24, 2019) – Big Diehl Racing, Thomas Merrill, and the No. 81 Skip Barber Racing School Mustang earned their third win of the season on Saturday at VIRginia International Raceway, following an action-packed race for the Trans Am TA2 powered by AEM.

Narrowly missing out on pole position in qualifying, Thomas Merrill started the race in second place. Marc Miller slid past Merrill in the opening turns, but the trio stayed nose to tail throughout the first lap, each fighting for the coveted top position. Matos started to pull away as Scott Lagasse Jr. joined the pack in fourth, engaging in a battle over third with Merrill.

Roughly 25 minutes into the race, the field received its first full course caution, allowing the field to bunch back up and get close to Matos, the race leader. Ten minutes later, the field went back to green, and Miller dropped from second to fifth, putting Merrill in the position to fight for and take second with less than ten laps to go. With seven laps remaining, Merrill, Rafa Matos, and Scott Lagasse Jr. were in a three way battle for the lead. Mechanical issues forced Matos retire early, and a full course caution again brought the competitors back together, with Merrill leading the pack.

The race went back to green with three laps remaining, with Merrill and Lagasse fighting for the lead position, with Miller watching from third. As the duo charged into Oak Tree corner, Lagasse drove down the inside of Merrill, resulting in the No. 81 going into the grass on the exit of the turn. Heading down the back straight towards the hills of Roller Coaster, Merrill got a better run behind Lagasse, resulting in a side by side battle down the back straight. At the end of the straight, Merrill held the racing line, and Lagasse’s Camaro came in front of the No. 81, spinning across the nose. The car caught air, and flipped off circuit, resulting in the race finishing under caution.

“That’s not how anyone wants a race to end, but I’m glad everyone is okay,” said Merrill. “Everyone at Big Diehl Racing gave me a great car, and we showed excellent pace all weekend. It was great to be able to give them the win.”

Lagasse walked away from the incident unharmed, and Merrill was awarded his third win of the season. Just two races remain in the 2019 championship, the next being October 4-6 at Circuit of the Americas in Austin, Texas. At this time, Big Diehl Racing does not plan at being at either events.