Back with the Wright Stuff: Wright Motorsports Reveals 2021 IMSA Program

Back with the Wright Stuff: Wright Motorsports Reveals 2021 IMSA Program 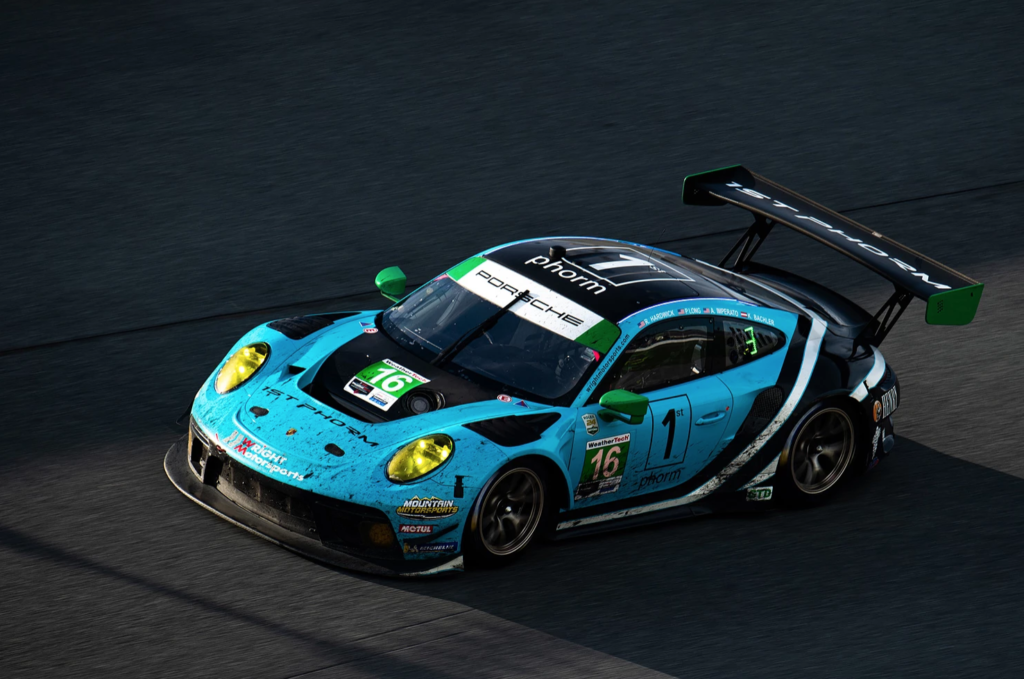 BATAVIA, Ohio, (December 17, 2020) – Following a successful season in the IMSA WeatherTech SportsCar Championship, Wright Motorsports will return to the professional sports car racing series in 2021 with an almost identical program. Led by John Wright, the operation will see full-season drivers Ryan Hardwick and Patrick Long return to pilot the No. 16 Porsche 911 GT3 R, again sponsored by 1st Phorm, Mountain Motorsports, and Una Vida Tequila. Jan Heylen, will again stand in as the endurance addition, and Klaus Bachler will join the team for the season-opening Rolex 24 At Daytona in January.

“We’re thrilled to be back for another year with the same group we had for 2020,” said John Wright. “Consistency was a big part of our success last year, and we’re starting off 2021 on the right foot by continuing with our proven formula. From the drivers, to the crew and sponsors, we really created a great organization, and I’m proud to have Wright Motorsports back for another year with all these people and partners.”

Consistency was indeed the name of the game for Wright Motorsports in 2020. The team finished just two points behind the class champions, with four podiums and eight top-five finishes. Their steady season-long progression culminated with victory at the Twelve Hours of Sebring, clinching the team’s first endurance win of its 20-year history. Although the win it itself was an impressive feat, it was not until after the race that the drivers revealed that the No. 16 Porsche suffered a broken left-rear shock for much of the race, likely failing in one of the first two stints. The race-winning result was not only a testament to the team for pressing on, racing on the bumpiest circuit on the calendar, but also showcased the reliability and competitive performance of the Porsche 911 GT3 R, out-performing a class filled with other manufacturers.

The No. 16 Porsche 911 GT3 R will again sport the blue, black, and white livery, showcasing the primary sponsorship from 1st Phorm, a leader in nutrition and sports performance supplements. Mountain Motorsports, a powersports dealership owned by Ryan Hardwick, will continue its support of the team, also joined by Una Vida Tequila, who first joined early into the 2020 season.

Together, Ryan Hardwick and Patrick long became a competitive pair, scoring two sprint podiums when just the two drivers shared the car. Jan Heylen first joined the duo at Road Atlanta’s six hour endurance race, assisting in securing the team’s first podium of the 2020 championship. At the Twelve Hours of Sebring, Heylen dominated the qualifying session, earning his first career IMSA pole position. Klaus Bachler will again support the team as an addition for the Rolex 24 only, where the team kicked off the year with a solid fourth place finish.

The schedule for the GTD class includes 12 events across North America, returning to the fan-favorite courses across the country. The Michelin Endurance Cup will again feature four endurance races in the 12-race calendar: The Rolex 24 at Daytona, the Twelve Hours of Sebring, the Sahlen’s Six Hours of The Glen, and Petit Le Mans. The 2021 season will also see the series expand from four classes to five: Daytona Prototype international (DPi), Le Mans Prototype 2 (LMP2), Le Mans Prototype 3 (LMP3), GT Le Mans (GTLM), and GT Daytona (GTD). The new season will also introduce a new points incentive for qualifying, awarding 35 points for pole position, 32 for second place, 30 for third, then declining by one point with each position, down to 30th in class.

The momentum from the season-finale victory will carry over to the new year, beginning with the Rolex 24 at Daytona, January 30-31. Introducing some new formats to the endurance classic, the starting grid for the Rolex 24 will now be determined by a 100-minute qualifying race the week before at the Roar Before the 24 test. The two-driver race will be mandatory for all Rolex 24 competitors, taking place Saturday, January 24. For all event information, visit imsa.com.

I’m really excited to be back with the same program that had a lot of success in the first year, and I’m looking to building on that success. For me personally, I’m really focused on continuing to improve as a driver and as a teammate. We expect to continue our 2020 success. The 2021 season will be even more competitive, with even more cars, great drivers, and strong teams to compete against. We feel we’re the best prepared team going into the new season, and we’re going to capitalize on our momentum from our Sebring victory to battle for that top step at Daytona.

I revel in the aspect of continuity. Having the band back together helps a lot with a view of keeping the momentum of where we left off in 2020. I expect the competition to only ramp up, so the work starts now and through the green dropping for the Rolex 24 in just over a month from now. Grateful to have our sponsors and partners back on board. I am looking forward to this!

It’s exciting to start the new season with the good momentum from last year! A strong second half of the season, ending with a win at the 12 Hours of Sebring, puts us in a good place to kick off 2021 at Daytona. It’s really special to go into another season with a team I call family, with Patrick, my best friend of 20 years, and Ryan who has welcomed me and has given me a home in his organization. I believe we have all the components to have a successful year and fight for the championship like we did last year. Porsche and PMNA played a key role in all the success we had in 2020 and I’m excited to be working with them again and their continued support going into the

In 2021 I will again have the honor of competing with John Wright and his amazing team for the Rolex 24h. Racing in Daytona is always a very special experience. I can‘t wait to push the car to its limits on this awesome track. I am looking forward to work together with Ryan, Pat and Jan.