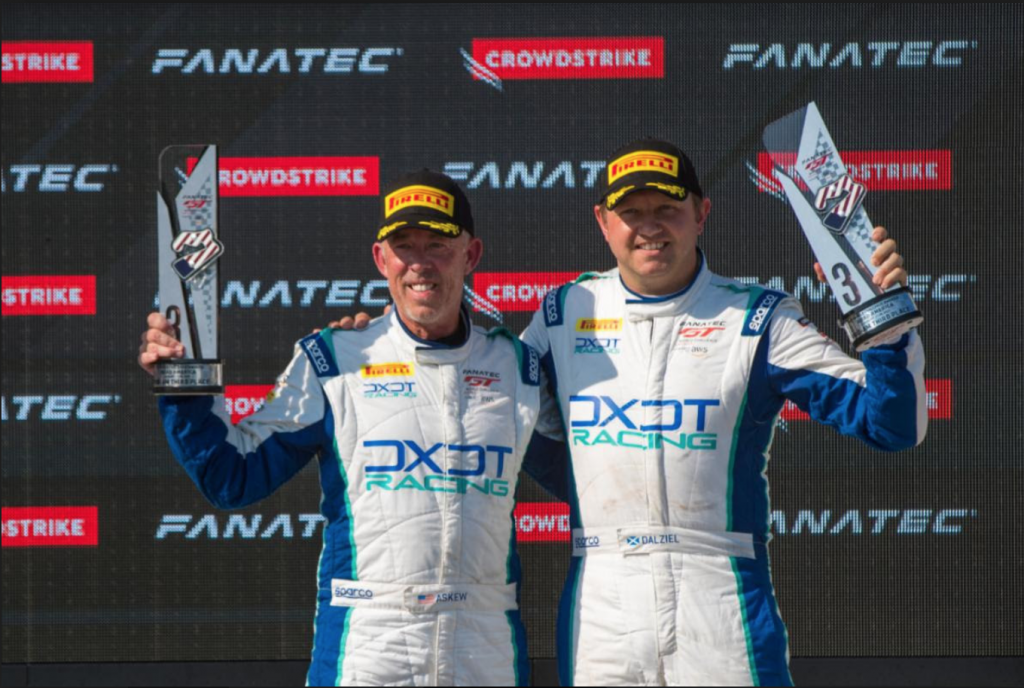 ELKHART LAKE, Wis., (August 30, 2021) – The heat turned up this weekend at Road America in the championship fight for the GT World Challenge America Series. DXDT Racing drivers David Askew and Ryan Dalziel returned to the podium this weekend after picking up a third place finish on Sunday afternoon in the No. 63 Mercedes AMG GT3.

The mid-west location threw various kinds of weather at the competitors, with heavy storms disrupting the schedule for the first two days of the four-day event. Despite the unpredictability of the weather conditions, the team made the most of the time on track, also utilizing the knowledge gained at a private test at the circuit before the event.

GT World Challenge America
Erin Vogel had her best qualifying session to date for race one, setting a lap time to start fifth in the No. 19 Mercedes AMG GT3, with David Askew directly behind her on the grid in seventh. Both cars immediately engaged in battles for position, holding off pressure from behind while focusing ahead. The No. 18 Lamborghini of Bill Sweedler finally caught up to Vogel and made the pass for position, but she swooped in and took it back just as he slowed on track. Both DXDT cars took advantage of the slower car, taking fifth and sixth in class, respectively. The pair of cars held position until the mandatory pit stop window, when professional drivers Michael Cooper and Ryan Dalziel took command of the cars for the second half of the race. The No. 19 received a drive-through penalty for a pit lane infection after the car started while it was still on the jacks. A late-race caution brought out the checkered flag early, with Dalziel finishing in fifth and Cooper in seventh.

Race two brought sunny skies and clear conditions on Sunday, and Michael Cooper led the team to green from third place in the pro/am class, while Ryan Dalziel started from sixth. The No. 19’s bad luck continued in race two when contact from one of the K-PAX Racing Lamborghinis sent the Mercedes spinning off course. Cooper was able to rejoin, but lost valuable position, running 13th. As the No. 91 Lamborghini battled with position for another car, it hit the No. 19, resulting in the Mercedes undergoing lengthy repairs to fix the front right suspension. The car was able to finish the race many laps down. Meanwhile, Dalziel put in a strong run in the No. 63 Mercedes, moving up to sixth after the sister’s contact trouble. With a 16 second lead over the next car back, Dalziel ran clear with no pressure behind. Askew took control of the Mercedes during the pit window and after a strong pit stop and smooth driving, the car climbed up to fourth in the pro/am class. Trouble stuck for the No. 93 Acura of Taylor Hagler, and the Acura lost great speed on circuit, allowing Askew to make the pass and run to the checker flag, earning a third-place finish for DXDT Racing, bringing the podium tally to six for the team so far this year.

The GT World Challenge America next heads to Watkins Glen International for the next double header of the championship, September 17-19.

David Askew | Fanatec GT World Challenge America powered by AWS
No. 63 CrowdStrike/ DXDT Racing Mercedes-AMG GT3
We came in here a little bit behind the ball, but we just kept working hard and we made the car better and we got to the point where we just concentrated on the basics and keeping everything clean and just driving a good race and it got us a result. That’s how racing works. You just pay attention to the basics and you keep fighting and eventually, something good happens. I’m pretty happy with that.

Ryan Dalziel | Fanatec GT World Challenge America powered by AWS
No. 63 CrowdStrike/DXDT Racing Mercedes-AMG GT3
It was a difficult weekend. We came in here pretty confident based on how good we were last year, and we just missed it a little bit, and then the weather wasn’t our friend. So we started a little bit behind. We made it better for race one, better for race two. The guys just worked really hard. David had a great stint and we had a nice clean-ish race which got us a podium, but I think we needed this one. It’s been a while since we got to stand on a podium, so we’ve got some work to do, but excited for this one.

Erin Vogel | Fanatec GT World Challenge America powered by AWS
No. 19 CrowdStrike/DXDT Racing Mercedes-AMG GT3
We came into our Road America weekend from a good test, but a test that we felt like we still had room to improve from. With the shortened practice day between weather and red flags during the race week, we didn’t have as much opportunity before the racing started to do everything we wanted to do. But I think we made a pretty good showing in qualifying–some of our best qualifying results to this date. I think we really had the pace this weekend, it’s just unfortunate we weren’t able to capitalize on it. We had a penalty for a pit stop infraction on the first day and then had some incidents with other cars in race two. We tried to complete 70% of the race, didn’t quite make it there; hoping to still get some points towards the championship from this weekend from race two. We did what we could and the team put in awesome effort to try to get us out on track again and hopefully we’ll bring all this momentum even stronger back to Watkins Glen later this month.

Michael Cooper |Fanatec GT World Challenge America powered by AWS
No. 19 CrowdStrike/ DXDT Racing Mercedes-AMG GT3
It was really just a day of what could have been. We kept all of our new tires for today and gave up yesterday to prioritize this race and I think we improved the car from yesterday, too. So it’s really just a day of what could have been. Getting spun by the Lamborghini in turn six going side by side the first lap was really unfortunate. These guys soldiered on and put the car back together to get us out there and see if we could make the distance to get points and just came up a little short. Everyone at DXDT and Erin did a great job this weekend. So we’re on to the next one.

TC America
The Road America doubleheader was a challenging one for Kevin Boehm in the TC America championship. While the 2020 TCA championship had strong starting positions for both races and was able to fight for podium positions in the first half of each race, the second half failed to play into his hands. Boehm still managed to earn a top-five finish, netting his sixth of the 2021 season. Already looking to the next event, the young racer and engineer has high hopes for his performance at Watkins Glen International September 17-19.

Kevin Boehm | TC America
No. 9 CrowdStrike/DXDT Honda Performance Development Civic Type R TC
It was a tough weekend for the CrowdStrike Racing / AWS / DXDT Type R TC. I started off strong in third during race one and fourth in race two, and was in podium contention in both, but this weekend wasn’t meant to be. Watkins Glen will be here before we know it and we’re not going to give up trying to reach that top step again, soon.