Despite what the public may think, my career is just like any other. I have requirements, contractual obligations and have to show up and do the job. Sure, it’s an added bonus that my office is a race car and a race trailer, and that I get to travel ten months out of the year and meet all kinds of people. But at the end of the day, it’s just a job. Being a Dad though, is something you never can turn your back on. While my particular career has me on the road often, when I return home, I am thankful to have the opportunity to spend quality time with my two sons. It is a blessing I look forward to. 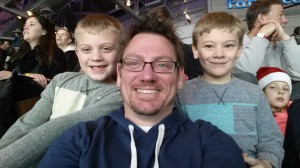 I have two sons, Evan and Seth. When he was two years old, Evan was diagnosed with autism. At the time, I felt completely lost. Every question you can imagine careened through my head like a runaway train. As a parent, you want the absolute best for your children. You want nothing to harm them, and especially at the age of just two years old, you want to know that their early years of childhood that they are just going to enjoy being a kid.

Autism, also called ASD for autism spectrum disorder, is a neurological disorder that effects communication and social interaction. Autism affects 1 and 88 children regardless of race, ethnicity or economic status. It is called a “spectrum disorder” because those diagnosed could present many different characteristics and varying degrees of disorders, from high functioning to very low functioning where aid is needed for everyday tasks or routines. For those that don’t have much experience with autism, it is possible they have encountered someone with autism many times and never realized it.

As we saw with Evan, you can see signs of autism within the first two years as symptoms can present early, which makes early intervention so important. There are programs and therapies available that can improve symptoms and increase the likelihood of getting your child a more mainstreamed education, which in turn increases the likelihood of better social development. We were fortunate enough to have the help of a local Autism Society chapter that helped us make the right decisions to get the best kind of care for my son. I don’t know where we’d be today if it weren’t for that amazing group of people. 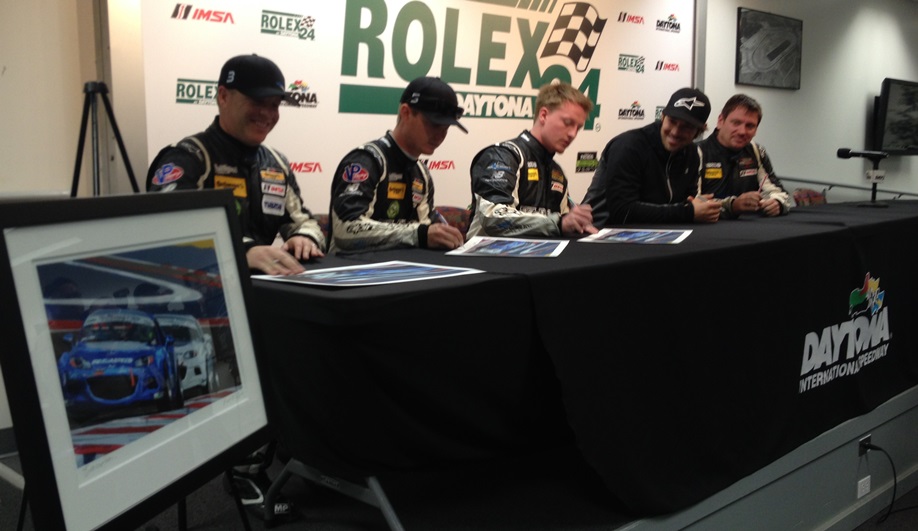 It’s because of their support that I want to do everything I can to give back and raise awareness. This year at the Rolex 24 Hours of Daytona, I wanted to do something special to help not just some autism chapters, but several charities. The incredibly talented motorsport artist, Doug Garrison, created a limited edition art piece of our MX-5. With support of my team owner, CJ Wilson and our entire team, several prints were created and designated each to specific foundations, including Camp Boggy Creek & the Austin Hatcher Foundation, two of the official charities of the United Sports Car Series, Autism Society Chapters as well as the CJ Wilson Children’s Charities. With the

help of IMSA staff and the support of the management and drivers of CJ Wilson Racing, we were able to host a press conference for an official signing, question and answer and photo session in the Daytona International Speedway Media Center.

The charity press conference in Daytona, which took help from a lot of people, and getting all the artwork and scheduling for everyone sorted out, was very rewarding. I have an immense amount of respect for people who champion charitable causes. It is easily a lot of work, planning and follow-through. Having said all that, I would do it again in a heartbeat as I was able to look at a representative of each charity that our program benefited in the eyes and see that what we accomplished meant something to them. That feeling alone made it worthwhile for me. 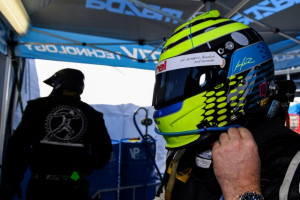 My team is very supportive in regards to assisting with charitable programs. My teammates are good guys, and never hesitate when it comes to a request do something to benefit kids in need. And when it comes to CJ, he himself started his own charity, CJ Wilson’s Children’s Charities, in partnership with Robert Champagne, all based on a chance meeting with Robert’s son, Micah, who has hemophilia. His charity benefits children going through chronic or life-threatening illnesses. That in itself shows the type of group we have as a team, which makes it a great environment to work in.

There’s no way to track our efforts to see the many or few we may have helped. But we don’t do it for the numbers or free publicity. We do it for my son and the many families out there who need help just like we did. If we’ve helped just one family, that makes it all worth it.