In 1973, Marlon Brando was chosen as the winner of the Academy Award for Best Actor for his now-iconic performance in The Godfather. As a means of protesting Hollywood’s portrayal of Native Americans in film, Brando not only declined the award but sent Native American actress Sacheen Littlefeather in his place to speak on his behalf.  Later that night, reporters asked actor John Wayne what his thoughts were regarding Brando’s actions. His response, “This is our only chance to contact the public as an industry. Don’t try to get me to say something against it. Go get Brando.”

That simple quote brilliantly portrays how much times have changed. The ability to make a call on a handheld cell phone wouldn’t occur until a month later. Floppy disks didn’t even exist yet. In 1973, a celebrity’s opportunities to personally interact with the public were few and far between.

Today, we turn on our cellphones and immediately have access to information, photos and people from all over the world. It takes mere seconds to research into the past (remember when you had to go to a library?) and see predictions of the near future. We’ve become the culture of immediate accessibility. Today, celebrities and brands have not one, but now countless portals to personally connect with the world at any time they like. How do you manage, interpret and control the flow of information coming into and out of your brand? Public Relations.

Where public relations actually first appeared is up for debate. As early as 50 BC, Julius Caesar wrote and distributed the first known newsletter, as an effort to enhance his reputation as a leader to the Roman public for a political future. By the 5th Century BC, the importance of public speaking and effective communications were being taught to members of the public. Now in the age of television, radio, magazines, newspapers, press releases, social media, websites and public appearances, to call the flow of information “vast” would be a gross understatement. Using all those mediums, public relations builds a brand and brings it to the world.

At each race event, every public relations representative hears, “Ugh, I’d kill to have your job…So what do you do exactly?” 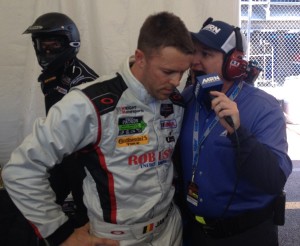 Although it looks like we show up, hang out with race car drivers, walk up and down pit lane with a fancy radio and stand around on our phones tweeting all day, there’s much more to it than that. It’s our job to be the source for stories and information regarding our clients and give them the tools to build a relationship with the public. Weeks before the event, we’re reaching out to the media affiliates who are local to the race event and pitching the stories of our clients in hopes they get featured. At the track, we manage the drivers’ schedules, book additional interviews, meet with partners, put the latest client information in the media center, conduct tours for fans and VIPs, hunt down drivers for quotes, then edit all the swearing out of the quotes, write and distribute press releases, get the drivers to and from appearances on time, create and activate fan activities, set up and tear down autograph sessions, fulfill race series media obligations, interact with fans, and last but not least, maintain social media outlets. I’m sure I’ve left a few things out, but you get the idea. After each event, we’re tracking the exposure of our clients, booking post-race interviews, and gearing up for the next race. Then the cycle starts all over again. 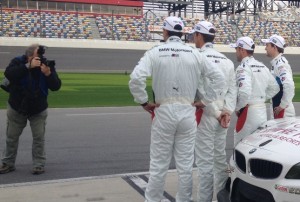 Public relations is so much more than a clever Super Bowl commercial, how many twitter followers you have, or how cool they think you are. It’s effectively connecting your brand with various groups of people, each on their individual level. It’s understanding the perception of your brand compared to both the reality behind the curtain and the desired perception. It’s cutting through the vast arenas of modern day communication to get your message out and be taken seriously as a credible and marketable source.

I can only help but wonder how differently John Wayne would have answered the question in the present day. With so many technological mediums available, would Maron Brando have even attempted to snub his award at the Oscars? I’d like to think his representatives would be hiding his iPhone to prevent what would be yet another Godfather style twitter rant to Hollywood executives, “You never wanted my friendship, and you feared to be in my debt. #BetterPortrayalOfAmericanIndiansInFilm”