(Kelly) Every year, I have an internal battle with myself as to whether or not it’s time to bring on someone to help take some of the workload for KBru Comm. Running a successful business takes a ridiculous about of time and effort, but this company is my baby, and handing anything over is incredibly difficult. Over the last few years, I’ve brought people on in very small capacities to test the waters, but the timing never felt right and something was always missing.

I had met Sarah previously at the 25 Hours of Thunderhill when we were both hired to help promote an effort running that year. We always kept in touch, and lightly discussed her joining me to gain some professional racing experience in public relations. 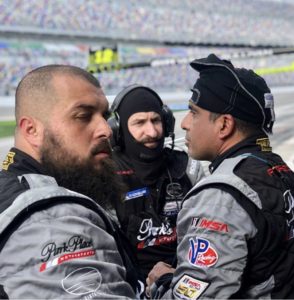 Then, as the Rolex 24 At Daytona loomed closer, my business increased exponentially. Five clients came on board for 2020, and two of them committed less than two weeks before race week. If it’s not obvious, that’s a massively overwhelming amount of work to do in such a short time, because media preparations for the Rolex 24 starts months in advance of the race. Of the five clients, two were brand new to IMSA, and two others were new to KBru Comm, and starting off on the right foot with each of them was incredibly important to me.

Thankfully Sarah was free, and the those two weeks leading up to the race were an absolute flurry to finish all the prep work for my clients while also giving Sarah a crash course in motorsport public relations, our clients, and IMSA, as she was completely new to professional levels of racing as well as the clients on my roster she’d be working with.

I’d be remiss if I didn’t thank Era Motorsport, Starworks Motorsport, and NTe Sport for trusting me in allowing Sarah to be a part of their programs for the week. Letting a newbie step in for one of the biggest races of the years was utterly terrifying to me, but they were all thrilled to be a part of someone’s professional development under the guidance of someone they trusted.

In short, Sarah was an incredibly fast learner. I tried to keep the information and work flow slow and steady, building on each day with each task. By race day, I ripped off her floaties and politely shoved her into the deep end, knowing she’d do great. She outworked many of our colleagues, and always with a smile on her face.

After 20 years of working in professional motorsport, it’s easy to become somewhat jaded to all the little things that make motorsport exciting. Watching Sarah’s eyes get wide over something at the track, or hearing her, giddy with wonder, tell a story from earlier in the day made me grateful to see the event and a series like IMSA from her eyes.

Following the event, I asked her to put together some thoughts about what it was like to attend and work the Rolex 24 At Daytona as her first professional racing event.

(Sarah) While I’m not new to racing, I was a complete newbie to professional racing. Sure, I’ve watched some F1 over the years on TV, but I have never actually attended a pro race in person. I knew exactly what to expect from an atmosphere standpoint; everything is bigger, faster, and flashier than club level racing, and by a significant amount. Though I knew this, it did not take away from the buzz of excitement felt being immersed in it.

There was a lot to learn and balance as part of a five-team week! I had been so anxious leading into the event about producing a quality of work that was fitting for pro-racing and being able to stay awake for the entire time, that I was actually quite surprised at what actually was the “hard” stuff for me do. 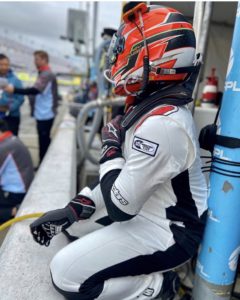 I had never been to Daytona before and I was quickly tasked with remembering important locations. While the Media Center was home base, I had to remember the teams’ garages, trailers, and pit locations, and how to connect all those dots as efficiently as possible. I may have gotten lost after lunch one day looking for the Media Center.

Being “bad with names/great with faces” was comically exaggerated with helmets, but my steepest and most surprising part of the learning curve was listening to and deciphering the team radios. While listening to radios, there is often multi-tasking; photographing/taking in what is visually happening in the pits as well as prepping social media posts. With three team channels in two different races, it was a lot of effort to learn who was speaking while performing other tasks and retaining the important audio information to relay to fans.

From a public relations perspective, it’s about sharing the team heart and soul with fans. Fast cars are rad, but to me, it’s the passion and talent that is what keeps them fast and makes the competition fierce and enjoyable to spectate. Learning the driver and team personalities became much more fluid as I spent days in their pits. I appreciate how welcoming they were to me photographing them so much!

From a logistics perspective, it was like watching an orchestra perform a masterpiece. There were many sections: teams, photographers/videographers, media, IMSA staff, track staff, and more, and they all produced their own part that together created an amazing experience. 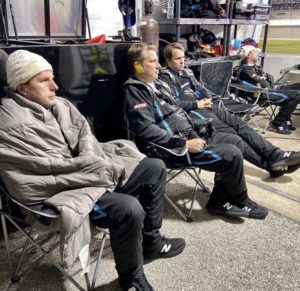 Twenty-four hours of racing is no joke. I sort of jumped myself right into the deep end of professional racing. With cars now being able to perform at a high level for that length of time much easier, every 10th of a second counts. From the use of technology to the plan from the strategist, to the perfection of the crew, and the need of the drivers to perform at their highest level, every little bit matters and even more so on lack of sleep. And this is already after days of practice, interviews, and meetings.

I have often teased that herding racers is more difficult than herding cats. Getting through photograph, autograph, and fan walk grid sessions was nothing compared to getting a winning team of racers from the pits to the podium!

Winning the Rolex 24 At Daytona or landing a spot on the podium in class is a massive effort and undertaking. There is constant pressure and many time-sensitive tasks that need to be accomplished simultaneously. But in the small empty moments, a strong bond between peers is formed and it’s definitely a family. I am so grateful to have had this experience and it was awe-inspiring to be a part of that bigger picture and masterpiece.

Q: Which was your favorite sounding car?
A: It was so loud in the pits and there was so much happening at all times that it wasn’t even in my mind singling cars out. My brain was in overdrive! That being said, I do like me some Porsche and Lamborghini. 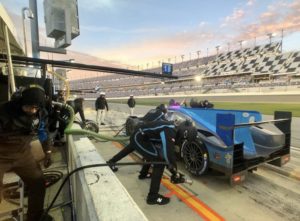 Q: Did you get to hear the Porsche GTLM leave the pit box? Was it as loud as I remember?
A: I didn’t! But based on my pit box experience around other cars, it was likely very loud.

Q: How many lug nuts did you handle?
A: One rogue lug nut! But I did help some of the crew spot them during pit stop clean ups in the Michelin Pilot Challenge.

Q: Any thoughts on the newer GTLM cars that had their IMSA debut at Daytona like the Chevrolet Corvette C8.R and Porsche 911 RSR-19?
A: Being my first event, I really didn’t pay too much attention to anything outside of the realm I was working in (LMP2). That being said, my personal general preference is that I am a Porsche fan and not a Corvette fan. One of the teams I worked with was pit directly next to Corvette, they definitely had a lot of interested people watching them throughout the weekend! I did think it was a cool experience to witness Jordan Taylor drive with this new team in such close proximity.

Q: What was your biggest fear or worry heading into your first 24 hour event?
A: I met Kelly at the 2018 NASA 25 Hour of Thunderhill, so I was pretty prepped for the 24 hour. That being said, my biggest fear was actually staying awake for the full time as I did nap a few hours at the 25 hour. KBru Communications has a long standing record of pulling through the entire event with hourly updates, so I was very nervous I would not be able to meet that standard! 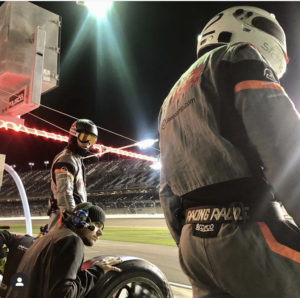 Q: Tell us about your overall experience. Initial expectations vs realized. What would you do differently?
A: To add a little more to my blog, based on this event alone, pro racing was everything that I expected and more. I was warmly received by other PR reps and both LMP2 teams’ hospitality crew immediately made sure I never missed a meal while running around. It was humbling to be welcomed so quickly and made to feel at home, it really helped me to feel comfortable and dig into work! I’m really big into efficiency, so I will be looking to better carry things for future events while in the paddock/pits. My pockets got pretty full when I had a phone, battery, scanner, and wide angle lens and I dropped things a bunch of times. While I did pack well and was over all comfortable through the night, I will definitely consider packing more or better layers for night racing.

Q: What did it feel like in person to hear all those powerful engines start up?
A: My nerves were a bit high for the race start, but it was INTENSE.

Q: Biggest misconception you had about working a 24 hour race? What was your favorite moment of the weekend?
A: Because I have worked the NASA 25 Hours of Thunderhill, I was pretty prepared for this event. One comical misconception I had was that my week’s healthy packed snacks would serve me well. Once I reached about 3:00am on Sunday I was grazing on all sorts of unhealthy things to fuel me through the night.

Q: How was it being on not just the big stage, but for 24+ hours at that?
A: Era Motorsport had assembled their effort for this race in just a couple of months. The emotions in the pit were high coming through the last few laps of the race and it was an honor to be able to share that really exciting moment with them. As for the 24 hours after, I was a wreck! I was falling asleep sitting up in the Media Center while proofreading a press release around 4:30pm Sunday. Even after a solid 8 hours of sleep, being up at 5:00am on Monday for my flight, I was still extremely foggy brain-wise and it took me until about Monday late afternoon to feel a decent amount of the fog lift.

Q: Who was your favorite team?
A: Team Kelly/Sarah! My favorite teams were the ones who trusted Kelly and let me spend the week working with them.

Q: Are you hooked on the IMSA series after your first experience?
A: For sure! But I do feel that I have now been spoiled being so close to the action.